Yoshi is a green dinosaur-like creature from the Super Mario series, his namesake being fellow Nintendo developer Yoshio Sakamoto. He has made cameo appearances in several Metal Gear games, specifically those that were developed for Nintendo systems.

Yoshi and Solid Snake both appear as characters in Super Smash Bros. Brawl. During a Codec conversation with Otacon, Snake says he's interested in catching Yoshi and eating him as food, to Otacon's disgust.

In Metal Gear Solid: Snake Eater 3D, Yoshi has replaced all the Kerotans, though many Yoshi locations have been rearranged from the original Kerotan hiding spots. When near Yoshi, the player will hear him making the same sound that he makes when sticking out his tongue. After shaking Yoshi, he also utters the cry he used in all of his appearances prior to Yoshi's Story. Para-Medic will also speculate that Yoshi was becoming popular to the Soviet Union if the player calls her upon discovering and/or shaking it. On a related note, the Kerotan rank was replaced with Yoshi, and Para-Medic instead talks about Yoshi when called about them.

Similarly, the GA-KO camouflage has been replaced with the Fruit Camo uniform. It performs the same functions as the GA-KO Camo did previously, just updated to reflect the overall change from Kerotan to Yoshi. The name and design of the uniform is a reference to certain items Yoshi can ingest in various Mario games, namely Super Mario World and Yoshi's Story.

Yoshi alongside Solid Snake returned to the roster in Super Smash Bros. Ultimate, playing a role in the story mode World of Light and also featuring their Codec conversations from Brawl.

Yoshi and Mario in Metal Gear Solid: The Twin Snakes. 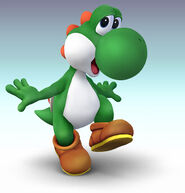 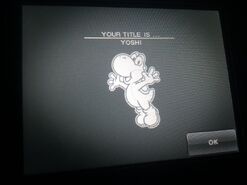 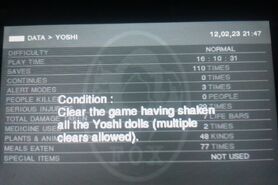 Retrieved from "https://metalgear.fandom.com/wiki/Yoshi?oldid=274855"
Community content is available under CC-BY-SA unless otherwise noted.