Yoji Shinkawa (新川洋司, Shinkawa Yōji?, born December 25, 1971) is a Japanese artist who was the primary character and mechanical designer of the Metal Gear series. He held this position from 1998-2015. Shinkawa also worked as a mecha designer for the Zone of the Enders games, and produced artwork for Call of Duty: Black Ops 3's Zombie Chronicles.

Born in Hiroshima, Shinkawa began working for Konami in 1994. He first worked as a debugger for the PC-98 version of Policenauts. He then worked as a graphic designer for the console versions of Policenauts. An early artwork of Solid Snake and Meryl Silverburgh from Metal Gear Solid is featured in the Policenauts: Pilot Disk for the 3DO. He was the lead artist on many of Kojima Productions' titles.

Shinkawa's illustration is generally praised as original and stylistic, yet technically accurate. According to Shinkawa, he is inspired by anime-related artists like Yoshikazu Yasuhiko and Yoshitaka Amano, but also more Western-related and less contemporary artists such as Frank Miller, Aubrey Beardsley, and Willy Pogany. He is also a big fan of French artists such as Mœbius.

Shinkawa at his art exhibit in the Smithsonian.

Shinkawa's art exhibit at the Smithsonian.

Shinkawa holding up transformed Vic Viper model. His sketch is also seen in the background. 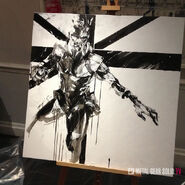 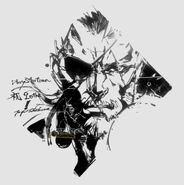