Venus was a female soldier who operated alongside the mercenary Snake, during the SaintLogic incident. An enhanced "Model 3" soldier created by SaintLogic, she worked covertly with the FBI as a private assassin.

At some point, Venus, a newer model of SaintLogic's supersoldiers, was deployed alongside a cleanup team to kill off the Model 3s under paranoia that they would revolt from having to kill the Model 2s. She encountered Snake, one of the Model 3 soldiers, and attempted to kill him via gunshot and left him for dead. In actuality, he survived, but was rendered amnesiac. She was then placed under the care of the man responsible for the Praulia Massacre, United States Department of Defense General Wiseman.

After learning of Snake's survival three years later, Wiseman orchestrated his return to the United States, and subsequent infiltration of SaintLogic's North American facility, in cooperation with ex-FBI agent Dalton. Venus was then sent by Wiseman to recover incriminating evidence from the base concerned with the Praulia Massacre, then destroy the facility, framing both Snake and Dalton. However, after Thomas Koppelthorn rebelled against his superiors at SaintLogic and threatened to use Metal Gear Chaioth Ha Qadesh to launch a neutron bomb, Venus was ordered to locate Snake to aid him in his mission.

After encountering and defeating SaintLogic's Chief of Security, Vince, Venus proceeded to interrogate him on Dr. Michiko Takiyama's whereabouts. She then intended to kill Vince under Wiseman's orders, but became distracted by Koppelthorn's activities with Metal Gear. She and Snake eventually met up with Dr. Takiyama, who was accompanied by a young girl named Lucy, and they escorted the two to their next destination. When Takiyama and Lucy later sided with Koppelthorn, Venus ended up saving Snake after he was injured in an attack by Metal Gear. She eventually managed to learn more on Koppelthorn's motives from SaintLogic President Rodzinski, after tricking him into believing that she had been sent by Vince to stop Koppelthorn.

Forced to locate an alternative route, Venus and Snake discovered the entrance to the sewers via "dowsing rods," and gained access using C4. They eventually reached the Prototype Factory in order to obtain a PSG1 rifle to destroy Cyphers guarding a bridge. Afterwards, the two infiltrated a hangar and, after defeating Vince for the final time, and sparing the guards by his dying request, encountered Metal Gear itself. Venus and Snake devised a strategy to destroy it, first while it was piloted by Koppelthorn, and then later when it was controlled by Lucy.

After locating Takiyama and the "Lucinda file" she had been sent to find, Venus turned on Snake, and was ordered by Wiseman to "mop up." The two duelled and she was ultimately defeated by Snake, but later decided to join forces with him once more. She followed Snake's command to aid Takiyama in escaping the facility, realizing that there was no longer a point to fighting Snake due to Wiseman having been placed under arrest, although she and Snake were separated due to falling debris. Venus had Takiyama drive a jeep they had procured, so that she could eliminate any pursuing Patrol Bots, while they escaped SaintLogic's main hangar. Venus later disguised herself as an Army medic and succeeded in helping Takiyama escape. She did so knowing that she would have ultimately been arrested for conspiracy alongside Wiseman, had she continued her original mission.

Venus is the name of the second planet in the Solar System. It is also the name for the Roman goddess of love. The Greek name for her is "Aphrodite."

A veteran warrior, Venus was completely ruthless in pursuing her mission goals, and possessed an unusual affinity for good luck. It was initially believed that she suffered from memory loss, although she herself claimed that she "had no memories to begin with." According to Wiseman, she was also slightly more unstable than Snake, although as evidenced by her actions throughout the events of Koppelthorn's insurrection, her instability was not severe enough to be a detriment to her mission. Because of her background, she feels no remorse for killing. In addition, because of Wiseman's involvement in her creation and his removing her free will, she is incapable of disobeying Wiseman's commands, an action that disgusted Dalton enough to attempt to punch Wiseman when he learned of this.[1]

Venus is one of the main characters featured in Metal Gear Acid 2 where she assists the player throughout the mission, and eventually must be fought by the player in a boss battle. Her status as the female partner to the player, and her personality within the story, can be seen as the alternative to Teliko Friedman featured in the previous Metal Gear Acid. During gameplay, when Venus is not being controlled by the player, Venus will jump up and down as if she has something stuck in her shoes.

Aside from her role in the main story, she, or rather, a monochrome palette swap for her acts as one of the opponents in the game's Arena mode.

Though Venus is seen to use shurikens in some cutscenes, they are never used during normal gameplay, since there is no equivalent weapon card.

As a playable character, Venus can perform three actions per turn and starts with 500 Life Points. She starts with the following 30 cards in her deck:

After the fight against Metal Gear Chaioth Ha Qadesh, depending on which version the player has, they will fight her as a boss. She uses the same deck as the player. An easy way of winning this battle is by luring her to the left side of a catwalk with Snake facing downward to her, and punch-punch-kick her over the ledge, landing an instant victory. This doesn't influence the outcome of the cutscenes to follow.

Venus is an unlockable character in Metal Gear Solid: Portable Ops, who can be obtained by having a Metal Gear Acid 2 save file on the PSP memory stick, and then doing a second playthrough. She can be found at the power substation, where the spy report for her arrival is titled "Alien Invasion?!" Even though she is a unique character, the manner in which she is obtained is similar to regular recruits (i.e., knocking her unconscious and then dragging her back to the truck, or dropping her off at a Sneaking Unit member hidden in a cardboard box).

The spy report describing her presence at the power substation stated that her appearance could only be described as "Venusian," and the report's title was given as "Alien Invasion?!", a reference to her out of place uniform and a wordplay of her name.

The North American password used as an alternate means of unlocking her is MGA2VE. She comes equipped with a survival knife. The EU equivalent is @VESPER. 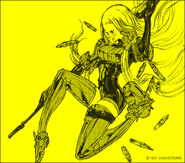 "A veteran warrior and subordinate of General Wiseman, she is completely ruthless in pursuing her mission goals. After Dr. Koppelthorne seized a private defense contractor facility, she infiltrated the complex alongside Snake in an attempt to end the crisis. Calls herself "Lucky.""
―Character description in Metal Gear Solid: Portable Ops Plus