A bionic myoelectric arm prosthesis was utilized by Venom Snake in 1984. The prosthesis replaced his left arm, as it had been lost in the aftermath of the Ground Zeroes Incident in 1975, although he was originally fitted with a simpler prosthesis. The newer arm was fitted shortly after his escape from the hospital in which he had spent nine years in a coma. The arm was designed and maintained by a Soviet bionics engineer, which he deemed his masterpiece.

Specifically designed for Venom Snake, the arm was originally white, but its default color was changed to red (although depending on the arm's current function, the arm can also be colored yellow [Stun Arm], blue with orange fingers and silver fingertips [Hand of Jehuty], gray [Rocket Arm], and black [Blast Arm], as well as carrying custom colors of silver and gold) and had more elegance than a real arm. It could be customized to include new gadgets and colors, including an upgradable battery that could deliver 120 volts to knock an enemy unconscious, a missile-based function where the arm would be launched from the stump and proceeded to be guided towards an enemy to take them out from afar, and a wisp-based function that would allow capture of various enemy personnel and prisoners from afar seemingly by teleporting them right infront of the user and briefly leaving them disoriented. The latter function is implied to have been developed due to Diamond Dogs capturing and researching the Legendary Ibis Jehuty. The second function could also use its explosive fumes to knock an enemy out cold if the arm remained attached, and was equipped with a miniature camera.

The first revealed variant of Snake's arm is called the Stun Arm, debuting in TGS 2014.

In a gameplay demo released on July 7, 2015, another variant called the Blast Arm was revealed with the ability to "rocket punch" Snake's hand similar to Zadornov at the end of Peace Walker. The hand can be controlled remotely and explodes on impact.

On July 31, Kojima unveiled a new image on his Twitter account regarding a new arm. It was colored blue and had the text "WISP" on it. The name "WISP" was a reference to Zone of the Enders, where it was a weapon to grab things from a distance.[1][2][3] In a gameplay demonstration released on August 5th during Gamescom 2015, this variant's official name was revealed as Hand of Jehuty. Also shown was the hand's ability to grab an enemy from a distance, and bring them in close for CQC. The player needs to complete the side op "Capture the Legendary Ibis" to unlock it (with the eponymous Ibis being named "Jehuty"). The description for Jehuty on the iDroid implies that it had been developed largely because of Snake's capturing the bird due to a legend that capturing the god Jehuty will have the person inherit his power.

In the PlayStation Live Gamescom 2015 demo, although not actually used, an arm type called Rocket Arm was briefly seen in the arm menu. It's description suggests it is a non-lethal equivalent to the Blast Arm. They also briefly showed the stun arm which had a different menu description from the TGS 2014 demo.

A golden bionic arm can be acquired either by downloading the save data from Metal Gear Solid V: Ground Zeroes, with the main Ground Zeroes mission completed, or otherwise by purchasing it as paid DLC released on November 17, 2015. A silver-colored bionic arm can also be unlocked for development by obtaining the Elite Rank Master Certificate for collecting every key item.

The Western release version of the "Collector's Edition" and the Japanese "Premium Package" will feature as physical inclusions to the set a half-scale version of Venom Snake's arm and a full-scale version, respectively. The latter version was eventually announced on January 6, 2016 to be released to North American fans.[4]

According to Hideo Kojima's notes in the Piggyback Collector's Edition Guide's art gallery, Venom Snake (or rather, Big Boss as he is identified in the notes) losing his arm was decided early on in the project, and also implied that he was supposed to lose two fingers from his right hand as well. He also mentioned that the powerful prosthetic arm was implemented to allow players to appreciate the full intended experience, as while Snake could technically still wield weapons, it would have made it difficult to appreciate such.

Konami ended up collaborating with Sophie De Oliviera Barata of The Alternative Limb Project to create a functional replica for an amputee Metal Gear fan.[5]

In the 2015 film Star Wars: Episode VII The Force Awakens, the character C-3PO was seen with a red-colored left arm similar to that of Venom Snake's bionic arm, with the similarities between the two even being highlighted in the tie-in Marvel comic "The Phantom Limb," dealing with how C-3PO got the arm. J.J. Abrams, the director for the movie, is real life friends with Metal Gear series creator Hideo Kojima, so the similarities were assumed to be deliberate.

There were originally supposed to be four additional arm types, which were called Medical, Parasite, Fire, and Archaea. These were cut, although the concept art for them can be found in the Art of Metal Gear Solid V.

Although not actually usable in Metal Gear Online 3 itself (Venom Snake aside), there were three different Bionic Arm models, each with a pre-set finger pose: One, colored metallic bronze, has the three sign in the American usage; the other, colored metallic silver, has the Peace/"V-for-Victory" sign, also known as the two sign. The last, colored metallic gold, had the index finger extended in a #1 pose, which were all distributed via a tournament on November 2017 and acted as the "trophies" for 3rd, 2nd, and 1st place winners, respectively.[6]

Advert for the Half-Scale Replica of Snake's bionic arm for the Collector's Edition.

Advert for the full-scale model of Snake's bionic arm for the Premium Package (Japanese only).

Hand of Jehuty uploaded by Hideo Kojima on Twitter. 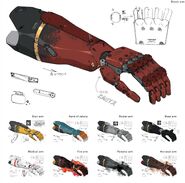 Retrieved from "https://metalgear.fandom.com/wiki/Venom_Snake%27s_bionic_arm?oldid=271567"
Community content is available under CC-BY-SA unless otherwise noted.