Log In to Edit
watch 01:48
'Metal Gear Solid' Lore: The Sorrow
Do you like this video?
Play Sound

Yasuhiro Masuda
The Sorrow was the "Spirit Medium Soldier" of the Cobra Unit. Although he had no actual unique combat abilities like the other Cobras, The Sorrow was gifted with the powers of a medium. He was able to summon the dead and assume their combat abilities by bringing their spirits into himself. Communicating with dead soldiers also gave him several advantages during a battle, such as learning of enemy positions. Like the other Cobras, his codename reflected the emotion he brought to the battlefield.

The Sorrow was born sometime during the early 1900s to early 1910s.[1] The Sorrow and The Boss fought together as part of the Cobra Unit during World War II and participated in the Allied landing at Normandy in 1944. During D-Day, The Boss was pregnant with her and The Sorrow's child and she gave birth to their son, who was then taken from them by agents of the Philosophers.

After the war, The Sorrow worked for the Soviet Union. He also converted a double agent planted in the Soviet Union by The Boss over to their side and gave fake analysis of the schematics of one of the Sputnik models. The Sorrow was unaware that The Boss was the one who planted the sleeper agent in the first place. After The Boss' failure in the Mercury Mission, The Sorrow and The Boss encountered each other in Tselinoyarsk in 1962. The Sorrow was ultimately killed by The Boss, at his own request, in order to ensure the safety of their son, whom the Philosophers had threatened to kill if both were to survive. Before he died, The Sorrow told The Boss that "the spirit of the warrior [would] always be with [her]." He was then killed by a bullet to the left eye that shattered his glasses. His son would later become a major in GRU, codenamed Ocelot.

In September 1964, during the Virtuous Mission, the surviving Cobras were reunited with The Boss, who had returned to Tselinoyarsk. The unit, under the employ of GRU colonel Volgin, were there to capture Soviet rocket scientist Nikolai Sokolov, whom CIA agent Naked Snake, was attempting to extract himself. The Boss' presence attracted the attention of The Sorrow's spirit, which had remained in Tselinoyarsk since his death. His spirit accompanied the rest of the Cobras, without their knowledge, as they made off with their prize, after Snake was thrown from the Dolinovodno bridge by The Boss. The Sorrow's remains were later seen by an injured Snake, before his rescue from Tselinoyarsk, located on the riverbank on which he had washed up.

The ghost of The Sorrow appeared to Naked Snake on several occasions, during the latter's return to Tselinoyarsk in Operation Snake Eater. As he did so, he often cried blood and was accompanied by rain falling from the sky. The Sorrow observed Snake during the events of his mission, and occasionally offered helpful hints, such as a key radio frequency. The Fury also mentioned joining The Sorrow in death, after being defeated by Snake in battle, realizing that The Boss would be the only Cobra left.

When Snake met The Sorrow in the spiritual realm, after jumping from a waterfall, he was forced to walk down a seemingly endless river, so that he would "feel the sorrow of those whose lives he had ended." As such, The Sorrow made Snake face the spirits of every single person he had killed during his mission in Tselinoyarsk, including those of the fallen Cobra Unit members. During this time, The Sorrow exclaimed, "You will all be killed by your sons," and, "You... no your sons, and your son's sons." He also told Snake that "light and darkness" dwelled within him, referring to the eventual conception of Solid and Liquid Snake.[2] However, he did not intend for Snake to stay forever, as evidenced by his comments when Snake encountered The Sorrow's corpse near the end of the spiritual walk. The Sorrow also projected images into Snake's mind with an attack, concerning the former's past and his death. He also left Snake with his last memory before his death before sending him back to the living plane of existence. In addition, he commented that Naked Snake was a "part of his sorrow," a statement that continued to haunt Snake after awakening. He reluctantly informed his C.O., Major Zero, after the latter promised to believe whatever he had to say. However, Snake grew irritated when Zero subsequently spoke to colleague Para-Medic within earshot, regarding his suspicion that Snake may be losing his mind.

The Sorrow later assisted Snake in Groznyj Grad by indicating how much time he had left before C3 explosives destroyed the Shagohod's hangar. As with previous thunderstorms, he was also present when Colonel Volgin was struck by a bolt of lightning, floating behind Snake's ally EVA and smiling. During this time, he also ended up doing something to Volgin's comatose body, which would have serious repercussions later on.

The Sorrow was last seen by Naked Snake towards the end of Operation Snake Eater, standing beside the ghost of The Boss in Rokovoj Bereg, reunited and vanishing together.

In 2014, The Sorrow's likeness made an appearance as one of Screaming Mantis's puppets. His puppet gave Screaming Mantis control over dead Haven Troopers in the vicinity. After Screaming Mantis was defeated by Solid Snake, the spirit of Psycho Mantis appeared to taunt his former enemy. However, a mysterious force threw him back to the spirit realm, followed by an appearance by The Sorrow, uttering the last words he had said as a human, from The Boss to Snake: "The spirit of the warrior... [would] always be with you."

The Sorrow felt much sadness for the death brought about by warfare, earning him his codename within the Cobra Unit. However, despite this, the ghost of The Sorrow was always smiling whenever Naked Snake saw him, with not one occasion where there was a frown upon his face. Conversely, The Boss, a.k.a. The Joy, rarely smiled during the events of the Virtuous Mission and Operation Snake Eater.

The Sorrow carried an M1911A1 in a U.S. M7 shoulder holster. Like the other Cobras, The Sorrow would carry a microbomb during top secret missions in enemy territory, which would detonate upon his death. Ultimately, however, he and The Boss, were the only members whose bodies were not destroyed by these bombs following their deaths.

The Sorrow was gifted with the use of ESP and precognition, as well as having medium powers. It was said that he could determine the outcome of the battle and strategize what would most likely happen next simply by communicating with the dead. After his death, he could summon angry spirits, as well as return them to the other side. He could make himself only seen by certain people and project images, in the shape of a transparent tablet or screen, with radio frequency coordinates for Snake to look for, as well as the digital projections, such as the countdown of Naked Snake's C3 timed bomb, and could show Snake how much time he had to escape.

Following his death, and the return of The Boss to Tselinoyarsk, the spirit of The Sorrow would often appear when it rained, possibly having summoned it himself. In fact, The Boss saw the rain as blood during the Virtuous Mission and stated that The Sorrow was crying when this rain happened. His spirit would also cry blood from his left eye, in reference to his fatal injury. When appearing in the mortal plane of existence, his spirit sometimes emits glowing red eyes.[3]

Ironically, The Sorrow is usually always seen with a sardonic smile on his face, and seems somewhat greatly amused by the various situations he often observes Snake embroiled in. This is in stark contrast to his compatriot and lover The Boss, who despite being codenamed The Joy, is shown as very methodical and austere, and rarely smiles.

The Sorrow (ザ・ソロー, Za Sorō?) appears as a boss character in Metal Gear Solid 3: Snake Eater. He is voiced by Yukitoshi Hori in the Japanese version, who had previously portrayed Vulcan Raven in Metal Gear Solid; another spirit medium with sixth sense traits. Hideo Kojima indicated in his commentary for Metal Gear Solid 3 that he based The Sorrow on American actor, writer, and director Ed Harris. Defeating The Sorrow in the HD version will unlock the achievement/trophy "River of Pain."

The revelation of Revolver Ocelot's parentage in Metal Gear Solid 3 implied that Ocelot had inherited a form of spirit medium powers from The Sorrow, his father, in order to explain how Liquid Snake's spirit was able to take control of his body. However, this explanation was disregarded in Metal Gear Solid 4: Guns of the Patriots, along with the supernatural aspects of Ocelot's possession. The Sorrow also makes a brief cameo in Metal Gear Solid 2: Bande Dessinée, where he expresses disappointment in Ocelot regarding his lack of control over Liquid's spirit.

According to Kojima, the river at which Snake encounters The Sorrow is inspired by the Sanzu-no-kawa (River of Three Crossings), which is a Japanese Buddhist concept of the afterlife. The Sanzu-no-kawa was split into three paths depending on the life the person had lived. In addition, he also planned to have The Sorrow quote the NOSE railway stops (a frequent occurrence in the Metal Gear series), as well as utter random words such as adenine, guanine, and thymine. However, it was cut because there were far too many sound elements in the battle as it was. Consequentially, it also resulted in them sacrificing the chance to appear in the Kobe newspaper.[2]

In Metal Gear Solid: Peace Walker, the specific circumstances behind The Sorrow's assassination by The Boss is elaborated on. A character portrait, used to represent a random recruit into the Militaires Sans Frontières, is based on The Sorrow's appearance.[4]

Although it was officially stated that his crying blood was a reference to the manner in which he died, it alongside it summoning rain also coincidentally had some similarities to Stigmata, which are widely known phenomena often associated with divine miracles, especially in Catholic beliefs.

The Sorrow appeared in the Versus Battle page on the series official site, first against The Pain, and later against Psycho Mantis.

"STRENGTHS:
ESP, Talks to Dead, Takes Their Skills
WEAKNESSES:
Burdened by Sadness for the Lost
FEATURED FACT:
So noble was the “Spirit Medium Solider” that he asked The Boss, the mother of his child, to kill him in order to ensure the safety of their son
FEATURED GAME:
METAL GEAR SOLID: THE LEGACY COLLECTION"
―The Sorrow's bio on Versus Battle; during his fight against The Pain

"STRENGTHS:
Cobra Unit Commander & Channeler of the Dead
WEAKNESSES:
Philosopher Kidnapping of His Son
FEATURED FACT:
Naked Snake last glimpsed The Sorrow at the conclusion of Operation Snake Eater materializing beside The Boss’s ghost, reunited again
FEATURED GAME:
METAL GEAR SOLID: THE LEGACY COLLECTION"
―The Sorrow's bio on Versus Battle; during his fight against Psycho Mantis

The Sorrow, alongside his comrades in the Cobra Unit, also appeared in the Ground Zeroes app, acting as officer characters in the Mother Base Developer. The Sorrow specifically is unlocked by obtaining 50k+ points on hard Classified Intel Acquisition while connected to the app.

One of The Sorrow's jumpscares. 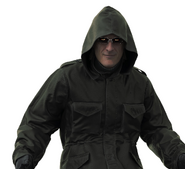 The Sorrow as he appears in the pachislot adaptation of Metal Gear Solid 3.

The Sorrow as he appears in the pachislot adaptation of Metal Gear Solid 3 (SP version). 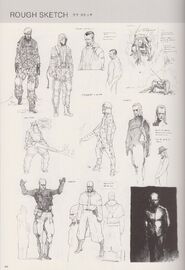