The Pain was the "Hornet Soldier" of the Cobra Unit.

The Pain was born sometime during the mid 1900s to early 1910s.[1] At an unknown point in time, he was infected with parasites that gave him the ability to secrete pheromones to give him control over insects and receive large amounts of adrenaline in response to pain.[3]

During World War II, he became a member of the Cobra Unit, a secret special forces unit composed of elite soldiers from the Allied Forces, led by The Boss. Helping to lead the Allied forces to eventual victory, the unit was disbanded at the end of the war.

In August 1964, during the Virtuous Mission, The Pain was reunited with The Boss and her Cobras. The unit, under the employ of GRU Colonel Volgin, captured Soviet rocket scientist Nikolai Stepanovich Sokolov from Tselinoyarsk, USSR, whom CIA agent Naked Snake, was attempting to extract himself. Approaching the suspension bridge in Dolinovodno by helicopter, which Sokolov and Snake were attempting to cross, The Pain distracted Snake with his large swarm of hornets, while his comrade, The Fear, used a zip line to descend from the gunship, and capture Sokolov. After Snake was thrown off the bridge by his former mentor, The Boss, The Pain commented that "the new blood [had] been rejected," and the unit then fled with their prize.

During Naked Snake's return to Tselinoyarsk in Operation Snake Eater, The Pain discovered his whereabouts at Bolshaya Past, as Snake duelled with GRU Major Ocelot. The Pain sent out his hornets to scout ahead, and they ended up attacking both men. While Ocelot escaped unharmed, thanks to his fancy gunplay, Snake accidentally fell into the crevice[4] and escaped being stung to death. After traversing the enormous, pitch-black cavern of Chyornaya Peschera, he encountered The Pain in a flooded chamber. The Pain was ultimately defeated by Snake, despite his extraordinary ability to control hornets, where upon his death, his microbomb (with which all of the Cobras were fitted) activated, destroying his corpse and his entire swarm. He was the first of the Cobras to fall in battle with Snake.

Code Talker later researched records regarding the remnants of The Pain's body that could be recovered in an attempt to discover how he could control his swarms of bees.

The Pain was a towering giant over 2 meters tall and had the ability to control large swarms of hornets at will. As a result of this, his face was covered with welts from the stings. He controlled the bees by secreting heterogenous pheremones from his body that made him like a "queen" to them. He gained this ability when he was infected with a parasite, one that was able to secrete the pheremones itself. He also carried a queen bee in the pack on the back of his hips, using the sound of her wings to help guide the hornets. Additionally, he carried a large array of pheromone vials on his vest, which he flung at enemies to guide hornet swarms at them. His bees also came out of a ventilation opening on his suit, as well as entered his body through it.

Besides his hornets, The Pain was armed with a Tommy Gun and grenades, and could use hornets in conjunction with these weapons. He could protect himself from gunfire and other attacks by coating himself with a layer of hornet armor, although this shield was easily broken with any heavy weaponry, such as the M37 shotgun or an explosive grenade. He even had the ability to create an exact duplicate of himself, shaped out of hornets, used to confuse and deter his enemies.

The Pain also raised special hornets called "bullet bees" inside his own body. After he removed his balaclava, the bullet bees would be released from his mouth. They moved at extraordinarily fast speeds, and upon contact with enemies, they burrowed into their bodies and begin eating their insides until they eventually died.

The Pain's codename signified the unbearable torment he felt while on the battlefield. However, The Pain also received extreme amounts of adrenaline when undergoing pain due to one of the parasites within him, giving him very bittersweet reactions. The Pain was also somewhat flamboyant, as evidenced by some of his erratic movements during the battle.

The Pain (ザ・ペイン, Za Pein?) had the ability to command his hornet swarm, partially due to the sound produced by the queen wasp contained within his backpack, as revealed in the Metal Gear Solid 4 Database. This information was previously given in the unreleased voice casting sheet for Metal Gear Solid 3: Snake Eater.[1] Likewise, in the voice casting sheet, it was also intended that he also create makeshift grenades by throwing beehives at his enemy so it detonates and releases hornets. However, as he is shown using frag grenades in the final version, it was dropped.[1]

While the sound of the queen wasp was used to assist in controlling his bees, in Metal Gear Solid V: The Phantom Pain it was revealed by Code Talker in a cassette tape that The Pain actually had the ability to control a variety of insects besides bees by secreting heterogeneous pheromones from his body, making him like a "queen" to them.[5] This ability was bestowed upon him by a parasite that he picked up at an unknown point in time. Another parasite allowed him to receive large amounts of adrenaline in response to pain.

During the Virtuous Mission, the noise from the hornet swarm, which appeared at Dolinovodno, was intended to disguise the sound of the rotorblades of the Hind A carrying the Cobra Unit.[6]

During the boss battle with The Pain, it is possible to capture his bullet bees inside a Baltic Hornet's Nest. This makes the nest even tastier and gives the player greater recovery of stamina. In addition, the name turns into Hive of Pain Hornets Nest. In addition, if the player dons the Snow camouflage uniform and face paint, The Pain's bees won't attack. According to director Hideo Kojima, this was inspired by a leisure trip at Karuizawa when he visited a honey shop, where wearing white is a famous bee-keeping trick.[4]

Draining The Pain's stamina allows Snake to unlock the Hornet Stripe camo. The camo prevents Snake from being stung, should he shoot down a hornet's nest, causing the insects to follow him instead. It also prevents animals like leeches from attacking Snake in swamps, as well as spiders and scorpions.

Defeating The Pain in the HD Edition will unlock the achievement/trophy "Pain Relief."

In the Metal Gear Solid 3: Snake Eater Official Strategy Guide by BradyGames, it claimed that The Pain ostensibly developed his rare gift for hornet control by allowing thousands of the insects to sting him for months at a time, until the hive came to believe that he was in fact another hornet himself. It also inferred that his intense willingness to suffer pain for his art is what enticed The Boss to recruit him for the Cobra Unit.[7] However, this was proven false in The Phantom Pain, where it implied that he received a parasite that controlled insects.

In his sound files, he can be heard uttering the phrase "Rifle!", suggesting that he also had the ability to make a rifle of sorts appear in his hands in addition to a Tommy Gun and grenades. This was cut from the final version, however.[8]

The Pain later appeared on the Versus Battle page for the series official website.

The Pain, alongside his comrades in the Cobra Unit, also appeared in the Ground Zeroes app where they acted as officer characters in the Mother Base game. The Pain is specifically unlocked by send an enemy flying 20m or more while playing the app with Ground Zeroes. 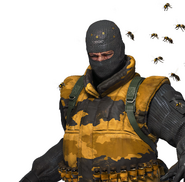 The Pain as he appears in the pachislot adaptation of Metal Gear Solid 3.

The Pain as he appears in the pachislot adaptation of Metal Gear Solid 3 (SP version).