The Fear was the "Spider Soldier" of the Cobra Unit. As with the other members of the unit, his codename came from the emotion he conveyed while on the battlefield: the terror that he instilled in others with his freakish appearance and movements.

The Fear was born sometime during the mid 1900s to early 1910s.[1] During World War II, he became a member of the Cobra Unit, a secret special forces unit composed of elite soldiers from the Allied Forces. Helping to lead the Allied forces to eventual victory, the unit was disbanded at the end of the war.

In September 1964, during the Virtuous Mission, The Fear was reunited with The Boss and her Cobras. The unit, under the employ of GRU Colonel Volgin, captured Soviet rocket scientist Nikolai Stepanovich Sokolov from Tselinoyarsk, USSR, whom CIA agent Naked Snake, was attempting to extract himself. Approaching the suspension bridge in Dolinovodno by helicopter, which Sokolov and Snake were attempting to cross, The Fear used a zip line to descend, upside-down, from the gunship, and capture Sokolov, while Snake was distracted by The Pain's hornets. After Snake was thrown off the bridge by The Boss herself, the unit then fled with their prize.After Snake returned to Tselinoyarsk, during Operation Snake Eater, The Fear ambushed him in Graniny Gorki, shooting him in the leg with a bolt coated in the venom of the Brazilian wandering spider. The Fear had also re-laid multiple booby traps throughout the area, and used stealth camouflage during the fight. Although he successfully poisoned Naked Snake, he then proceeded to tell him to stop the poison if he wished to fight, hinting that he desired to take out Snake in a fair fight. However, despite The Fear's enormous advantage, he was ultimately defeated by Snake. Upon his death, his microbomb (which all of the Cobras carried) detonated, destroying himself, and sending out a lethal shower of his remaining crossbow bolts, which Snake narrowly avoided.

The Boss later retrieved one of his crossbows from the forest, bringing it to Colonel Volgin as proof of his death. Major Ocelot then used it to threaten Tatyana, after becoming suspicious that she may be a spy.

As evidenced by his codename, he was obsessed with the concept of fear, especially the ones generated on the battlefield. Because of this obsession, he also underwent extensive surgeries to have double joints, a forked tongue, and apparently gold reptilian eyes. Nonetheless, he seemed to have some degree of honor during his fight with Naked Snake, as he advised Snake to cure himself of his poison if he wished to fight him shortly after successfully using a poisoned dart on him.

To inspire fear in his enemies, The Fear used a base model prototype stealth camouflage, which rendered him virtually invisible by bending light around his body. However, since the technology was in an experimental phase of development during the time of Operation Snake Eater, it quickly drained his stamina and he would get hungry fairly often.

Because of his suit, he frequently ended up starving, which also sometimes resulted in him hunting for animals with an almost animalistic behavior. The Fear was known for his seemingly superhuman speed and agility. Double-jointed in both elbows, he was able to crawl, flip, and leap with extreme agility, in the manner of a spider, as well as climb and jump around in trees with ease. The Fear had some lizard-like qualities, as well: he possessed a long, surgically forked tongue that he could use to grasp objects, and was somehow able to run on water in a manner similar to a frilled lizard. He also used a variety of zip lines to enhance his mobility as well as hang upside down and ambush enemies.

In battle, The Fear armed himself with two crossbows, the William Tell, and the smaller Little Joe. He coated some of his crossbow bolts with the venom of a number of poisonous animals. The Fear also employed frag grenade arrows, as well as white-phosphorus grenade arrows. Due to his speed and flexibility, he was also extremely formidable at close quarters combat.

The Fear (ザ・フィアー, Za Fiā?) appears in Metal Gear Solid 3: Snake Eater, in which he is fought by the player during a boss battle. The Fear's optic camouflage, and his abilities such as moving from tree to tree to hunt his prey, are considered a tribute to the science fiction film franchise Predator. Defeating The Fear in the HD Collection version results in an trophy/achievement called "If It Bleeds, We Can Kill It"; a direct quote from Arnold Schwarzenegger's character in the original 1987 film Predator. His English voice actor, Michael Bell, previously provided the voice of Duke in the G.I. Joe series, which coincidentally featured a terrorist organization known as Cobra.

The Fear's design, more specifically his spider-like method of walking, was based on a rejected design for Raiden.[2][3]

The Fear appeared in the Versus Battle feature on Konami's official Metal Gear Solid website.

"STRENGTHS:
Inhuman Speed, Agility, & Invisibility
WEAKNESSES:
Human Honor?
FEATURED FACT:
The Fear was named for the terror he inspires in his enemies due to his freakish insect- and animal-like abilities
FEATURED GAME:
METAL GEAR SOLID: THE LEGACY COLLECTION"
―The Fear's bio in Versus Battle

The Fear, alongside his comrades in the Cobra Unit, also appeared as characters in the Ground Zeroes app, acting as officer characters for the Mother Base Developer. The Fear specifically was unlocked by obtaining a lethal headshot of 300m+ while connected to the app.

The Fear at Graniny Gorki South. 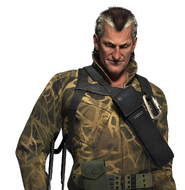 The Fear as he appears in the pachislot adaptation of Metal Gear Solid 3.

The Fear as he appears in the pachislot adaptation of Metal Gear Solid 3 (SP version).
Add a photo to this gallery