TX-55 Metal Gear was foreseen in Elisa and Ursula's prophetic vision in 1970.[1]

After founding the nation of Outer Heaven, Big Boss knew that he would need a powerful deterrent in order to stand a chance at opposing Zero and Cipher. Big Boss thus constructed the one thing that he knew the West would fear more than anything else: Metal Gear.

A first attempt made by Big Boss's Militaires Sans Frontières in 1974 resulted in the creation of Metal Gear ZEKE. However, ZEKE was destroyed several months later, when MSF came under attack by Cipher's rogue strike force, XOF.

In 1995, Outer Heaven forces kidnapped Dr. Drago Pettrovich Madnar, the foremost expert in the field of robotics to build a new Metal Gear. While Dr. Madnar understood the power and inherent evil of his creation, the kidnapping of his daughter forced him to complete it.

TX-55 Metal Gear was a revolutionary weapon because of its ability to launch a nuclear attack from any stable territory, without the need for a nuclear silo. Unlike its predecessor ZEKE, it possessed two nuclear warhead launchers, yet it had a much more compact size. Feared by the Western powers, its mere presence in Outer Heaven made the country virtually untouchable, except by a covert mission.

TX-55 was armed with two 15 mm machine guns, a laser cannon and multiple medium-range warheads. However, none of its arsenal was put to use as the TX-55 was destroyed by Solid Snake before its completion, by plastic explosives over its feet, where the armor was weakest.

The TX-55 was later revealed to be a prototype for Metal Gear D,[2] the construction of which was commissioned by Big Boss during the Zanzibar Land Disturbance.

Though its very existence was considered to be a direct threat to the Western powers, TX-55's main purpose was to act as Outer Heaven's nuclear deterrent. By contrast, Metal Gear REX (one of the TX-55's successors) was created in 2005 under the false premise of being a Theater Missile Defense (TMD) system.

TX-55 Metal Gear utilized three sensors: a camera sight, a TV sight, and a lower sight.[3] In addition, a sky alert radar was equipped onto its nuclear launch module, along with a rear alert pulse sensor. It was also equipped with both a polyphonic and monophonic antenna.

TX-55's gun module houses two 15 mm machine guns and a 20 cm laser cannon. The cockpit itself is also heavily armored. Air nozzles are also equipped to the nuclear launcher. When firing a nuclear missile, TX-55 would extend a stabilizing leg from its rear and secure itself to the ground in order to conduct an accurate launch.[4] It also possesses a large projector. Its overall armor is composed of 30-110 mm tungsten armor with a special heat-resistant ceramic, which was weakest on its legs.

TX-55 Metal Gear is the first Metal Gear weapon featured in the series, making its appearance in the original Metal Gear. The player does not fight TX-55 directly, and must instead avoid two gun cameras that protect it, while planting explosives at its feet in a determined order. Although described as being armed with a 15 mm "Vulcan gun" in the game's user manual, this is contradicted by the TX-55's actual appearance, which possesses single barrel weapons on its gun module, as well as the fact that the M61 Vulcan is a 20 mm caliber weapon. The Metal Gear Solid 4 Database instead refers to them as simply "machine guns."

The Metal Gear summary in the Previous Operations section of Metal Gear Solid (and its remake, The Twin Snakes) mentions that the TX-55 utilized antitank missiles.[5]

Although the TX-55 is mentioned in the Nintendo Entertainment System version, it is never fought at all. According to the sub-programmer of the NES/Famicom version, Masahiro Ueno, they removed the TX-55 boss fight due to hardware limitations.[6] Instead, Snake had to destroy the Supercomputer with C4 explosives, without it being in any order, in the 100th basement floor that controlled TX-55 Metal Gear's activities, suggesting that in this version the TX-55 was unmanned.[7]

Mass-produced models of the TX-55, which are referred to as "Metal Gear 1", appear in the non-canonical sequel Snake's Revenge. In the game, they can be seen on board an enemy cargo ship, in which they are being transported.

The specifications for Metal Gear 1 feature in the game's opening, as shown in the table to the right. Although most of these are similar to the original specs, the armor thickness is defined and the weight is implied to be ten times heavier than the original model (this is possibly a mistake during conversion to imperial units). The code number "VRC-4" is also the name of a memory management controller (MMC) chip designed by Konami for use in NES cartridges.

The TX-55 also appears in the Game Tiger version of Snake's Revenge, although this time they are a recurring boss late into the game and are actually fought.

The TX-55 Metal Gear was mentioned in the 1988 gamebook sequel to the Famicom version of Metal Gear, where it was destroyed by Solid Snake during the Outer Heaven incident two years prior. In addition, a large part of the plot for the gamebook dealt with a terrorist organization managing to mass-produce the mech, and Snake being called in to halt the production.

The wreckage of the original TX-55 appears in Stage 11 of Metal Gear: Ghost Babel. Contacting Roy Campbell while looking upon it will result in a Codec conversation relating to it.[8] A similar scenario later occurs in Act 4 of Metal Gear Solid 4: Guns of the Patriots, where Solid Snake returns to Shadow Moses Island and finds the wreckage of Metal Gear REX.

Artwork for the TX-55 was shown in the retrospective in the 25th Anniversary DVD Metal Gear Saga, itself originally part of the Metal Gear Retrospective pre-order bonus DVD for Subsistence. However, the artwork shown was not official artwork, but rather fanart originally created by the artist Chidach and used without his permission.[9][10]

The TX-55 makes a cameo appearance in Metal Gear Solid: Portable Ops during a montage late into the game in the form of Elisa/Ursula's dying prophetic vision to Big Boss.

The wreckage of the TX-55 in Ghost Babel. 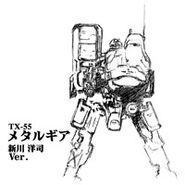 TX-55, as depicted in The Art of Metal Gear Solid, by Yoji Shinkawa. 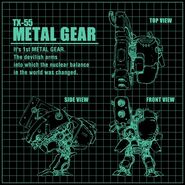 Multiview fanart of the TX-55 by Chidachi, used in the official Metal Gear Retrospective.