Sunny Emmerich was a child prodigy in computer programming, the daughter of Olga Gurlukovich and the adopted daughter of Dr. Hal "Otacon" Emmerich.

Olga Gurlukovich gave birth to Sunny at a hospital run by the Patriots, who immediately took the child from her. Her only contact with the baby from then on was a monthly photograph, sent by the Patriots. They later injected Sunny with life-monitoring nanomachines designed to end her life should a listed operative fail or die during their mission. The Patriots used this to force Olga to assist Raiden during the Big Shell Incident. If Raiden died during the incident, then Sunny would have been killed by her nanomachines. Olga eventually gave her life to protect Raiden, and the child whom she never got to raise. After Raiden accomplished his mission, Solid Snake decided to rescue Sunny himself, telling Raiden to stay put and that keeping himself alive would ensure the child's safety.[2]

Sunny was later rescued by Raiden. After escaping, Raiden covertly left Sunny in the care of Solid Snake and Otacon, who raised her aboard the Nomad. Having been used by the Patriots as a computer programmer, she became a child prodigy, helping to build both Metal Gear Mk. II and the worm cluster FOXALIVE, later used to shut down the Patriots' AIs. She enjoyed cooking eggs for Snake and Otacon; which she used as a kind of fortune telling, calling it her "Sunny Side Up" fortune telling. If the eggs turned out well, the group's current mission would be a success. Unfortunately, she wasn't actually very good at making eggs, and they burned more often than not.

Sunny had been in hiding most of her life, having little to no social skills and no experience of the outside world beyond computers. Somewhat fittingly, Otacon acted as a surrogate father, and she inherited some of his mannerisms. She had a very pronounced stutter that slowly faded away after befriending Naomi Hunter. She was also very protective of Raiden and Snake, often chastising the latter for his smoking habit. During the Twin Suns mission, after Raiden recovered enough to return to battle, Sunny requested that, if Raiden finds Naomi, he tell her that "I cooked them right." After the AIs were shut down, Otacon discovered that she managed to program FOXALIVE to shut down the AIs, yet at the same time keep regulation of the societal essentials intact, although he was ultimately unsure of what Sunny's motives were for choosing that specific method.[3]

After the Patriots were destroyed, Sunny found her first "outside" friend, a local boy, at the wedding of Meryl Silverburgh and Johnny Sasaki. The boy didn't speak English, but she had fun playing with him anyway, and gave him the Metal Gear Mk. III as a present. In the end, Sunny decided to accompany Otacon in witnessing the final days of Solid Snake.

At some point after 2014, Otacon officially became Sunny's legal guardian and so Sunny adopted his surname of Emmerich.[4] In a conversation between Raiden and Courtney, Sunny had attended school but because of the Patriots, she was too far ahead of her peers and only stayed for a year. Thanks to Otacon's connections, Sunny began working for a company called Solis Space & Aeronautics, rather than going for a tertiary degree in computer science.

Sunny reunited with Raiden in 2018, where the latter briefly introduced her to Blade Wolf. He requested her help in getting him to Shabhazabad air base at Pakistan, in order to stop the Colorado senator and 2020 Presidential candidate Steven Armstrong, whom at the time was believed along with World Marshal to be planning to instigate an assassination on President Hamilton. She aided Raiden by allowing him to use a Mach 23 RLV so he and Blade Wolf could infiltrate the country and stop the president from landing there. While glad to see him, she nonetheless informed him that he had to pay for restructuring and repair costs towards Solis's front gate (he'd mistakenly forced it open, destroying the electronic lock mechanism). Sunny later asked him if she could have Blade Wolf, with Raiden not objecting to it since Wolf seemed to like her a lot more than him, much to her delight.

After both Raiden and Sunny realized that Armstrong was somehow strong enough to send Raiden flying with only his human body, she almost regretted helping Raiden, realizing that she may have inadvertently placed Raiden in mortal danger, although Raiden promised that he'll come back alive. In the aftermath of the battle, Sunny mentioned to George that even though some would forever remember him as "Jack the Ripper", the Raiden she knew was a hero. She also gained custody of Blade Wolf. At some point, Sunny learned from Blade Wolf what occurred in his past immediately prior to encountering Raiden.

Early on, Sunny was shy and spoke with a stutter. Having previously been held hostage by the Patriots, she hadn't made friends with anyone outside of Philanthropy and computers; in fact, computers were the closest to what she could call a family, although she did desire to find out about what her mother was like. However, throughout the mission, she started to overcome her shyness after meeting Naomi. She also may have had a very low self esteem, as she would become hurt at some comments made towards her, even if they weren't necessarily meant to be insulting or critical. This was especially evident when she tried to serve eggs to Otacon and an unconscious Snake after the events of the failed assassination mission in the Middle East. After Snake regained consciousness and noticed her eggs, he remarked, "I don't remember the sun being so flat," to which Sunny became visibly hurt. However, by 2018, Sunny was a lot more positive. Raiden remarked to Boris that she was "a lot more sunnier than she used to be" in her early life. She even teased Raiden when commenting how she was surprised that the Mach 23 aircraft worked well.

Sunny had a great amount of care and loyalty for Snake and Raiden, especially since the latter had saved her from the Patriots. This was evident by her scolding Snake for smoking on the Nomad, and during the briefing before the Eastern European mission, even taking away and disposing of the last cigarette before Snake could get the chance to smoke it. She also prevented Snake from taking Raiden with him to Shadow Moses Island as he was still recovering from his injuries, and even cradled Raiden in her arms when he collapsed while talking to Snake.

Sunny would usually sing while she cooked her eggs, prior to Snake's mission briefings aboard the Nomad. In the Middle East briefing she sang digits from Pi, and in the South America briefing, she sang the numbers of the Fibonacci Sequence. Prior to the briefing on Eastern Europe, she sang elements from the periodic table (albeit mispronouncing the element Erbium as "Ebrium"), and for Shadow Moses, she sang the names of stations along the Nose Japanese private railway.[note 1] During the mission aboard Outer Haven, Sunny cooked eggs around the time of Snake's passage through the microwave hallway, jumping up and down when they turned out well.

Besides programming, Sunny was also skilled at developing machines, having assisted in the design of the Metal Gear Mk. II for Solid Snake's use.

Sunny later created a Mach 23 speed aircraft later used by Raiden. When she started working at Solis, Sunny's vision of the future of space travel helped her garner leadership qualities that made her an important player in the designing of prototype aircraft. However, she also held Otacon's views that science would end up being used for war, when she saw Armstrong piloting Metal Gear EXCELSUS.

Character artwork released for Metal Gear Solid 4, early in the game's development, portrayed Sunny as an infant, being held by the newly-made Cyborg Ninja Raiden.

During one of the mission briefing cutscenes, Sunny can be found playing a PlayStation Portable for a brief period of time while cooking eggs. She can also be seen with a PlayStation 3 in another mission briefing. During normal gameplay, if the player uses their iPod to listen to "Oishii Two-Han SeiKatsu," Sunny can be seen dancing on the Nomad video feed on the pause menu.

Examination of Sunny's back pocket while she is wearing the apron, will show it to contain a pack of cigarettes.

In the pre-briefing for the game, the song she sang involved unlock codes.

The secret weapon Solar Gun has its description as a monologue from Sunny, herself describing a dream where she was enveloped in an ominous darkness looking upon a hopeless world, before being saved with kind and hopeful words from a mysterious boy wielding the power of the sun itself.

For a limited time, a camera called the Sunny Camera was sold in the Drebin section of Metal Gear Solid 4's website.[7]

A tweet from Quinton Flynn regarding Metal Gear Rising: Revengeance had him mentioning working with Christina Puccelli, implying that Sunny would reappear in the game in some capacity. A promotional brochure for Metal Gear Rising that was handed out at its showing at the 2012 Tokyo Game Show confirmed that she was going to appear in the game, although she was kept in silhouette. According to the December 2012 issue of Weekly Famitsu, Sunny would act as a "secret character."[8] She was eventually unveiled in the February 2013 issue of Famitsu, with the official Metal Gear Rising website's character page being updated to reflect the change. Her left pants leg has the Philanthropy logo on it, and she wore the same outfit as her mother did during the Tanker Incident. She also has a flower pin in her hair, similar to the one Naomi gave her. A closer examination of Sunny's render, specifically her ID card, reveals her full name as "Sunny Emmerich." In a Codec conversation with Courtney, Raiden confirmed that she gained the last name of Emmerich when Otacon became her legal guardian between the events of Metal Gear Solid 4 and Metal Gear Rising.

Although Metal Gear Solid 2 implied in its script for the Tanker Chapter and the game itself that Sunny was born in 2008, Metal Gear Rising listed Sunny's age as 11 years old in her Codec information.

Other than the main story of Metal Gear Rising, Sunny also made an appearance in the ending of the LQ-84i DLC.

Sunny also appeared in Versus Battle, where she fought against Rose. 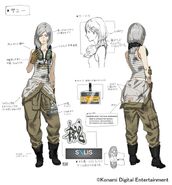 Sunny's silhouette icon on the official Metal Gear Rising website, prior to February 2013.

Sunny working at a computer terminal.