Lt. Solid Snake was a renowned member of the military group FOXHOUND. He was instrumental in taking down both Outer Heaven and another enemy base three years afterwards.

Snake was dispatched to Outer Heaven to investigate and eventually take out its ultimate weapon, Metal Gear. After parachuting in with three other companions and hiding in a truck, he was able to get access to the Outer Heaven fortress. Sneaking around the base, Snake eventually managed to locate and destroy the supercomputer responsible for controlling the weapon. He eventually discovered that his commanding officer, Big Boss, had been responsible for Outer Heaven and the Metal Gear, and had been intending for Snake to bring out false information to the West. Snake managed to defeat his former commanding officer, and left him for dead. Because of his actions, he was promoted to Lieutenant.

Three years later, FOXHOUND learned that an enemy base was developing new weapons, thanks to intel supplied by a spy planted there. Suspecting that the weapon may be a new Metal Gear, Lt. Solid Snake was briefed on the situation before being dispatched to the enemy territory. Snake led a three-man group that included FOXHOUND explosives expert Nick Myer and former Navy intelligence officer John Turner. In addition, they also had the aid of a helicopter pilot, as he knew the route to the base.

Upon arrival, Snake, Myer, and Turner split up. After evading flares, searchlights, and gyrocopter patrols, Snake and Turner rendezvoused outside the main entrance, and carry out their plan of having Turner act as a decoy for the enemy guards and let himself get captured in order to allow Snake inside, as it was too heavily guarded to directly penetrate, and the back door was locked. Afterwards, Snake proceeded to carry over his investigation, also learning that John was relocated from one of the POWs. He eventually confirmed after interrogating an enemy officer that the weapons were ready and being prepared to be transported on a cargo ship. He managed to reach the exit after dealing with a five-man mercenary group near the exit and bypassed the barrier to the port area. As he arrived at the ship, Myer called in informing Snake that Turner was being held on board the ship.

Snake then infiltrated the enemy ship transporting them, with it setting sail just as Snake boarded. He eventually rescued a POW and learned that Turner was relocated again, although he nonetheless learned that there was something important in the holds, which Snake deduced were the Metal Gear shipments. He eventually found an enemy officer who, after interrogating him, revealed that the Metal Gear shipments had no weaknesses to exploit, and suggested blowing up the ammunitions cache in the holds area to sink the ship. The helicopter pilot then called in and informed him that he was en route to Snake's location. Snake then located a Grenadier unit and took them out to get the card key needed to access the holds. After locating the ammunitions room, he then blew up its ammunition room in order to sink it. He used a tracer to locate the helicopter, eventually reaching the heliport before the ship sunk and boarded it after the helicopter blew up a part of a wall to aid in Snake's escape. Afterwards, he learned from his support group's helicopter pilot that contact had been lost with the FOXHOUND operatives, and that the nation also built an entirely new Metal Gear model: Metal Gear 2, and suggested that he contact their inside agent, Jennifer, for more information.

With this new development, he was then transported to the main enemy encampment. After rescuing a POW, he was informed by Myer via the POW to not trust Turner. Snake was later called by Turner, informing him that he was on the train, and had activated his tracer. While traversing the train, Snake narrowly evaded various traps that Turner misinformed him about. After finding Turner and rescuing him, Snake learned that he wasn't the real Turner, but an impostor. Snake then managed to kill the imposoer just as the train was headed to a stop, also retrieving the Powered Armor from him. Myer then called Snake and, after apologizing for being tardied about the call, informed him that the operation was a "go." While traversing through the remaining parts of the premises, Snake managed to retrieve some landmines, and got a call from Jennifer regarding information she picked up at the main base. At the immediate premises of the base, Snake was pinned down by an enemy tank, and used landmines to take it down. After infiltrating, he managed to interrogate an enemy officer and learned that Metal Gear 2 was seven times more powerful than the original Metal Gear, and also retrieved an antenna to alleviate a jamming issue with his transceiver.

Upon arriving at the main building of the base, Snake was informed by Jennifer that Myer was coming in ahead of Snake and that he should follow his lead. He then interrogated several officers, where they revealed that the enemy's commander had the key to the secret weapon, and that the enemy's commander was allegedly invulnerable. He also learned from Jennifer that the commander plans on using Metal Gear 2 to launch nukes across the world and that the commander was on the top floor of the base. He managed to locate a bugging kit, and also overheard in a room that the commander's weak spot was the soles of his feet. However, upon reaching the inner sanctum of the base, he got a call from Myer, apologizing for his recklessness before being cut. Snake then managed to find a mortally wounded Myer, who informed him that Jennifer's cover was blown and that the leader of the enemy nation was in fact former FOXHOUND commander Big Boss, the mastermind behind Outer Heaven who was believed to have died in the aftermath of the mission. He also learned that Big Boss was equipped with a life support system and that in order to defeat him, Snake had to lure him out of the command room before Myer succumbed to his injuries. Snake later managed to find a smoke bomb.

Eventually, Snake managed to enter Big Boss's command room, where Big Boss explained that after Metal Gear 1 and Outer Heaven was destroyed, he suffered extensive injuries that resulted in him becoming a cyborg, and he wanted revenge. Snake fought his former commanding officer, but after seemingly defeating him, Big Boss transformed into a giant robotic version of himself. Placing mines at Big Boss's feet after luring him out based on comments made by the guards and Myer's final words, Snake killed Big Boss once and for all.

However, an announcement was made revealing that Metal Gear 2 was activated. Snake then escaped the command room and saved Jennifer, with her telling him to use the door in the area behind the main building to reach Metal Gear 2. Snake then, upon arriving, marked the door with the smoke bomb he found earlier, and had the chopper use its weapons to destroy the reinforced door. Upon entering, another announcement was made, declaring Metal Gear 2's first targets are New York, Tokyo, and Moscow. Snake eventually managed to reach Metal Gear 2's holding area and used the R/C Missiles to take it out of commission.

As a result of Snake's actions, the United Nations declared World Peace Day.

This incarnation of Solid Snake is the playable character of both the Metal Gear and Snake's Revenge games that were released for the Nintendo Entertainment System, as well as the main character of the 1988 gamebook sequel released shortly after the Famicom version of the former. According to the English instruction manual of Metal Gear, Snake originated as a U.S. Marine who partook in the Grenada Invasion, and was recruited into FOXHOUND as a result. In addition, the manual also claims that Outer Heaven's leader is Colonel Vermon CaTaffy.[1]

Unlike most other incarnations of the character, including his canon counterpart, this Snake remains a member of FOXHOUND and is promoted to Lieutenant sometime after the events of Operation Intrude N313. Snake's in-game appearance in Snake's Revenge resembles that of Austrian bodybuilder and actor Arnold Schwarzenegger. According to the back of the game's packaging, Snake also spent his time pursuing the supposed antagonist of the previous game, Colonel CaTaffy, out of vengeance for the deaths of his two comrades, shortly after succeeding in his mission.[2] The English manual further claims that Snake is a black belt in 32 forms of oriental combat, is skilled in every weapon known to man, and is a combination of Rambo, James Bond, John Wayne and Lawrence of Arabia. However, in the 1988 gamebook, it does mention that he was temporarily in retirement until being reinstated two years after the events of the game, with it also being mentioned that during this time, he was a failed illustration artist.

This version of Snake appears in Scholastic's Worlds of Power novelization of Metal Gear, which was based on the localized NES version. In the book, Snake is given the real name of Justin Halley, and is the leader of the Snake Men, a U.S. Marines antiterrorist squad operating under "Fox Hound Command." Since the novel was aimed at younger readers, Snake doesn't kill anyone, only using his guns to pistol whip guards, and refuses to procure cigarettes he finds on the base, believing them to be a trap, before stating that "they're deadly enough on their own." 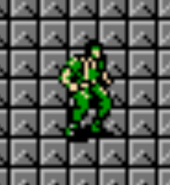 Snake's portrait in the Snake's Revenge manual. It was mistakenly placed above J.T.'s bio. 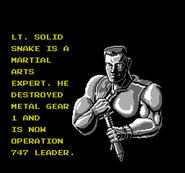 Snake's in-game bio and portrait, before starting the game. 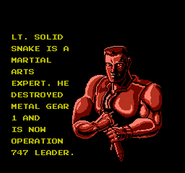 Snake's in-game bio and portrait, after pressing the start button. 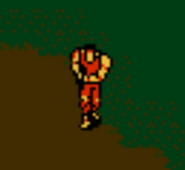 Snake's sprite in Snake's Revenge.
Add a photo to this gallery

Retrieved from "https://metalgear.fandom.com/wiki/Solid_Snake_(Operation_747)?oldid=276029"
Community content is available under CC-BY-SA unless otherwise noted.