Solid Snake was a legendary mercenary, and former member of the U.S. Special Forces Unit FOXHOUND. Before joining FOXHOUND, he was a Green Beret, at which time he became close friends with Colonel Roy Campbell.[1]

In 2016, Snake was called out of retirement, by CIA member Roger McCoy, after an airplane carrying U.S. Senator Viggo Hach was hijacked by terrorists. The hijacking was carried out under the orders of No. 16, a psychic test subject who wanted revenge, and informed the U.S. Government that if they wanted the plane unharmed, they would have to hand over "Pythagoras." Snake was sent to infiltrate the Lobito Physics and Chemistry Lab on Lobito Island after a couple of FBI Hostage Rescue Teams were eliminated.

Soon after entering the facility, he was contacted by a lab tech by the name of Gary Murray, who had escaped from the terrorists and knew the location of Dr. William Flemming, the scientist who had created Pythagoras. Snake met up with Gary and was told to go to the residential area, where Flemming was supposedly located. After sidetracking to the armory, Snake entered the residential area and was given access under the name of Hans Davis, much to the surprise of Snake, who had never used the name before. However, this ended up being a trap set by the terrorist leader, Leone, who had been waiting there. After shooting "Flemming", he turned his weapon on Snake, who was narrowly rescued by Teliko Friedman, the only surviving member of the HRT.

After speaking with Snake's support team, Teliko joined him in his mission and gave him information on the real Flemming's location. The two headed to BRC-024 where they were contacted by Gary, who told them that he intended to get to Flemming first, to acquire the Pythagoras data, and then kill him. This prompted Snake and Teliko to quickly move through the building to get to Flemming before Gary did.

When Snake finally reached Flemming's supposed location, he instead found Gary, who revealed that he was actually Dr. Flemming and that Snake was Hans Davis, his partner and one of the creators of Pythagoras. Flemming explained a few things while Snake began to recall strange memories that fit with what Flemming was telling him, causing him to doubt himself.

Fortunately for Snake, Teliko came to his aid once more, shooting at Flemming and making him drop the Pythagoras data. Later, Snake and Teliko decided to ally themselves with Leone in order to stop Flemming, though they were forced to kill the mercenary leader after he became subjected to the drug ACUA.

Towards the conclusion of the incident, Alice was revealed to be No. 16, who was capable of using ACUA to control people's thoughts. It was she who caused Snake to come under suspicion, by implanting the memories of Hans Davis into his mind. After Snake and Teliko successfully destroyed Metal Gear KODOQUE, the memories of all the people Alice had controlled came back to her simultaneously, causing a shock which led to her immediate death.

Lucy, a SaintLogic test subject, would later claim that Solid Snake died on Lobito Island, with his cells being used to create a clone soldier.

Snake was highly trained in close quarters combat and was skilled in the use of most types of weapons.

Snake did not keep himself emotionally distant from other people and would joke around when he needed to. He could also be a little bit sarcastic when he wanted to. Snake had a tendency to trust people upon first meeting them, which caused him to be betrayed by at least two people over the course of his mission to Lobito Island. He would also attempt to comfort those who were close to death.

Snake didn't believe in the supernatural, as demonstrated by his behavior towards his young psychic radio contact, Alice Hazel, by describing her as a fortune teller (much to Roger McCoy's disgust), and his skepticism of her warnings about future events.

Solid Snake is the protagonist of Metal Gear Acid and is an alternate version of the canonical Solid Snake. This "Snake" seems to have led a similar life to the original, such as his past military exploits as a special forces operative and mercenary, for which he gained legendary status. Whether he actually fought in Outer Heaven and Zanzibar Land is never revealed. However, it is implied that this Snake previously encountered the threat of Metal Gear, which is described in-game as once being "the strict property of the United States, but due to a leakage of military secrets, other countries were equipped with enough technical capability to build their own."

His artwork photo shows him wielding an XM8 with Raiden in the background and Naked Snake in the foreground, both wearing their implemented masks prior to the start of their respective missions.

In Metal Gear Acid 2, the main protagonist is revealed to be a clone of the Solid Snake from the previous game. It is mentioned that the original Snake's body was recovered from Lobito Island, despite being shown alive and well following the incident there, and thus, the circumstances of his death remain unexplained.

Unlike his canonical counterpart, Snake does not appear to suffer from the same rate of accelerated aging, if at all, since Metal Gear Acid takes place two years farther in the future than Metal Gear Solid 4: Guns of the Patriots. In addition, the fact that his clone appears in Metal Gear Acid 2 contradicts more recent information, in which modifications to the canonical Snake's DNA prevented the copying of his chromosomes.

This Snake's in-game render depicts him only slightly differently than the canonical Solid Snake. He dons a Sneaking Suit nearly exactly like the one the canonical Snake wore in the first Metal Gear Solid, However, his hair is a much lighter shade of brown, and he does not wear his hair in the iconic mullet style of his canonical counter part, sporting a rounder hairstyle and facial hair (cutscenes and art depict him with a mullet closer to the canonical Snake's). He does however, don a bandana similar to the MGS1 Snake and his facial and body build is generally the same. 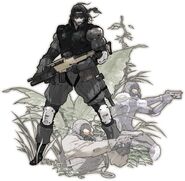 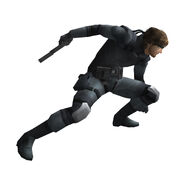 Concept art (Link Battle Color B).
Add a photo to this gallery