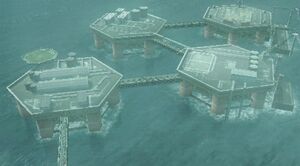 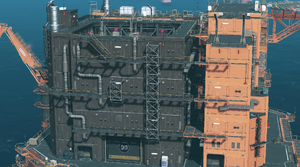 R&D Team was a division of both the Militaires Sans Frontières and the Diamond Dogs. As indicated by their name, the division was responsible for the research and development of weapons and items used by Snake (as well as Venom Snake) and the Combat Unit. Members included Engineers, Mechanics, and Researchers. A similar unit, known as the Tech Unit, existed in what would later become FOXHOUND during the San Hieronymo Incident, containing eight members during this time. It was formed alongside the Medical Unit by Roy Campbell shortly after discovering the existence of the ICBMG at the Harbor.[1]

They were among the first divisions for both military groups. Under at least the MSF team, the R&D Team, aside from weapons and equipment development, was also involved in the development of Mother Base itself, namely plant expansion and upgrading the design for Mother Base to be a honeycomb design, which also required recruits and GMP expenditures to complete.[2][3] Post-renovation, the unit as stationed at the R&D Lab. In addition, in regards to at least the Diamond Dogs team, they were also extremely thorough in their researching of various weapons, taking apart and analyzing the components recovered from the battlefield and then putting them back together in such a way that it was as if it was never dismantled to begin with, as Miller relayed to Ocelot shortly after recovering the CIA weapon "Honey Bee" where they analyzed the weapon before giving it back to the CIA and thus technically keeping their word about having it be "intact."[4] Huey Emmerich also developed some weapons and equipment for Diamond Dogs, albeit unofficially due to his status as persona non grata for his suspected role in MSF's destruction, including D-Walker and Battle Gear. After he was exiled due to his various crimes, including confirmation on his role in MSF's destruction, came to light, his research notes were left behind, with the R&D Team putting them to use to ensure they can develop his various materials without needing Huey at all.[5] The Diamond Dogs' R&D Team no longer had the function of base expansion, as that ended up being relegated to the Base Development Unit.

During the Diamond Dogs' mission into Africa, around the time Venom Snake was about to assassinate an executive for the Contract Forces of Africa stationed at Nova Braga Airport, the R&D Team and their platform ended up attacked by an unknown private force led by a former disgruntled member of MSF, also taking a number of hostages among the R&D Team,[6] thus forcing Snake to return to Mother Base to quell the threat. This event ultimately convinced Miller to create Forward Operating Bases as a further security measure against another direct attack on Mother Base. During that time, several members of the R&D Team were held hostage.

Sometime after the game's release, Konami updated the game to have "online" weapons development. These weapons' research and development would progress, even when the game is offline. However, they take a significant amount of time to progress, some taking as long as twelve days. In addition, these "online" developments consume much more resources and GMP than offline and only four can be under development at a time. This can be sped up using MB coins, causing some players to criticize this feature.

Aerial view of the DD platform during a storm.