Praying Mantis was a private military company that operated under the mother company Outer Heaven, run by Liquid Ocelot. It was based in Britain, and utilized the SOP system, using nanomachines to enhance and regulate their senses. Their business activities included soldiers for hire, supply and logistics services, education and training for state armies, and everything expected from a PMC. The name was based on FOXHOUND member Psycho Mantis.

At some point during the Iraq War, the Praying Mantis PMC contracted with the U.S. Government to send large amounts of its soldiers into combat zones. In 2014, Praying Mantis was deployed in the Middle East to fight off the local militia soldiers, the reasons for the local regime hiring them was partially due to their aforementioned experience in the Iraq war.[1] Numerous members were eventually killed and/or went catatonic after Liquid Ocelot tried to hijack the SOP System with Liquid's DNA.

Praying Mantis soldiers were well known for their appearance. They wore khaki flight suits and tactical armor. They were also seen wearing black fleece SPEAR-style jackets under their Land-CIRAS armor vests and balaclavas as well as headsets. Troops could be identified in their role depending on the headgear they wore; ones wearing the black ballistic helmet also had Bolle X800 goggles and were seen to be regular troops while the troops wearing baseball caps also opted for specialized roles such as snipers, spotters and radiomen. The troops usually wore Peltor COMM-TAC II Headsets.

Their primary weapon was the Mk.17 and their basic sidearm was the GSR. Several of them could also be seen using the M14 EBR as their sniper rifles (or DMRs (Designated Marksman Rifles) in a sense) against the Middle Eastern militiamen with great precision and effect. Some of them could be seen with the M870 Custom, they use the "master key" variant in standalone configuration. In rare cases, they also used the FGM-148 Javelin. Vehicles used include the Humvee armed with an M2HB .50 caliber heavy machine gun and the Stryker APC (Armored Personnel Carrier). Praying Mantis had deployed Gekko extensively against the militiamen, and had been known to use smoke grenades as a means of escaping disadvantageous situations; as evidenced when the Middle Eastern militiamen arrived in a BMP-3 Infantry Fighting Vehicle. Regarding the Gekko, when they were deployed against enemies, the Praying Mantis soldiers usually call a retreat beforehand to ensure they didn't get caught in the crossfire.

"I spy with my little eye. A thing that goes bump into the night near by. A sense of duty where the risks run high. The scum who wishes that he didn't try. Wakey, wakey. Praying Mantis: Unmanned Surveilance Systems"
―Narrator of Praying Mantis ad

Praying Mantis, alongside the other major PMCs during the events of 2014, utilized various advertisements for their company. One form was via promotional posters, which were given an overall monochrome color with the Praying Mantis logo and slogan on the front.

Another form was a TV advertisement. Owing to the PMC itself being of British origin, the narrator of the ad was given a East London accent, as well as using British colloquialisms such as "Wakey, wakey!" (a British expression for "wake up.") The advertisement depicted a figure clad in black riding a motorcycle while being pursued through the streets by a giant mecha resembling a Praying Mantis before being cornered underneath a tunnel by the mantis mech and desperately shooting at it before being impaled by one of its arms, causing copious amounts of blood to seep out of the figure's corpse. The narrator briefly references the motto for Praying Mantis in his narration, as well as used the colloquialism "thing that goes bump into the night" (a colloquialism for spooks and monsters).

Praying Mantis' equipment and tactics, as well as their TV ad and their previous involvement in the War of Iraq, suggests that the group specializes in urban warfare and desert warfare. The TV ad also notes that they use unmanned surveillance systems. The person narrating the ad speaks with an East London accent, and also briefly utters the motto for Praying Mantis during the narration.

From the map presented in Act 1 Briefing, its headquarters appears to be located in the heart of England, apparently in Sheffield or Nottingham.

Before Metal Gear Solid 4: Guns of the Patriots's release, the Praying Mantis soldiers in earlier versions of the game carried the M4 Custom equipped with a vertical handle grip, scope and laser sight. Soon, they were shown using the M4 carbines without the customization and this was later changed to the Mk.17 during the later stages of development. However, in-game, Drebin mentions to Old Snake that the M4 Custom is a popular weapon in use by the more powerful PMCs over the world (also referencing back to the earlier modes of Metal Gear Solid 4 where photos of Praying Mantis troops with M4s exist). Their equipment could be almost completely imitated by soldiers in Metal Gear Online before its final shutdown.

Praying Mantis is the only PMC in Outer Heaven to not have its field commander (Screaming Mantis) directly commanding it in the act it appears in, as she only appears to observe her fellow BB Corps' slaughter of various militias. As such, it is also the only PMC where the PMC itself and its commander are fought in two separate acts (Act 1 and Act 5, respectively). 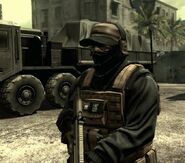 Praying Mantis soldier on guard at the PMC camp at Millennium Park.

Praying Mantis soldiers calling a tactical retreat from Ground Zero shortly before the Gekko arrive to wipe out the Middle Eastern militia soldiers (trailer only).