Plastic explosives (or the obsolete term plastique) are specialized forms of explosive material. It is soft and hand malleable and may have the added benefit of being usable over a wider temperature range than pure explosive. The first plastic explosive was Gelignite, invented by Alfred Nobel in 1875. During and just after World War II, a number of new RDX-based explosives were developed, including Compositions C, C2, and eventually C3. Together with RDX these incorporate various plasticisers to decrease sensitivity and make the composition plastic. C3 was effective but proved to be too brittle in cold weather. In the 1960s, it was replaced by C4.

Semtex was also developed in the 1960s by Stanislav Brebera by mixing of RDX with PETN and then adding binders and stabilizers.

C3, also known as Composition 3, was a plastic explosive developed after World War II, and used during the Cold War. It could be molded into any shape, and ran off a timer.

During Operation Snake Eater, EVA stole C3 from the fortress of Groznyj Grad, Tselinoyarsk, when she posed as an undercover KGB operative and captive/lover of Colonel Volgin. Naked Snake later used the stolen C3 to rig four fuel tanks within the Shagohod hangar, causing an explosion that heavily damaged the hangar, though the Shagohod itself emerged unscathed, due to the fuel having been removed beforehand. While setting up the final C3 explosive, he also molded a heart-shaped C3 into a butterfly, played self-catch with it, and then finally caught it before saying "Got you this time!", referring to an earlier event where he attempted to catch a butterfly at Tikhogornyj, but missed due to his recently damaged eye. EVA also used C3 to rig the rail bridge linking Groznyj Grad's main base/airfield and the path between Lazorevo and Groznyj Grad to deter any pursuit, although she and Snake later used it as an elaborate trap against Volgin's Shagohod after their initial plan of blowing up the hangar and the Shagohod failed, to which it was detonated by Snake using a long range weapon. The C3 used for the rail bridge were modified by EVA with detonators that activate when disturbed, in order to prevent anyone from disarming the C3 should it be discovered, as C3 normally is chemically stable and thus does not detonate upon disturbances, thus explaining why Snake detonated it with a long range weapon.[1]

C3 was later upgraded into C4 plastic explosives, primarily due to some flaws with the design (such as becoming brittle and useless in cold temperatures).

C4, also known as Composition 4, is a very powerful plastic explosive that is set off by a trigger. C4 is chemically and mechanically stable so it will not detonate when shot at, incinerated or consumed. In addition, it also has between 1.3 and 1.4 times the explosive power of TNT.

At somepoint between 1964 and 1974, Big Boss began regularly using C4 as an explosive. Also, C4, due to its high chemical stability, was used by American troops in Vietnam as fuel by setting it on fire.

During the Peace Walker Incident in 1974, the Militaires Sans Frontières procured C4 design specs shortly after rescuing the FSLN child soldier Chico. Shortly thereafter, MSF subcommander Kazuhira Miller, proposed that the group's R&D team develop C4 with a M112 demolition charge, in order to destroy a road barrier preventing access to an alternate route into Los Cantos, Costa Rica. The MSF later utilized C4 explosives to destroy a weakened wall blocking a shortcut between Selva de la Leche and Selva de la Muerte while Big Boss was locating the entrance to the AI lab in case they had to backtrack, as well as in various missions relating to demolishing or stealing enemy supplies. The C4 also came equipped with a timer, in case they were to do a countdown.[2] MSF later used C4 explosives to sabotage three anti-aircraft turrets to ensure the arrival of a MAGTF force on the Naval Prison Facility in Cuba on January 9, 1975, as part of a job by the Joint Chiefs of Staff. Mother Base's struts were later rigged with C4 by an advance team from XOF in preparation for their attack on MSF, resulting in catastrophic damage during the XOF's Trojan horse operation against MSF on March 16 of that year, including the sinking of at least one strut.

C4 was used by Solid Snake during the Outer Heaven Uprising in 1995 in order to destroy weakened walls, and later to sabotage TX-55 Metal Gear. The M5A1 variant of C4 was also used by Snake during the Zanzibar Land Disturbance for similar purposes. The M5A1 variant also had two settings: one that would be detonated via remote control, and one that would detonate after a certain amount of time passed.

During the Shadow Moses Incident in 2005, Snake used C4 explosives to destroy the cemented-over doorways in the armory of the nuclear weapons disposal facility. The entrances had been cemented over by terrorists occupying the facility, in order to conceal the location of their hostage, ArmsTech President Kenneth Baker, though they had not had enough time to paint them. After locating him, Snake discovered that Baker had been tied to a support pillar, trip-wired with C4. The C4 cache ended up detonated when the Cyborg Ninja attacked both Ocelot and Snake, with the mysterious individual also saving Baker from being caught in the explosion. Snake later made use of the C4 again to blow up the ice on the door to Tower A from the outside, when being pursued by Liquid Snake's Hind D. The C4 that Snake procured and utilized also came with a wireless detonator, which was also equipped with a scrambler so it won't be affected in any way from any other radio source.

During the Big Shell Incident in 2009, Raiden and Solid Snake were forced to dispose of Fatman's C4 bombs, which also contained a lot of wax (explaining their large quantity) planted within the Big Shell facility, by freezing their detonators with a special coolant spray. Smaller blocks of C4 were also stored within the Strut F warehouse. The C4 that were intended to do damage to the various struts and destroy Big Shell also ran with a timer upon the decoy C4 being deactivated, as well as have its detonation countdown accelerate if someone steps within a seven foot radius of the C4 via a microwave proximity trigger. A much larger C4 block, approximately the size of a briefcase, was also activated by Fatman shortly before his death upon being defeated by Raiden, and had stowed it under himself. The bomb, referred to as "the biggest bomb in the entire place" by Fatman, had enough explosive power to destroy the entirety of the Big Shell in one blast. In addition, upon activation, the C4's timer will not stop even if the detonator is destroyed. The C4 that Raiden procured and utilized also came with a wireless detonator, and was also equipped with a scrambler and an encryption device, in order to eliminate the risk of the C4 accidentally being detonated by a frequency other than that of the wireless detonator once set, such as jamming devices.

C4 was used by Rat Patrol Team 01 in 2014 to booby trap the Advent Palace in the Middle East. C4 was also sold by the weapons launderer Drebin 893.

Semtex is a very powerful explosive device, similar to C4. It was developed in Czechoslovakia. Because of its similarities, it was nicknamed the "Terrorist's C4" during the Cold War. The explosive is made with mainly RDX and PETN, in addition with numerous binders and stabilizers. Its detonation velocity was over 26,000 feet per second, and the explosion itself can reach over 3000 degrees fahrenheit. It was speculated that Semtex was the explosive used in the Pan Am 103 bombing over Lockerbie in 1988.[3]

Both the Gurlukovich Mercenaries and Sons of Liberty used Semtex linked to infra-red sensors, which would detonate if the beam was tripped. The sensors were monitored by control boxes, typically located near the explosive itself.

During the Tanker Incident in 2007, Solid Snake was forced to destroy several IR sensor control boxes in order to bypass the Semtex planted in the engine room of the USS Discovery. Snake estimated that, had the Semtex IR sensors triggered detonation at the same time, the amount placed on the ship would have been enough to sink the ship within two seconds.[4] Semtex had also been planted on the Discovery's key structural points by the Gurlukovich Mercenaries, which was later detonated by Revolver Ocelot to sink it.

In 2009, the Sons of Liberty placed numerous IR sensors and Semtex on the Shell 1-2 connecting bridge to deter intruders from attempting to cross, based on a tip from Gurlukovich Mercenaries leader Olga Gurlukovich regarding a man in a cardboard box being located around that area. In addition, having anticipated the possibility of intruders using the coolant spray to disarm the Semtex, the Sons of Liberty also placed them on the other side of the strut. Raiden, however, was able to disable the trap by successfully managing to shoot out all the sensors, including one mounted aboard a mobile Cypher UAV.

Plastic explosives have been a staple of the Metal Gear series since its inception. Often times the player is forced to use these explosives to clear a path to their objective. In the Solid series starting with Metal Gear Solid 4, they can be shot at with a gun, despite it being stable enough to not detonate when shot at or set on fire (which ironically was referenced in a briefing file in Peace Walker). In the original MSX2 releases, it was known as the P.Bomb.

to set. After setting, press

at any time to detonate. R&D can increase power."
―C4 Mother Base menu description in Metal Gear Solid: Peace Walker

In Metal Gear Solid 2, the player encounters IR-equipped Semtex at three points during the game. These are:

In Super Smash Bros. Brawl, Solid Snake can plant a C4 pack on the ground as his Down Special Move (Down B on the GameCube, Classic Controllers and the Wii Remote + Nunchuk combo, or Down 1+2 on the sideways Wii Remote). He can detonate it by using Down B again, or by waiting 30 seconds. It can be placed on floors, walls or enemies.

Approximately one of the 6 C4 packs Solid Snake uses will be a C3 butterfly explosive (a reference to when Naked Snake molded C3 into the shape of a butterfly during Snake Eater). The explosive power is unchanged, however.

Fatman's ultimate C4: the "biggest bomb in the entire place." 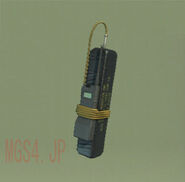 C4 from Metal Gear Solid 4: Guns of the Patriots.

The rail bridge C3 that EVA set up during Operation Snake Eater.

Some C3 molded by EVA into a heart.