Pieuvre Armement (English: Octopus Armaments) was a private military company that operated under the mother company Outer Heaven run by Liquid Ocelot. It was based in France, and utilized the SOP system, using nanomachines to enhance and regulate their senses. The name was based on FOXHOUND member Decoy Octopus.

By 2014, Pieuvre Armement employed an armed force the size of Canada and Mexico's populations combined, and manufactured 51.5 million firearms per year.[1]

In 2014, Pieuvre Armement was deployed in South America to fight a local guerrilla group. The South American state army fought alongside Pieuvre Armement, setting up ambushes for the rebel forces. At a village in Cove Valley, Pieuvre Armement captured several rebel soldiers and prepared to execute them.[2] Because of the low oxygen at the high-altitudes they were operating at exceeding the limits of their nanomachines, the PMC soldiers also engaged in unusually aggressive behavior, requiring Snake to be extra vigilant about their presence.[3] PMC soldiers later evacuated Naomi Hunter from the research lab in which she was being held, after Haven Troopers entered to confront Solid Snake.

Pieuvre Armement forces later suffered seizures after the SOP system was shut down by Liquid Ocelot. The nanomachines that controlled their behavior became unstable, damaging the frontal lobe of the soldiers' brains, and impairing their speech and emotions. Incapable of feeling pain, the affected soldiers engaged in destructive behavior, acting in a zombie-like fashion,[4] with their brain damage rendering them useless to their employers. [5]

Their primary weapons were the Mk.17, the M14 EBR, XM320 grenade launchers (a stand-alone configuration with a telescopic stock) and, in some cases, the MP7. Their basic sidearm was the GSR. Pieuvre Armement soldiers who guarded the Vista Mansion and power station in South America used the M60E4 and M2HB machine guns, while wearing slightly different attire.[7] They also utilized custom versions of the M870 Shotgun.

Pieuvre Armement, alongside the other major PMCs during the events of 2014, utilized various advertisements for their company. One form was via billboards, which were given red edges with the Pieuvre Armement logo and slogan on the front.

Another form was a TV advertisement. Owing to the PMC itself being of French origin, the narrator of the ad spoke completely in French. The advertisement depicted several females who are seen using a speargun at the beginning as well as being grasped somewhat erotically by an octopus with a skull-shaped face before being released upon the octopus releasing ink (metaphorically representing death), while the narrator throughout gave a philosophical narration inferring that the entire point of life is to die, or at the very least play dead.

The logo for Pieuvre Armement featured to the left a stylized Skull that had some masses on it, plus numbered tentacles coming out of the skull and the skull-octopus being positioned near an Octopus Pot. Nearing the left "eye" of the skull is the words "Pieuvre Armement" written in cursive.

During their operations in South America, the Pieuvre Armement possessed several Lockheed C-130 Hercules transport aircraft for transporting troops. In addition, at least some of them wore Protec helmets.[8]

Pieuvre Armement is one of the five subsidiary PMCs of Outer Heaven featured in Metal Gear Solid 4: Guns of the Patriots. Its assistance to the South American state army, coupled with the fact that Laughing Octopus ambushes several rebels, would imply that the PMC is a guerilla warfare-based one. From the map presented in the Act 1 Briefing, its headquarters appears to be located in the heart of continental France, apparently in Limoges or Poitiers.

Compared with the other Outer Heaven PMC forces in Metal Gear Solid 4, Pieuvre Armement troops are seen to be the most lightly armored, as they seem to wear lighter vests and some are equipped with no knee pads. Helmets are not used either, possibly in order to reduce the overall weight soldiers must carry in the unforgiving climate of South America. Pieuvre Armement's equipment could be imitated by soldiers in Metal Gear Online.

Pieuvre Armement's TV spot featured a female using a spear gun, although it is not known if the troops themselves actually used it. Similarly, the TV spot also showed some underwater mines in the background near the octopus. At the very end of the ad, the Roman numerals "MMXVIII" (2018) appear, as well as some small illegible letters. The TV spot was also shown at Konami France during the game's development. 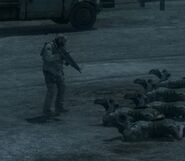