Olga Gurlukovich (Russian: Ольга Гурлукович) was the daughter of Sergei Gurlukovich, and a member of his private army, the Gurlukovich Mercenaries. She took command of her father's unit after his death. She was then forced into joining the Patriots, after they kidnapped her daughter Sunny. She worked as their agent, playing an important role in the Big Shell Incident of 2009.

"I grew up on the battlefield. Conflict and victory were my parents."
―Olga Gurlukovich

Sometime during Olga's childhood, she was raised within her father's military unit.[3] At some point during her life, she received a long scar across her face.[4]

Olga led her father's mercenaries when they captured the transport ship Discovery in his attempt to seize Metal Gear RAY in 2007. Sergei's intention at the time was to use RAY as a super weapon with which to re-establish Russia as a major world power. She boarded the ship with the help of Revolver Ocelot. However, she did not trust Ocelot, even with the knowledge that he was the only one of the unit who had undergone the appropriate VR training for piloting RAY.

After the ship was secured, Sergei ordered Olga off the ship out of concern for her unborn child, but she refused, stating that she belonged there with the unit. Sergei reminded her that she was carrying his grandchild but she still refused to leave and waved away the helicopter that had been sent to pick her up. Caught off guard, she was then ambushed by Solid Snake, though he was hesitant to shoot due to her resemblance to Meryl Silverburgh and his curiosity as to her identity.[5] She tossed her gun overboard at Snake's command, and was ordered to do the same with her survival knife. However, when the storm stopped briefly, she decided to attack Snake by firing a round from the Spetsnaz NRS-2 Special Scout Knife, which he successfully dodged, before taking cover.

Undeterred by Snake's skills, Olga's loyalty to her comrades and family pushed her to battle the interloper, using her (formerly concealed) USP handgun and frag grenades. However, she was ultimately rendered unconscious by Snake's tranquilizer pistol, before having her own gun stolen by Snake. Her opponent then expressed surprise at her possession of an American gun.[6]

Olga, still incapacitated, was later rescued by Snake when the Semtex on board the Discovery was detonated by Ocelot, critically damaging the ship. However, Olga later blamed Snake for murdering her father and sinking the tanker, desiring revenge against him. She also bore a grudge against Ocelot, believing he had abandoned Sergei, not realizing his true role in her father's death.

Afterwards, Olga took command of her father's forces and became a renegade, joining a branch of the Russian Mafia, which was in reality controlled by the Patriots. When she was about to go into labor, she went to a hospital, although she didn't realize until afterwards that the hospital was actually run by the Patriots. After she gave birth, her child was taken hostage and used as a means by which to force Olga into serving the Patriots.

Olga and her Gurlukovich Mercenaries joined the Sons of Liberty, who captured the Big Shell, and held U.S. President James Johnson hostage. Olga encountered Raiden in person after she supplied a debriefing via radio to Solidus Snake, who had just returned from shooting down a SEAL helicopter with a Harrier, informing Solidus of witnessing a Cyborg Ninja and witnessing someone hiding in a cardboard box near the Shell 2 connection bridge, resulting in a beefing up of security and setting a trap on the connection bridge, respectively. Raiden then held her up and inquired her of whether she was a member of Dead Cell, to which she denied. She then escaped capture by jumping off a railing Arabian-style and disappearing. Raiden would inform Iroquois Pliskin of this development, with the latter explaining who Olga was.

In actuality, Olga was working against her own men as an agent of the Patriots, albeit reluctantly. Her mission was to ensure the success of Raiden, a test subject of the S3 Plan. To do so she used two different methods to disguise herself so as to accomplish her mission: she disguised herself as the Cyborg Ninja and identified herself as Mr. X during Codec calls to Raiden. Just as Gray Fox had assisted Solid Snake during the Shadow Moses Incident, Olga utilized a powered exoskeleton to assume the role of the Ninja, though her body lacked the permanent cybernetic attachments that would have technically made her a cyborg. Olga had originally identified herself as "Deepthroat," until Raiden asked if she was Fox.

Around the same time that Raiden was trying to help Emma Emmerich cross over to Strut B, Olga encountered and fought against Solid Snake. However, she later relented on her desires of avenging her father after she learned the truth from Snake about how her father was killed, as well as his involvement in getting her off the doomed tanker. They later decided to team up to help stop Arsenal Gear. However, in order to do that, Snake and Olga, in her Cyborg Ninja disguise, had to feign betrayal to Raiden and "capture and deliver" him to the Sons of Liberty in order to lessen security on board Arsenal Gear.

After Raiden was detained aboard Arsenal Gear, Olga revealed herself to him, explaining their roles as pawns in the Patriots' S3 Plan, and expressing doubt as to whether he could handle the truth (referring to Rosemary).[7] Olga then left to free Raiden's electronic restraints remotely, after which he eventually met with Solid Snake to retrieve his gear. Olga also provided Raiden with her high frequency blade, through Snake, which she had used as the Ninja. Raiden, with the help of Snake, escaped and was confronted by Solidus.

At this point, Olga revealed her true identity to all, including Solidus, determined to help Raiden, since his death would mean the murder of her child by the Patriots. Furious by Olga's double cross, which she herself despised, as most of the unit that she was forced by the Patriots to kill just to keep Raiden and ultimately, her child alive were not only friends, but family members as well, Solidus easily overpowered Olga with his powered suit's tentacles and readied his FN P90. Knowing that her end was imminent, Olga pleaded with Raiden that he must live for her child's sake before Solidus killed her with a shot to the head.

Olga's daughter Sunny was eventually rescued from the Patriots by Raiden and placed in the care of Solid Snake and Hal Emmerich. Sunny possessed a photograph of her mother in her home on board the Nomad, fixed on the wall behind the stove. In addition, after the Patriots' AI network was shut down by FOXALIVE, Otacon speculated that a possible reason Sunny chose the method of shutting down the AI network was as her way of avenging Olga.[8]

Olga, despite being female, dressed in a more masculine fashion, and overall had a more masculine build, to the extent that Snake referred to her as a tomboy shortly after she was defeated. In addition, she didn't shave her armpits, and she possessed a long, thin scar across her face. She also bore an uncanny resemblance to Meryl, with Johnny Sasaki, Otacon, and even Snake briefly noting this.

Olga was driven to fight on the battlefield, having experienced it from a young age, and would remark that "conflict and victory" were her parents. She was very loyal to her unit, whom she considered family, wishing to stay and fight during the Tanker Incident despite her father ordering her to leave. However, her love for her child and willingness to protect it, resulted in her betraying her comrades during the Big Shell Incident, and ultimately her own death, due to the Patriots' machinations.

Olga initially felt vengeful towards Solid Snake during the Big Shell Incident, believing him responsible for her father's death, until she learned the truth after confronting him.

Olga often wore a telnyashka, a horizontally striped undershirt, which is a type of dress uniform worn by Russian naval and airborne troops.

During the Soviet invasion of Afghanistan, Olga's father took her there while he fought the Mujahideen. During the war, she learned a wide range of military and survival skills.[9]

Olga Gurlukovich (オルガ・ゴルルコビッチ, Oruga Gorurukobitchi?) is a character who appears in Metal Gear Solid 2: Sons of Liberty (MGS2). She and Meryl Silverburgh share the same Japanese voice actress, Kyoko Terase, and their visual similarity is commented on by both Solid Snake and Johnny Sasaki in the game, (the latter can be overheard with the Directional Microphone, when the player is supposed to be listening in on Ocelot and Solidus's conversation). In Metal Gear Solid 2: Substance, Meryl's 3D character model is, aside from hair, clothing and facial scarring, identical to Olga's, and her vocal grunts in Snake Tales are also the same. Initial concept designs depicted her as looking very similar to Meryl in terms of being a redhead, only having straight hair similar to Para-Medic rather than wavy hair, and was also shown wearing an officer's uniform that featured the Cyrillic initials for the Soviet Union (C.C.C.P.). Although this was nixed, the initial design was ultimately reused for the character Olga Sergeyevna Kalinia in the game Left Alive.[10]

During the battle with Olga, the player has to utilize the M9 to defeat her, making her the only boss in the game where a non-lethal kill is required. In reality, given her pregnant status during the events of the Tanker Chapter, the tranquilizers would have had adverse effects on her developing child.

Defeating Olga in the HD Edition will unlock the "Light's Out" achievement/trophy, a figure of speech referring to knocking someone out, as well as referring to the fact that a spotlight can be destroyed to defeat her, on difficulty settings below Extreme. In addition, befriending Olga in the same version will unlock the "Sharing Is Caring" achievement/trophy.

Following Snake's duel with Olga on the tanker:

When Olga first meets Raiden as the Ninja, she states that she is "neither enemy nor friend." This is first said by Gray Fox to Solid Snake in Metal Gear Solid, and later by Drebin to Snake in Metal Gear Solid 4: Guns of the Patriots. In the Japanese version, Olga speaks with the voice of Gray Fox when uttering this line. Similarly, when describing the PAN card's functions, she does so in Donald Anderson's voice.[11] These voice changes were not carried over to the English version.[12]

According to the MGS2 script, the reason why President Johnson grabbed Raiden's crotch upon first meeting him was because he mistook him for Olga, who he assumed had been sent by the Patriots to kill him.

Olga and EVA's clothing can be used as costumes in Rumble Roses XX.[13]

Olga is currently the only Cyborg Ninja whose outfit is not included as a DLC skin, for use by Raiden in Metal Gear Rising: Revengeance. Her regular attire, however, is visually referenced by Sunny's appearance in the game, who wears the same outfit that Olga wore during the Tanker Chapter.

Olga appeared in Versus Battle, competing for fan votes against EVA.

Concept art of Olga as the Ninja.

Olga as the Ninja.

Olga's 3D model in The Document of Metal Gear Solid 2. 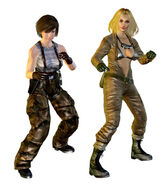 Olga and EVA's outfits in Rumble Roses XX.
Add a photo to this gallery