Metal Gear Solid Touch (メタルギアソリッド タッチ, Metaru Gia Soriddo Tacchi?) is a third-person shooter developed by Kojima Productions for the iPhone and iPod Touch. It was published by Konami and distributed through the App Store. Announced on December 16, 2008, Touch is based on Metal Gear Solid 4: Guns of the Patriots. It was released on the App Store for select regions on March 18, 2009. Ikuya Nakamura directed the game and Yasuyo Watanabe produced it, who was previously Kojima Productions' chief web designer. The game was removed from the App Store sometime in 2015, but is still available to re-download if it was previously purchased.

The game was announced on December 16, 2008, after a Konami flash site appeared in early December 2008 teasing the game with the words "A Next Metal Gear Is..." Upon the announcement of the game, Konami stated that Touch would be released for the iPhone OS, would be set in the Metal Gear Solid 4 universe, and would have eight stages, with more available after the game was released. Konami also released screenshots of the game at the same time, showing Old Snake firing at a Gekko.

The game's official website was updated info early 2009 with some more info regarding the game. It stated that the game would be a rail-shooter, where players touch the enemies, resulting in Snake shooting at them. The site also stated that Touch would retell the story of Metal Gear Solid 4, with all the stages based on locations in Metal Gear Solid 4.

In early March 2009, Konami stated that the game would be released on the App Store on March 19 for US$9.99. Also in that month, Kojima was interviewed by Japanese gaming magazine Famitsu, where he said that upon release, the game would only feature 12 stages and that "after awhile, Konami would distribute a full version of the game" that contained 20 stages in total and "those who purchased the initial 12 stage version [would] be able to upgrade to the full version for free." Kojima also explained that he attached Watanabe to the project because of her experience with the iPhone.

Touch is largely a retelling of Metal Gear Solid 4's storyline, where the stages take place during the five acts of Metal Gear Solid 4. Between stages, the story is briefly explained. Players play as Old Snake through 20 stages, where they control his targeting cursor with their finger tapping on enemies, such as PMCs and Gekkos, to shoot at them. When not firing, Snake hides behind a protective wall that can be destroyed if it takes too much damage. Players can zoom in on enemies by "pinching" the screen.

When enemies appear, they fire after a second or two, giving the player time to kill them without taking damage. Allies will occasionally appear during some stages, such as Raiden. If the player shoots them, Snake will take a small amount of damage.

There are also boss battles, where Snake fights the members of the Beauty and the Beast Unit, and must kill them as normal by tapping on them to shoot at them. Snake can regain health by shooting at GA-KOs that appear throughout the game.

At the end of each stage, the player is awarded a rank based on their performance. Higher ranks award more Drebin Points, which can be used to buy rewards such as wallpapers for the iPhone.

The game received largely mixed reviews. IGN gave the game a 6.0/10, stating that the game is "shallow" and "a real disappointment for both hardcore and casual fans" of the Metal Gear series. 1UP gave the game a C+, stating that Touch "is nowhere near a 'real' Metal Gear Solid game" though it "can satisfy the Metal Gear fan who is also an extremely casual, portable gamer." Eurogamer gave it a 6/10, saying that the game "just doesn't have the mechanical depth to give it replay value as a score-attack game" and "a microscopic burst of Snake action that's over almost before you've started to notice that it's good." 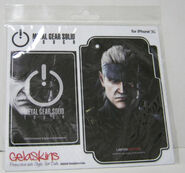