Two vocal songs were included on the soundtrack. The opening theme, "Love Theme", is sung by Jackie Presti and composed by Nobuko Toda. The ending theme, "Here's To You" was written by Ennio Morricone, arranged by Harry Gregson-Williams and sung by Lisbeth Scott.

Three different versions of this soundtrack were released. The original Japanese version, a European standard release version which contains only 16 tracks under the catalogue number KDE-MGS4-OST and "Original Soundtrack" that came bundled with the Japanese, North American and European Limited Editions of the game. Also contains 16 tracks. 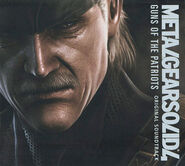 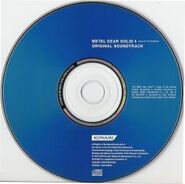 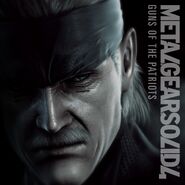 Retrieved from "https://metalgear.fandom.com/wiki/Metal_Gear_Solid_4:_Guns_of_the_Patriots_Original_Soundtrack?oldid=273458"
Community content is available under CC-BY-SA unless otherwise noted.