There are two versions of Subsistence, the basic edition and a limited edition version. The one difference is the inclusion of a third disk (Existence) in the limited edition version. Whilst this is the case for the Japanese and North American versions, the European and Australasian versions has no limited edition. Instead, to make up for the long delay, they contain all three disks. They also feature the signature of Hideo Kojima printed on the bottom right corner of the cover.

Disc 1, called Subsistence, includes the full version of Metal Gear Solid 3 along with new features. The new features include an optional 3rd person camera mode (an experimental version of the camera eventually used for Metal Gear Solid 4), an improved Demo Theater mode (used for viewing in-game cutscenes) and a linkup mode for Metal Gear Acid 2 that uses the PlayStation Portable's Solid Eye peripheral to view pictures taken in Metal Gear Solid 3. In addition, the player can also download various bonus camouflage uniforms to the memory card without the need to go online, and camouflage uniforms/facepaints that were originally the result of buying certain Japanese items early, as well as the Flecktarn uniform, can now be unlocked normally by beating the game once, or in the case of the DPM uniform and Green face paint, finish all the Special Boss Duel in first place on the Persistence disc. Special facepaints reflecting the flags of the Soviet Union, UK, France, Germany, Sweden, Italy, Spain, Japan, and the United States can also be unlocked by beating the main game once. Alternatively, all of the unlockable special camos can be unlocked automatically by starting a new file and selecting "I Like MGS3!"

Disc 2, called Persistence, included, primarily, Metal Gear Online (MGO) featuring sneaking missions, team deathmatch, deathmatch, capture missions and rescue missions. The official servers for the original Metal Gear Online were shutdown in 2007. Also included is a Duel Mode, where the player can take on all the bosses and major enemy encounters (such as the Ocelot Unit, and bike pursuers) as they are in-game, or with a special stipulation such as limited ammo. Beating this mode with all first place finishes will unlock the DPM and the Green facepaint in the main game. Also, the Ape Escape minigame Snake vs. Monkey was moved here from Disc 1, with two new levels Return of the Living Apes (using the Groznyj Grad main Weapons Lab hangar) and The Apes of Wrath (using Rokovoj Bereg). Also included is a Secret Theater mode (the videos for which were shown on the official Konami website), and playable versions of the original Metal Gear and, for the first time outside of Japan, Metal Gear 2: Solid Snake.

For this disc, called Existence, Kojima and crew created a three and a half hour cut of Metal Gear Solid 3's cinematics featuring remastered sound. Although presented like a film, it has been stated that the story was not meant as "Metal Gear Solid 3: The Movie", but more a way for those who wanted to know the Metal Gear Solid 3 storyline but were unable to finish the game. Also included on the disc was the first E3 trailer for Metal Gear Solid 4.

Metal Gear Solid 3: Subsistence received very positive reviews. Metacritic gave Subsistence a metascore of 94 based on 53 reviews.[1] GameRankings gave the game an average of 93.17% based on 65 reviews.[2] 1UP gave Subsistence an A+ saying, "As with all Metal Gear Solid rereleases to date, Subsistence has enough new content to warrant a repurchase (especially at the lower price) by those who have already played the premiere version."[3] IGN gave the game a 9.8 saying "With Metal Gear Solid 3: Subsistence, Kojima has not only provided the "director's cut" of one the top games of 2004, but also given series fans a myriad of extra features... while simultaneously creating one of the best PlayStation 2 games ever made."[4]

Besides Snake vs. Monkey, Reiko Hinomoto and her alter-ego, Rowdy Reiko, from the wrestling series Rumble Roses, were also secret characters in the online mode for Subsistence. According to Hideo Kojima, he had initially planned for a Metal Gear/Rumble Roses crossover game earlier with Rumble Roses producer Akari Uchida. However, when he was scheduled to meet with them for the planned crossover, the Metal Gear development staff refused because they were unwilling to work with the series. Kojima eventually decided to bring up the offer again when deciding that he needed to create secret characters for the online mode, which they accepted. Prior to that, he had initially considered working with Tomonobu Itagaki, the creator and, at the time, producer of the Tecmo fighting game series Dead or Alive, for the secret characters.[5] 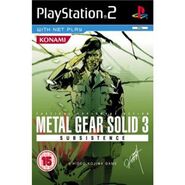 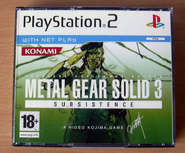 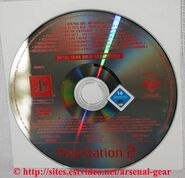 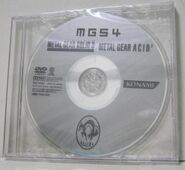 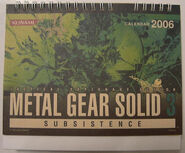