Metal Gear Solid: Snake Eater 3D is a stealth action game for the Nintendo 3DS. It is a re-release of Metal Gear Solid 3: Snake Eater. The game was released on February, 21, 2012 in North America and on March 8, 2012 in Japan and Europe. It is also the first Metal Gear game to be released on a Nintendo-developed portable system since Metal Gear: Ghost Babel, back in 2000. A digital download version was released in Japan via the Nintendo eShop function on the Nintendo 3DS on December 16, 2014, exactly a decade after the initial release of the original title. The download includes a Snake Eater theme, which included a FOX logo wallpaper, the theme song for the game, cursor sound effects from the Metal Gear series, and folders modeled after the cardboard boxes from the series. Both the digital download for the game itself as well as the 3DS theme were later released in both Europe and North America on December 18, with the game itself costing $19.99. A patch was released a day later to fix a glitch occurring in the WIG area that freezes the game and corrupts save data when using the Circle Pad Pro.[7]

This game was officially announced at Nintendo's E3 press conference on June 15, 2010. There was a technical demo shown at E3 2010 titled Metal Gear Solid: Snake Eater 3D - The Naked Sample.

On June 3, 2011, Konami held a press conference at which the trailer was released. The developers stated that Metal Gear Solid 3: Snake Eater was "the most best" game in the series to use the stereoscopic 3D due to its jungle setting. The trailer showed that the 3DS' gyroscope would be used to balance when walking across a bridge. The camouflage system has been updated, allowing players to make use of the 3DS' camera to make a custom camouflage pattern. The new camouflage has been dubbed PhotoCamo.[8]

At E3 2011, gameplay videos revealed a part of the game's control scheme. The player uses the circle pad to move Snake, the face buttons control the camera, and the shoulder buttons handle aiming and shooting. Creative producer Yoshikazu Matsuhana revealed that the game would have some gameplay features from Metal Gear Solid: Peace Walker, such as the crouch walking and the over the shoulder aiming. According to him, they did this because they wanted to get that audience they got from Peace Walker and bring it over to the 3DS game, without making them feel uncomfortable playing it. This way, both old and new fans could enjoy the game.

Konami confirmed that the game would use the Nintendo 3DS Expansion Slide Pad. The game's camera would be controlled by the second analog stick, and weapon commands such as equipping firearms and first person view could be used by pressing the shoulder buttons.

A limited edition Premium Package is available for this game. It contains the game itself along with a limited edition Snake Skin 3DS handheld console and 2 double sided art cards featuring new artwork of Naked Snake, The Boss, EVA and the Cobra Unit. The Premium Package is only available in Japan. It was released on March 8, 2012 for 22,980 yen on Konami's online store, Konami Style.

During the 2011 Tokyo Game Show, four uchiwa fans were issued that represented Metal Gear Solid 3D: Snake Eater. The fans each had a picture of one of the characters on it: Naked Snake, The Boss, EVA and Ocelot.[10]

On November 28, 2011, a downloadable trial version was downloadable prior to the Japanese release of Snake Eater 3D. In it, the player could enjoy getting to Nikolai Stepanovich Sokolov before rescuing him in Dremuchij.[11]

Metal Gear Solid: Snake Eater 3D was well received by critics. GameRankings gave a 80.75% based on 20 reviews. Metacritic reported a metascore of 78.[13] IGN gave it a 8.5 saying, "Renamed Metal Gear Solid: Snake Eater 3D, this 3DS game in many ways improves upon its source material. That it takes advantage of the portable's abilities is commendable, though it still suffers from some problems both familiar and new."[14] GameSpot gave it a 8.0 saying, "It's very much the same game, but the updated controls and visuals make this remake on the 3DS the best version of the game to date."[15] Game Informer gave it a 7.50 saying, "The fact that Snake Eater's story stands well on its own was probably the main reason why Kojima Productions decided to bring it to the 3DS, but gamers who want to play Snake Eater are better off leaving this 3D incarnation on the shelf in favor of another version."[16] GameTrailers was the most critical of the game, giving it a 6.8 saying, "Aside from the original PS2 release, this is easily the worst iteration of Snake Eater. The lack of extras, the frustrating controls, and the overall performance issues hold it back from being one of the premier third-party games for the 3DS."[17]

In honor of the 10th anniversary of the release of Metal Gear Solid 3: Snake Eater, Konami Digital Entertainment, Inc., via the Nintendo 3DS, with the system's recent theme shop, released a theme based on Metal Gear Solid: Snake Eater 3D. It's background original music was the opening moments for "Snake Eater", while the sound effects were the item drop sound effect. The background wallpaper used the cover image for the game, alongside a blackened snake-skin print on the bottom screen with the FOX logo on the right side. In addition, all of the folders are colored brown and have the design of the cardboard box. It costs 200 yen in Japan, €1.49 / £1.39 for Europe, and $1.99 for North America, with them being released on December 16 for Japan and December 18 for both Europe and North America, respectively. 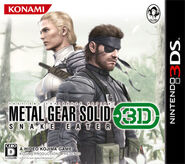 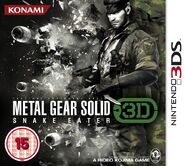 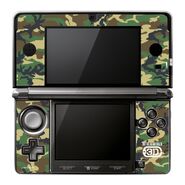 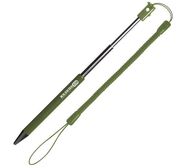 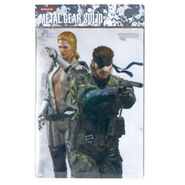 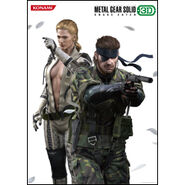 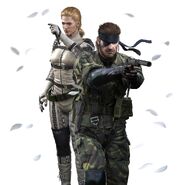 Redone version of the artwork used on the Japanese cover of Metal Gear Solid 3.

Promotional image of The Boss (Japanese).

Promotional image of The Boss (English).

Alternate logo for the game. 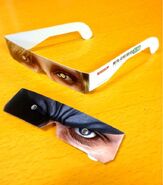 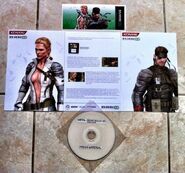 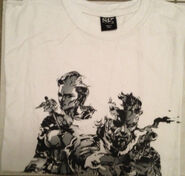 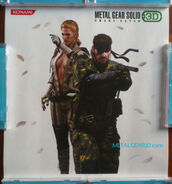 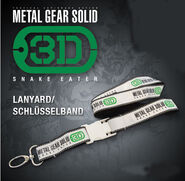 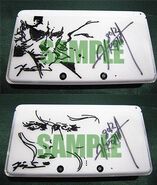 3DS drawn and signed by Hideo Kojima and Yoji Shinkawa given away in a competition on the game's Japanese launch. 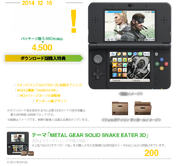 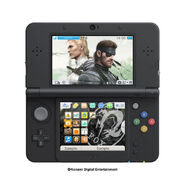 Promotional image of The Pain with text.

Promotional image of The Fear with text.

Promotional image of The Fury with text.

Promotional image of The Sorrow with text.

Promotional image of The End with text.

Promotional image of Ocelot with text.

Promotional image of Volgin with text.

Promotional image of EVA with text.

Promotional image of The Pain with text (Japanese).

Photo Camouflage feature, being used with the Kojima Productions logo.

Snake using the Tree Bark camo in the game.

Yoshi in a tree.