Metal Gear Solid: Piece Walker was a flash-based jigsaw puzzle game that was released on January 28, 2010. The site for the game had been up for a few weeks prior to its release although the game was unplayable. Players who completed the game would unlock Metal Gear Solid: Peace Walker PSP wallpapers and other images along with new concept art of Raiden for what was then known as Metal Gear Solid: Rising, as well as a passcode for unlocking an in-game T-shirt modeled after the Doritos brand.

Players could register an account with the site or play anonymously. Players could select a puzzle to play and would compete with another player to see who could accumulate the most points. Players earned one point for placing the correct piece in the correct spot. The game ended when all pieces had been placed. The player with the most points won the match and earned an extra 10 points as a reward. As players earned points, they would unlock rewards in the "Item Gallery." The rewards included PSP backgrounds and other things.

The game also included a ranking board where players could see the top players with the most points.

As players earned more points, they would reach different ranks. All of the ranks were animal names, similar to FOXHOUND ranks. 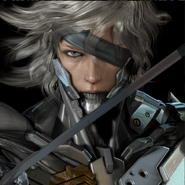 Updated concept art of Raiden for Rising.
Add a photo to this gallery
Retrieved from "https://metalgear.fandom.com/wiki/Metal_Gear_Solid:_Piece_Walker?oldid=267924"
Community content is available under CC-BY-SA unless otherwise noted.