Downloadable Content takes on many forms in Metal Gear Rising: Revengeance. The game launched with DLC bundled with pre-orders and different editions. There were also many other offers prior to the game's release that could give players different pre-order content. In Japan these give-aways were done through a number of outlets, such as Metal Gear Solid: Social Ops and Konami Style, while Amazon did so in other areas. All the DLC was included in the Japanese exclusive PlayStation 3 Special Edition that released on December 5, 2013.[1][2] Shortly after the announcement of the Japanese Special Edition the two story based DLCs were made free in the United States and all pre-order content was made available.[3] Other countries including Australia and the United Kingdom received the same changes, but only on Xbox 360. A Konami US representative on NeoGaf revealed through a series of posts that the offer was meant to be available exclusively in the United States, but an error lead to it being available worldwide on Xbox.[4][5][6] The PC version of the game, released January 9, 2014, included all DLC available outside of Japan.[7][8] The DLC preorder skins (exempting MGS4 Raiden) were later made available for the latest PlayStation update on the PlayStation Network on April 2014, with each of the skins save for the Cyborg Ninja skin costing $1.99 (the Cyborg Ninja skin costed $2.99).[9] Most of these were later rereleased in the PC version for the game as part of the game itself rather than true downloadable content.

Revengeance features a number of character skins that can be used by Raiden during the game's story mode and VR Missions. Five of these skins do not come with the standard version of the game, and instead must be acquired through other methods. Most of the DLC skins were tied to special editions and pre-orders but were later made available for purchase in North America, and exclusively on Xbox Live in other countries.

The Inferno Armor is a red version of Raiden's standard appearance that is supposed to emphasise the usage of explosives. It increases the amount of throwing weapons that can be carried.[10] It was only available with certain American pre-order versions before being released as paid DLC.

As the name suggests, the White Armor is a white version of Raiden's standard appearance. The armor allows the player to store up to 10 Repair Nanopastes/Electrolyte Packs and its color is derived from the white coat worn by doctors.[11] It was only available with certain American pre-order versions before being released as paid DLC.

The Commando Armor is a Green version of Raiden's standard appearance. The armor increases the number of ranged weapons that can be carried and its color is based on military fatigues.[12] The Commando armor, was not included among the pre-orders for the North American releases and as such was not available until the pre-order offers were released as paid DLC. The Commando armor was available with certain pre-order versions in The United Kingdom and Australia.

The Cyborg Ninja Armor is based on the appearance of Gray Fox in Metal Gear Solid. The armor comes with the powerful Fox Blade.[13] The character skin and Fox Blade were part of the North American limited edition and included as standard with all UK and Australian editions of the game. It was later made more widely available when the pre-order offers were released as paid DLC.

The MGS4 Raiden Custom Body is a character skin based on Raiden's cyborg body in Metal Gear Solid 4: Guns of the Patriots.[14] The skin was the only paid DLC available at the game's release. In Japan it was offered as a pre-order bonus.

The VR Mission pack was the first major DLC release. The pack consisted of thirty additional VR missions with new goals, including shooting galleries, side-scrolling beat-'em-up sections and more Dwarf Gekko gameplay sections. The Western release dates of the VR Mission DLC were later confirmed as March 12, 2013 in North America and March 13 in Europe and Australia.[15] The 1.2 patch to the PS3 version added DLC support and two completion percentage trophies related to the VR mission DLC. The North American version was initially exclusive to the PlayStation 3 and temporarily free until April 3. In the United Kingdom the download cost £1.99 on PSN or 240 Microsoft Points on Xbox Live, while in Australia it was $3.65 and $2.95 on PSN and Xbox Live respectively.

The Japanese version of the VR Missions came with a new variant of the HF Wooden Sword called the "Hebidamashii", or "Snake's Soul", which will play voice clips of Solid Snake in a variety of situations.

The Jetstream chapter was the second major DLC release. The first story based DLC focused on the circumstances behind Sam joining Desperado/World Marshal in 2016. The chapter featured three boss fights: the LQ-84i, Metal Gear RAY, and Steven Armstrong. There are also five additional VR missions made available via accessing VR terminals. Unlike the main game, the VR missions cannot be replayed at any given time, instead requiring that the player revisit the specific VR terminal to replay. Sam has his own health and FC upgrades, some of which can only be earned through placing at least third in these new VR missions.

Sam features a unique playstyle based on his status as a samurai rather than a ninja. He cannot perform the Ninja Kill move under any circumstances, but instead possesses a double-jump, dash move and strong attacks that can be held for unique effects. Instead of AR Vision mode, he performs a taunt to enrage enemies, making them drop their guard while also dealing more damage if they hit him. While Sam can perform the special Zandatsu "Execution" move, he does not share Raiden's special animations for these, instead simply switching straight to Blade Mode to cut them up. His only weapon is the HF Murasama Blade, and he has no Codec support team or customization options.

Enemies in the Jetstream DLC had substantially revised AI to make a harder gameplay experience; they are more aggressive, react faster, and have many of their animations altered or sped up to make them less vulnerable.

Like the previous DLC, the most of the Blade Wolf chapter's content is taken from the main game and repurposed to suit its new story, though there are a few new levels in the form of VR environments. Also like the previous DLC, during the final part of the DLC, the player can also access a VR terminal near the bridge where the LQ-84i ambushed Raiden in the main game and has to revisit it repeatedly to replay it. His move set is similar to Raiden's in that he has heavy and light attacks and can use Zandatsu. Blade Wolf's movement is different to the other playable characters due to his unique body shape and slower speed. Projectile knives can be used and, as with playing as Raiden, stealth kills can be performed. 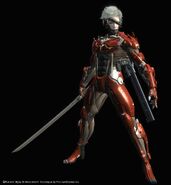 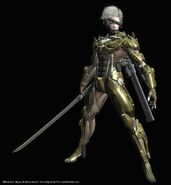 Cyborg Ninja Armor in the game.

The Cyborg Ninja Armor being modelled. 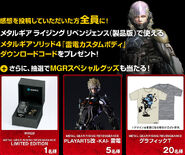 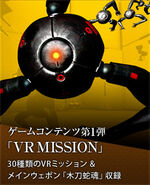 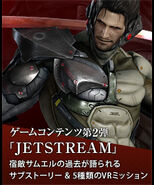 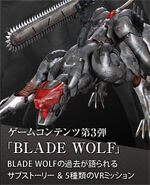