In early 2012, an alternate reality game (ARG) was released to promote Metal Gear Rising: Revengeance. The ARG was based around videos and distorted images that revealed characters, enemies and other information about the upcoming game. Updates and passwords that unlocked new content were also posted weekly on the official Metal Gear Solid and Metal Gear Rising Facebook pages, generally with hints as to where to locate them.

As early as March 24, 2012, a casting call requesting for live actors for a trailer relating to Metal Gear Rising was leaked onto the internet. It requested for actors relating to Raiden, Jack, Sam, and an unnamed doctor.[1]

On April 25, 2012, Konami released a new teaser related to Metal Gear Rising. The teaser, a distored collection of images showing what seems to be an interrogation mixed with various war imagery, ends with the date "4/30/12" and a link to the game's official page on the Metal Gear Solid website. The following day, another teaser image was uploaded, once again teasing the date "4/30/12." Game Informer and EGM were both sent replicas of Raiden's arm in the mail, which had a USB drive built in. The USB drive contained the Make It Right teaser as well as several images.

On April 30, the encryption process was initiated on the site at 1:00 PM. One of the "decrypted" items from the arm was a video, where Raiden is undergoing surgery, and then it flashes back to where he is tortured by several people, to which they hint at his becoming a Cyborg Ninja during the torture. In addition, one of the characters resembled and sounded like Solidus Snake, and the environment is implied to be in Africa, hinting that the flashback was to his child soldier days. It was later confirmed on the Metal Gear Solid Facebook page that Raiden's flashbacks were indeed to his training and upbringing under Solidus.[2] Another image on the site was a kid's drawing of Jack. In addition, computer coding presumably relating to the decryption process was shown on the screen, as well as a log on screen relating to a jtripper[3]:

In addition, the site also states that the user can accelerate decryption by sharing it with friends, and it has a command key at the bottom. In addition, in the background, there is a looping computer language in the background that presumably relates to the decryption from the arm.[4] Likewise, there were also blueprints of some of Raiden's organs, including his heart, kidneys/spleen, and spine on the right side of the site, and typing RAY in the command key will unlock blueprints of Metal Gear RAY. There is also a binary computer code on the site that reads:

...which translates to English as "I am lightning, the rain transformed."

On May 4, the Facebook page included a report of a new data cluster encryption being discovered that required a passcode. A file included on the Facebook page listed the passcodes as "Anatolian", "Alpine", "Bully Kutta", "Cane Corso", "Bordeaux", "Pyrenean", and "Neapolitan" before requesting that they go to 0001 (Anatolian). The Facebook page later reveals the passcode to be "Mastiff", which unveils a blueprint of the enemy from one of the earliest trailers.[5] Similarly, around 1:00 PM the same day, a new video was uploaded regarding Raiden's eye. It showed Raiden undergoing surgery where the characters are attempting to replace a damaged eye part, to which Raiden then flashes back to his days as a child soldier in Liberia when he was forced to watch various footage of war scenarios. The trailer ends with a mysterious person entering the operation area and being told that they can't be in there. Raiden asks who it is, then tells them to come closer before finally asking "Where is he?"

A video was uploaded by Konami on May 9 which was a hacked message of Colorado Senator Steven Armstrong, to one of his speech writers, on how to "reclaim the American dream" as well as calling themselves "the true Sons of Liberty." The "video" was later uploaded on the main Metal Gear Rising teaser site, under the name "Audio Data Access File #01000011." Likewise, before the upload counter reached 100%, a message came up stating "Acceleration overload, system cooldown initiated," resulting in the upload process being reset back to 0%.

On May 12, the Metal Gar Solid Facebook page updated its profile again. This time, it supplied a memo regarding a new file cluster retrieved from Raiden's left arm that is also password protected, and attempted to do a data retrieval before it got locked out due to data corruption.[7] The passcode was later revealed to be "Force XXI," the unit that Raiden served under during his adult years, which likewise unlocked corrupted blueprints of a Mastiff's head. Likewise, fliers were also placed around various schools, depicting a presidential campaign for Colorado Senator Steven Armstrong for the 2020 Presidential Elections, and graffiti on the election posters with the letter "n" replacing the letters "off" on "Keep War Off Our Shores," and the words "Warmonger" written in big letters on his picture. The poster also hints at the time setting of the game taking place around 2020.[8]

On May 14, a new, password-protected image was reported on the MGS Facebook page to be uploaded. The hint on the password was supplied as the elements Fluorine, Osmium, Xenon, Arsenic, Lutetium, Iodine, Vanadium, and Europium. The password is later revealed to be "FOXALIVE", and it unlocked corrupted blueprints for Bladewolf, the Crying Wolf-like robot seen accompanying Raiden in various teaser images early in development. The same Facebook entry also mentions that there was a system override at 3:02:07, and they managed to locate the password on 3:12:02.[9] On May 15, the Facebook page uploaded another picture onto the page and updated it to include a new hint at a password-encrypted file, stating that all "Maverick agents" locate Codec ID KA-119 on January 1: 2007. The passcode was "Big Shell," and the file was a corrupted blueprint of Metal Gear RAY, this time dealing with a cross-section of its mechanics.[10]

On May 1, the Facebook page updated its wall for a message to supply an "Urgant message from Maverick HQ" regarding the final video upload almost being completed, and reminding people to continue liking the site to ensure that it continues the download on schedule.[11]

Around 4:00 PM on May 17, the Metal Gear Rising website managed to produce the final trailer, "Sword." In it, the head surgeon informs Raiden that his upgrade is complete, and then the mystery person from before supplies Raiden with his sword. The scene then flashes back to Raiden's days in Liberia, where he bore witness to one of the soldiers interrogating another soldier for giving away their position, before threatening to kill him and his family, as well as implying that he'll rape his wife before killing her. Solidus then demands for Raiden to watch before turning on a radio for Raiden to listen to music. Solidus then tells Raiden a speech about how blades have honor and nobility, as one can feel someone's pulse with a knife whereas anyone could pull the trigger, before slitting the soldier's throat in front of Raiden. Raiden, present day, then looks down on his blade while his arm sparkles with electric plasma, before the scene shifts to the numbers "01000101 00110011." After translating from Binary into English, it reads "E3."

Shortly thereafter, Facebook updated its wall to inform all "Maverick" members that all video files have been decrypted on the site, and that the next transmission will be during Konami's E3 preview.[12]

All of the video files/trailers were done with live action actors. According to Konami in the 160th KP report, the live action scenes will not actually be used in the final game, but were intended to hint at what would happen during the game.

On May 23, the Metal Gear Solid Facebook page updated its wall to inform players to input the Konami Code ("Up, Up, Down, Down, Left, Right, Left, Right, B, A" minus the commas) on the command key on the Metal Gear Rising site to access a video file showcasing the title screen for the E3 demo.[13]

Although the footage itself was not shown in Rising, the events in the footage and the website were subtly referenced by Raiden in an optional Codec conversation with Doktor, regarding left arm data.

Promotional letter regarding Raiden and "Maverick."

Arm cutout from the site. 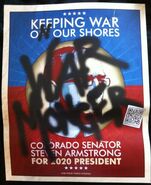 Rising teaser website with 4% decryption completed on the decryption bar.

Mysterious person at the ending of the second trailer.

Raiden being handed back his sword at the end of the "Sword" trailer.

New blueprint image preview on May 10.

New image preview on May 14.

Retrieved from "https://metalgear.fandom.com/wiki/Metal_Gear_Rising:_Revengeance/ARG?oldid=262566"
Community content is available under CC-BY-SA unless otherwise noted.