Metal Gear RAXA (pronounced rah-sha) was a prototype of the Intercontinental Ballistic Metal Gear intended for performance evaluation. This model of Metal Gear was developed by Nikolai Stepanovich Sokolov, based on Aleksandr Leonovitch Granin's designs.

RAXA was the first Metal Gear prototype ever built, having been developed by the U.S. Government in 1970. It was completed by Sokolov, based on blueprints created by Granin, and acted as a test model for the ICBMG. RAXA's head bore a strong resemblance to the original design, though it possessed only four legs, which was merely a step towards bipedalism. In addition, it utilized a sophisticated rocket propulsion system for hovering above the ground, and could make a swift landing, destroying everything in its path. The rocket propulsion system could also allow RAXA to move around in a limited manner if its legs ended up damaged. However, its rocket propulsion system was directly beneath its missile pods, meaning that any damage to the missile pods when opened would result in a significant amount of damage to its engines.

During the San Hieronymo Incident, Gene anticipated that Naked Snake (Big Boss) would discover the existence of the ICBMG and attempt to destroy it before its launch. He therefore planned for the ICBMG to be relocated, before Snake and his resistance forces stormed the assembly plant in which it was housed, and replace it with the RAXA prototype. Gene also planned to have Ursula pilot RAXA against Snake in order to buy enough time for the ICBMG to be relocated. To ensure the plan's success, he also kept the plan a secret from all but the ones directly involved in flying the ICBMG away.

Having been led to believe RAXA to be the complete (and only) model at the time, Snake intended to sabotage it before it could be activated and used to deploy nuclear strikes. Once he arrived, however, it instantly became active, being piloted by exiled Colonel Skowronski, who had snuck himself in with the intention of using it against Gene. Very soon after its activation, its incompleteness became quite apparent, and it suddenly shut itself down while firing its machine gun.

Ursula (at Gene's command) awakened from Elisa's subconscious, and commandeered RAXA using her psychokinetic powers, not only to compensate for its malfunctions, but to enhance its performance beyond normal standards, causing it to move unlike a machine at all. Colonel Skowronski was thrown from the cockpit and fell to his death. Snake was then forced to fight RAXA. Although the ICBMG had been designed for quadrupedal locomotion, the prototype RAXA did not do so while battling Snake, instead using its sophisticated hovering system. After disabling its four legs, RAXA was unable to effect takeoffs and landings, forcing it to crawl on its front after toppling over. With its top missile ports exposed, Snake managed to destroy RAXA by attacking its launch tubes when they opened up.

Afterwards, Gene, upon congratulating Snake for besting the mech, implied that it was not actually the ICBMG, with Ghost (revealing himself to be Sokolov) confirming as much to Snake that the Metal Gear that had been destroyed was actually the prototype. Snake, realizing he had fallen for Gene's duplicity, could only watch as the ICBMG itself was transported away from the facility.

Metal Gear RAXA (メタルギアラシャ, Metaru Gia Rasha?) appears in Metal Gear Solid: Portable Ops (MPO). Its existence was first hinted at in the "Show Maybe" pamphlet article "Gears of War" for E3 2006, which revealed that an all-new menace was to be unveiled in the game.

The name raxa (ラシャ, rasha?) is a Japanese loan word from Portuguese, which means "felt" (the type of cloth). It entered the Japanese language when Portuguese Jesuit priests introduced Christian ideas, Western science, technology and new products to the Japanese during the Muromachi period (15th and 16th centuries).[1] When rendered RAXA, the name is visually similar to REX, that of the mech's predecessor in the series, and with which it shares a physical likeness.

The scene in MPO where Ursula psychokinetically floats above RAXA's cockpit, just before the battle with Big Boss, is similar to artwork for Metal Gear Solid V: The Phantom Pain featuring Tretij Rebenok and Metal Gear Sahelanthropus.[2] 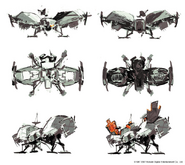 The designs for RAXA.