Metal Gear G, codenamed Gustav, was a small-scale, mass-produced, walking tank, designed to assist infantry in local combat areas, which would normally be inaccessible to conventional tanks. Due to its profile, Metal Gear G was nicknamed "Ostrich" during development.

Based on the design of Metal Gear D by Dr. Drago Pettrovich Madnar, Gustav was to undergo development within Zanzibar Land. The nuclear launch module was removed from the design to reduce its overall weight and increase its mobility. Whereas Metal Gear D was heavily armed, Gustav would function more as a "mobile control tower," processing all the battlefield data it received, then transmitting the analyzed information in real-time to all soldiers in the troop. It would also enable all soldiers to focus on a single target using its advanced sensors.

One was to be available for each infantry troop, each being piloted by either a communications officer, a data processing specialist or a commander. While its main purpose was to assist infantry, it was also equipped with weapons that rival the power of most MBT armored vehicles. Other weapons could also be mounted, depending on the situation. Had it been successfully deployed, it could have been a more economic alternative to conventional war machines.

Due to the events of Operation Intrude F014, the country of Zanzibar Land collapsed before the production of Metal Gear Gustav could be completed. Dr. Madnar mentioned Gustav's development to Solid Snake, saying that the country had been working on a light version of Metal Gear D for mass production. Had Zanzibar Land survived the events of the incident, there would have been around 144 Metal Gear Gs in total, as part of the country's Tactical Army's Special Task Force division.

Metal Gear G was originally going to appear in Metal Gear 2: Solid Snake within the tank hangar of the Zanzibar Building. However, it was cut due to time constraints, although Hideo Kojima and Monkey Oka implied in the linear notes commentary in the Metal Gear 2: Solid Snake Original Soundtrack that the real reason it was cut was because Shoulder Nishio had neglected to pay attention to the game's ROM size.[1] An early screenshot of Metal Gear 2 indicates that the Metal Gear Gs would have been in the production line at Zanzibar Building. They were replaced by tanks in the final version. This screenshot would later be made available publicly via the book Metal Gear Solid: The Complete Collection of Scenarios and Concepts.[2] There is no relation between the similarly named Metal Gear Gustav and Gustava Heffner, the latter only receiving her name in the re-released versions of Metal Gear 2.

Gustav shares some similarities with the Gekko from Metal Gear Solid 4: Guns of the Patriots, both being small, mass-produced bipedal weapons designed for infantry support. However, unlike Gustav, Gekko are unmanned and do not coordinate troops using battlefield data analysis (that role being much expanded in the form of the SOP System).

The concept was once again revived as Walker Gear in Metal Gear Solid V: The Phantom Pain. 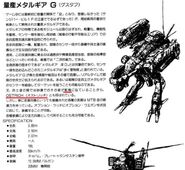 Gustav data in the MG2 manual.
Add a photo to this gallery

Retrieved from "https://metalgear.fandom.com/wiki/Metal_Gear_G_(Gustav)?oldid=268525"
Community content is available under CC-BY-SA unless otherwise noted.