Metal Gear for the Nintendo Entertainment System (Family Computer in Japan) is an altered port of the original MSX2 game. It was first released in Japan on December 22, 1987 (only five months after the MSX2 version), followed by a North American release in June 1988 and in PAL territories (Europe and Australia) sometime in 1989.

The NES version was developed by a separate team without Hideo Kojima's involvement and many changes to the game were made during the porting process, resulting in a severely different product. According to Masahiro Uedo, who worked on the NES version as a sub-programmer, there were two primary reasons for the changes: the first one was because of the higher ups at Konami ordered the developers to make the NES version different from the MSX2 version; and the second was hardware limitations (since the team was not given an advanced mapper chip, unlike the team who worked on the Famicom version of Contra, which had the VRC2 at their disposal) which led to the replacement of the Metal Gear fight with an immobile Supercomputer. The porting process was also subject to a three month deadline.[1]

Despite this, the NES version sold surprisingly well, especially in the Western market, with a million copies sold in North America. This, in turn, resulted in the creation of Snake's Revenge without Kojima's involvement, which in turn became the inspiration for Kojima's actual MSX2 sequel, Metal Gear 2: Solid Snake (which in turn, became the basis for Metal Gear Solid). As a result, the NES version of Metal Gear is credited for allowing the creation of the later games in the series be possible. Nonetheless, Kojima has expressed intense dislike for this version due to its changes without his involvement.

Similar to other NES games at the time (including the original Legend of Zelda), the game sometimes included a fold-up map that helped the player get through obstacles in the game.

Changes from the MSX2 version

The NES version of Metal Gear was released in North America at a time when video games were still lacking in-game storylines for the most part. As a result, when a Japanese game was localized in the U.S., the company that was marketing the game in the U.S. could write any sort of made-up storyline and details in the game's instruction manual without necessarily following the original Japanese storyline.

Konami of America was very notorious for this practice, often making up their own storylines for their games while paying little or no respect to the original designers' intentions (as evident in some of the Castlevania and Contra games).

Metal Gear was no exception; it went through the same questionable marketing treatment. However, unlike some of the other games of its time, Metal Gear actually provided the player with an in-game narrative (albeit very primitive compared to later titles) which develops the storyline as the player progresses through the game. The in-game translation (which was done by the actual developers) kept the storyline unchanged from the Japanese version.

In the packaging and manual for the NES version, the game's main villain (whose identity is intentionally kept secret in the original version) is named Colonel Vermon CaTaffy, "a once tranquil shepherd boy" who "turned to terrorism at an early age." CaTaffy's name is a play on the name of former Libyan leader Muammar al-Gaddafi. Snake's commanding officer (who is Big Boss in the original version) is named "Commander South," a play on the name of the Marine lieutenant colonel involved in the Iran-Contra scandal, Oliver North. Moreover, Snake is mentioned as being a former Marine who participated in the Grenada Invasion prior to joining FOXHOUND. This would be contradicted by the timeline presented in later games. The manual also gave names for some of the NPC characters (e.g. the soldiers who fall asleep while on guard duty, as "B.A. Dozer"), as well as describing the scorpions in the northern desert as being trained killer animals owned by Colonel CaTaffy. None of these terms and changes were featured in-game. In addition, Big Boss' role as Snake's CO is featured in the packaging and manual via a screenshot.

Finally, the packaging retained the TX-55 Metal Gear on the cover. The Japanese version's package artwork omitted the TX-55 altogether.

The European version is almost identical to the North American version, aside from the following changes:

Metal Gear was rated the 104th best game made on a Nintendo System in Nintendo Power's Top 200 Games list.[2]

In 1988, a novelization of Metal Gear was written by Alexander Frost and published by Scholastic Books, through their Worlds of Power series of video game adaptations. It was closely based on Konami of America's localization of the plot, rather than the original Japanese storyline. In addition, further liberties were taken with the story, such as giving Solid Snake the name "Justin Halley", and making him a member of a U.S. Marines antiterrorist squad known as the "Snake Men." Since the books were aimed at younger readers, Snake doesn't kill anyone and only uses his guns to pistol whip guards. The cover artwork was airbrushed to remove Snake's gun.

In Japan, a Metal Gear gamebook was published on March 31, 1988, shortly after the release of the Famicom version as part of the Konami Gamebook Series, set two years after the events of the original game.

Famicom packaging. Note the absence of the actual Metal Gear.

GameCube packaging. Released only in Japan with the Premium Package edition of Metal Gear Solid: The Twin Snakes.
Add a photo to this gallery 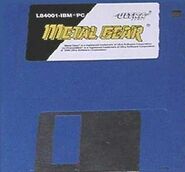 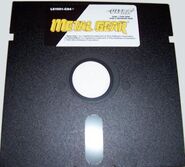 Commodore 64 version.
Add a photo to this gallery

Rear side of the brochure.

U.S. magazine ad showing the equipment within the game, including original designs for the Iron Glove, Bomb Blast Suit and Transceiver. Illustrated by Tom DuBois.

Metal Gear profile in 10 Ways to Stay Zap Happy pamphlet.
Add a photo to this gallery

Worlds of Power novelization by Scholastic (U.S. printing).
Add a photo to this gallery 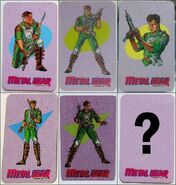 Trading cards that were included in the Famicom version. Each copy of the game contained a random card with a unique serial number.

Full package including clockwise the manual; the dust jacket; the map; the packaging; and the game pak.

NES game pak, map and manual (front).
Add a photo to this gallery