Metal Gear: Ghost Babel (Metal Gear Solid outside of Japan) is a 2000 stealth action game produced by Konami for the Game Boy Color based on the 1998 PlayStation game of the same name.

Ghost Babel is not a port of said game but an original game made specifically for the Game Boy Color. Ghost Babel is a non-canon game that serves as an alternate sequel to the events of the original Metal Gear. The game is set seven years after the events of Operation Intrude N313.

Ghost Babel uses the same overhead view of the early Metal Gear games for the MSX2 and Nintendo Entertainment System. The gameplay format is largely similar to the previous 2D Metal Gear game, Metal Gear 2: Solid Snake, in addition to several elements from Metal Gear Solid. As with previous games, the objective is to infiltrate an occupied enemy base while avoiding detection from guards and surveillance systems. The player can acquire numerous items and weapons to help them fulfill their mission. Unlike the earlier MSX2 games, the game's screen scrolls while the player is moving through a single area instead of using flip screens. Another difference is that Solid Snake can now move in eight directions instead of four, allowing him to move diagonally in addition to the four basic directions. The player can also lean into walls and move the position of the camera above Snake's back like in Metal Gear Solid and tap walls. Almost all the weapons in Metal Gear Solid are included with the exception of the Stinger missiles, which required the use of the radar in Metal Gear 2, and the sniper rifle. Like in Metal Gear 2 and Metal Gear Solid, the player can use the Codec to receive information from allies and save their progress.

Unlike the console installments, Ghost Babel uses a stage-based structure, with a total of 13 stages and doesn't have a multiple playthrough option. After completing a stage, the player's performance is graded from "Terrible" to "Excellence." The player can replay previously completed stages in the Stage Select mode for a higher ranking. After the game is completed, a special sub-menu becomes available where the player can replay the stages with new objectives (such as FOXHOUND emblems or completing the stage without being seen). Other additional game modes include VR Training, where the player can test their sneaking and shooting skills in over 180 missions (most of which are taken from Metal Gear Solid: VR Missions) and Vs. Battle, where one player competes against another player in a mission via the link cable. After completing all the Special Mission stages, a mysterious person named No. 4 makes a cryptic reference to the unknown participant taking part in the VR missions, referring to the participant as "Jack."

In Stage 11, there is a secret room containing the destroyed remains of the TX-55 Metal Gear. Calling Campbell while looking at the remains will trigger a special Codec conversation about it.

After completing the game, a hidden Codec frequency (140.07) can be accessed in every stage to listen to a radio show called IdeaSpy 2.5. This is only for the Japanese and European versions of the game.

"Early 21st century. An incident of unprecedented magnitude sends shockwaves trhough the highest levels of the U.S. Government: A prototype bipedal armored vehicle, Metal Gear, has been seized along with its nuclear payload by an armed group. In a radical response to ths crisis situation, the government calls in Solid Snake, the master saboteur who singlehandedly brought down the fortress state of Outer Heaven seven years ago."
―Prologue in the Ghost Babel manual.

Seven years after the events of Outer Heaven Uprising, a C-5 Galaxy transport plane containing a U.S. funded Metal Gear prototype codenamed "GANDER" is hijacked en route to South America by a dangerous separatist rebel group, located in the small South African country of Gindra, known as the Gindra Liberation Front, led by General Augustine Eguabon. The group plans to use Metal Gear to finally win the civil war it has been engaged in. Roy Campbell is called in to convince retired FOXHOUND agent Solid Snake to come out of retirement for one last mission: to infiltrate Gindra and destroy Metal Gear. Snake refuses initially until Campbell reveals that GLF's fortress, Galuade, was formerly Outer Heaven, where Snake had destroyed the original TX-55 Metal Gear years ago. Snake consents to go through with the mission, commanded by National Security Adviser Steve Gardner. Snake then met his support staff, consisting of Campbell, Mei Ling, mercenary expert known as "Weasel" and Brian McBride, CIA agent. Snake is also informed that the United States Army's Delta Force, at the behest of General John Parker, Army Chief of Staff, was already inside the fortress, and that Snake had to carry out the mission in concert with them.

According to Hideo Kojima, Ghost Babel was developed due to the request of Konami Europe to release a Game Boy Color version of Metal Gear Solid,[1] due to the European market having very positive pre-release reception to the game.[2] The title itself shares its initials with that of "Game Boy." Another reason he did so was because Kojima, in an effort to explore for himself the question of "what is a game", wanted to see how it would work in sprite form via the Game Boy, as it lacks actual polygons unlike the PS1, while at the time he was researching how to make a Metal Gear game for the PlayStation 2.[2] Shinta Nojiri also acknowledged that, although they tailored the game specifically to work within the limits of the Game Boy, hence the inclusion of stages, they may have come close to "cramming" everything in.[2] The pixel art for the game was also developed by Ikuya Nakamura, who also did the polygon designs for Metal Gear Solid, causing Kojima and Nakamura to joke that he's slowly killing himself with the effort he puts into the designs. Kojima also stated he worked on developing the game with the intent of not having it seem "dumb" to players who have already played Metal Gear Solid.

Since the game was developed for Game Boy Color, a platform that had a younger user base than the PlayStation, the "Fogger", a smoke emitting device, replaces Solid Snake's traditional cigarettes. However, Snake can be seen smoking in the story intro, though the cigarette itself is not shown.

The game was rated "E" for Everyone by the ESRB. Despite this, however, there are some adult-nature aspects in the game, including mild profanity, Pyro Bison's death throes of reacting with ecstasy as he burned himself alive, the various references to ethnic cleansing throughout the game, Snake committing patricide, Jimmy Harks being blown to bits, references to racism in Slasher Hawk's backstory, Marionette Owl being a serial killer (as well as his backstory and the implication that he was sent to Hell upon death), a brief alcohol reference in the beginning of the game, Weasel making a joke about "women" and "men" making an American brass tick, and references to murderous dysfunctionality within Weasel's backstory, as well as broken families and infidelity in Chris Jenner's backstory. According to Hideo Kojima and Nakamura, these more intense elements in the story, even by the standards of Metal Gear Solid, were the result of him juggling trying to be considered worthy of Metal Gear while at the same time surpassing it, as well as trying to market the game to Elementary School children and at the same time keep the franchise's hard-boiled themes intact.[2]

Upon its release, Ghost Babel received critical acclaim, achieving an average of 95.61% on GameRankings. The game is the 25th best-rated game on the site and is the most critically acclaimed game in the series.[3]

IGN gave Ghost Babel a perfect 10.[4] The game was ranked #11 in Nintendo Power's best Game Boy/Game Boy Color games list, praising the game for successfully bringing elements from the 3D games. They also thought that the game was better than the previous two 2D installments. Game Informer ranked the game #8 in their 25 Best Game Boy Games of All Time list.[5] GamesRadar listed Ghost Babel as one of the best Game Boy Color games.[6]

References in other Metal Gear games

In Metal Gear Solid 2: Sons of Liberty, the malfunctioning Colonel AI will call Raiden and give him a mission briefing for infiltrating the fortress Galuade. He will also use Campbell's portrait from that game occasionally during the malfunction. Also, a poster of Chris Jenner and Solid Snake appears on a wall in the computer room in the Big Shell.

The re-released versions of Metal Gear 2 reused Campbell and Solid Snake's Codec portraits from Ghost Babel for their transceiver portraits, although they were given color instead of green monochrome.

The Five-seveN pistol, included in Metal Gear Solid 4: Guns of the Patriots, is described as the gun that Snake used in Galuade.

The logo for Ghost Babel can be found in a guard shack or on a barrier in the Déjà Vu/Jamais Vu missions in Metal Gear Solid V: Ground Zeroes. Kazuhira Miller, when doing commentary on the Easter eggs, referred to it as "METAL GEAR... something something..."[7] 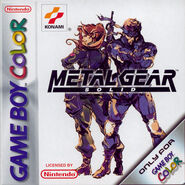 Promotional art of Snake and Chris by Yoji Shinkawa, used for the Japanese and European packaging.