Maverick Security Consulting, Inc., also known as MSC, was a private military and security company that was dispatched to a developing country to help it repair itself after a costly civil war in 2018. It was located in Nevada,[1] although they had a field operations office at Denver, Colorado,[2] and an HQ in Sochi International Airport. Although technically a PMC, various Maverick members preferred to call themselves by the term "private security providers," due to the negative stigma applied to PMCs as a result of the events of 2014. In addition, their primary methods of operation was supplying security to their clients, specifically of the deterrence kind.[3]

After the events of the Guns of the Patriots Incident in 2014, Boris founded Maverick along with several of the surviving members of the Paradise Lost Army. A condition Boris made to the former PLA members was that they fight for what they believed in, and that they keep their actions clean.

Raiden was hired into the PMSC full-time as part of VIP protection and military training, among other duties when he learned of the group from Boris. Raiden likewise accepted those jobs as a means to support his family (Rosemary and Little John) without having to return to the battlefield, when it was suggested to him by Boris (whom he knew since his first cyborgification at Area 51). They did at least one mission in the European country of Montenegro that Raiden was involved in, although it was implied by Maverick's military advisor, Kevin Washington, that the mission grew more complicated in spite of Raiden's claim of having reviewed the mission briefing before being dispatched.

From 2015 to 2018, Maverick was part of a three-year recovery effort for an African nation that had been through a costly civil war. The country's prime minister, N'mani initially had doubts about them, believing that their status as a PMSC meant they propegated war, although he later admitted that they helped train his army well. As Maverick anticipated that there might be attacks on the Prime Minister's limo by an anti-N'mani faction, they also supplied at least three Armored Personnel Carriers with both Maverick and National soldiers on board in order to ensure that even guerilla soldiers would not attempt to attack the Prime Minister. However, they ended up ambushed by a PMC composed of cyborgs, which Courtney stated that her initial research indicated that the PMC was "unaffiliated" with any of their competitors.

After Raiden ended up caught in a battle with an anonymous Cyborg Ninja only known as Samuel Rodrigues that resulted in him possessing severe lacerations, a damaged left retina, and the removal of his left forearm, thus forcing him into emergency treatment,[4] Maverick later recovered the arm and proceeded to retrieve files stored on it, requiring a weekly retrieval process due to the files being corrupted, as well as highly classifying the retrieval to prevent competing PMCs from gaining access to the data.[5][6] Maverick eventually managed to find a file cluster that was password protected, requiring Maverick agents to decode the password before accessing it.[2] It later found another password-encrypted file cluster from Raiden's arm, relating to Raiden's time at Force XXI. This time, they attempted to recover the corrupted Force XXI training log data, although because the data was corrupted, they ended up having to purge it and then move it to a quarantined file.[7] Raiden's aforementioned injuries, combined with his personal request to do a full-on reconstruction of his body and their regular cybernetics specialist going into hiding for unknown reasons, resulted in Maverick hiring the German cybernetic specialist known as "Doktor" to aid in the surgical reconstruction effort for Raiden. Doktor, at the time, had not possessed prior experience with full-on body reconstruction.

As a direct result of this attack, which was instigated by the PMC Desperado Enforcement LLC., a PMC known to support terrorists and criminals, Raiden also took active battlefield missions for Maverick that directly related to Desperado. A few weeks after the incident, Maverick was called by the few leaders in Abkhazia that survived a coup d'état by the terrorists under Desperado's control. Raiden, in his new armor, was dispatched to halt the coup and restore what was left of the rightful government. Also as a direct result of the events in Africa, in particular the lack of funding for Maverick that was partially responsible for their failure to halt Desperado, Boris also had to put a temporary freeze on their planned jobs, including conducting drills for the Brazilian special-ops forces in Rio, playing a terrorist organization for a training program for a South African anti-terrorism police unit, and conducting on-site security consulting in Switzerland, largely to keep Raiden focused on the mission at hand, as he regretted his not putting full resources to guarding N'mani.

Maverick later dispatched Raiden and Bladewolf into Mexico after it was discovered that a research facility owned by Desperado was located there. However, they also discovered in the process of the mission the Sears Program conducted by Desperado, with the PMC World Marshal, Inc. also being involved, specifically Steven Armstrong, a Senator from Colorado who was previously investigated by grand jury for involvement with the latter PMC. In large part because of Armstrong's involvement, Maverick was unwilling to get involved in stopping the plan, much to Raiden's chagrin.

Eventually, Raiden, unwilling to sit back and let them conduct the Sears Program, and also because he wanted to avoid making Maverick responsible for his actions in commencing a corporate raid against World Marshal, Inc., abruptly resigned from Maverick without warning. During a chase in Downtown Denver, Boris discovered this and angrily demanded an explanation for his behavior, although Raiden cut off their conversation in order to evade cops coming directly at him. When Raiden later explained himself properly, Maverick decided to continue supporting Raiden, albeit in an unofficial capacity. Raiden ultimately resigned completely from Maverick after halting Operation Tecumseh. Maverick was also involved in the creation of a new cyborg firm to give the cyberneticized children a chance to live a life outside of either poverty or being subjected to the Sears Program, and also gained a new recruit.

During their mission in the late 2010s, Maverick wore khaki pants and combat boots, a navy-blue T-shirt, a chest harness, either a khaki ballistic helmet or a black baseball cap, and a leg holster. Some also wore headsets for communication, as well as combat goggles. Some also possessed cybernetic implants, primarily around their neck area. A few of the soldiers, including Raiden, were cyborgs due to being wounded in action, having paid for the process themselves.

Several of their weapons included customized FN F2000 Tacticals with AR-15 front sights, Kalashnikov-style gas blocks, and ACOG scopes; a conversation with Boris names these as "MAK-200" rifles, and suggests they are of Russian origin. In addition, they also possessed at least one Ural truck and at least four Stryker Armored Personnel Carriers, capable of transporting four soldiers, and manned by a gunner.[8] Shortly after the disastrous events in Africa, they also had a flying wing, the MQ-133C, that was specially modified to carry Raiden, due to his cybernetic suit.[9] They did not carry the latest in fragmentation grenades, however, with Boris implying that their reason was due to costs.

Maverick also had a special customized car developed specifically for black ops. It included an autopilot function, and was heavily armored enough to not be completely destroyed by a RPG if hit.

The MSC's main logo was of a white stallion head with a blue stylized lightning bolt streaking across the neck, with the letters "MSC" and words "Security Consulting" below it. Another, lesser used logo simply had the word "Maverick" displayed.

Maverick Security Consulting, Inc. first appeared in the 2011 Spike Video Game Awards trailer for Metal Gear Rising: Revengeance. It was later identified by name in a redacted letter on the Metal Gear Rising teaser site promoting an update on April 30, 2012, that mentioned that Raiden required emergency surgery from injuries including severe lacerations, a damaged retina, and amputation of a body part. The exact body part was never specified, although a later letter issued with a USB device based on Raiden's arm that was a bonus for Game Informer and EGM, mentioning the recovery of Raiden's arm from the battlefield along with plans to recover corrupted files on the arm, implied that the body part that was amputated was his left arm.

On the viral marketing site and to a lesser extent the letter to various magazines, Maverick was mentioned to be at One Location Road in Denver, Colorado, area code 80204.[2] This was changed to Nevada in the final version. 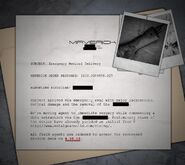 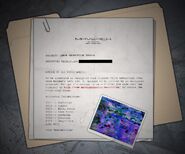 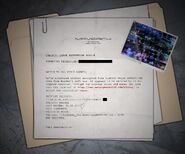 Maverick logo as it appeared on the Make It Right site.