During the 1990s, the MAC-11 was a standard-issue machinegun for United States Army Special Forces Unit FOXHOUND, and was nicknamed "the CIA's toy" in tighter circles. During this time, the FOXHOUND logo featured a MAC-11 being fired by a cartoon fox.

The Submachine Gun is a weapon that can be procured by the player in both Metal Gear and Metal Gear 2: Solid Snake. It is identified as the MAC-11 in the user's manual for each game. 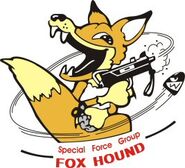 FOXHOUND-issued MAC-11 from Metal Gear 2 user's manual.
Add a photo to this gallery

Retrieved from "https://metalgear.fandom.com/wiki/MAC-11?oldid=249646"
Community content is available under CC-BY-SA unless otherwise noted.