The M79 grenade launcher is a single-shot, shoulder-fired, break-action grenade launcher that fires a 40x46mm grenade. It is famous for its distinctive shape, which resembles a sawed-off shotgun.

The M79 was first developed during the 1960s as a result of Project Niblick. It was formally adopted in December 15, 1960, and the first models were delivered to the United States Army in 1961. U.S. soldiers nicknamed it the "Thumper" because of its distinctive report. It eventually saw use with American soldiers in the Vietnam War and with British troops in the Falklands War, though by the end of the former, it had mostly been replaced by the M203 underbarrel launcher (M79s were still used by Reserve and National Guard units, however). Since the invasion of Iraq, some M79s have been reissued since they are more accurate and have a greater effective range than the M203. These M79s are once again being phased out in favor of the new M32 (MGL-140) grenade launcher.

The M79 was adopted for use by the mercenary nation of Outer Heaven. During the Outer Heaven Uprising, Solid Snake procured one of the M79 launchers after taking out four mercenaries who were guarding it, and made use of it by destroying a Hind D gunship and an armored bulldozer.

The M79 later saw action during the Iraq War.

The grenade launcher featured in Metal Gear is only referred to as the M79 in the instruction manual; the weapon's model is not specified in-game. The actual design of the launcher also differs between the manual's artwork and the in-game sprite, bearing more similarities to the Federal M201-Z grenade launcher in Hong Kong. When used, it erroneously fired pineapple grenades.

Although it is not usable in any other games, the M79 itself makes a reappearance in the non-canonical game Metal Gear Acid 2 as the primary firearm of Chaigidiel, one of the escaped test subjects of SaintLogic Inc.﻿ 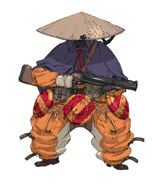 Chaigidiel from Metal Gear Acid 2 wielding an M79.
Add a photo to this gallery

Retrieved from "https://metalgear.fandom.com/wiki/M79_grenade_launcher?oldid=249620"
Community content is available under CC-BY-SA unless otherwise noted.