30 round box magazine or other STANAG Magazines.

The US Carbine, Caliber 5.56mm, M4 is a firearm tracing its lineage back to earlier XM177 carbine versions of the M16, all based on the original AR-15 made by ArmaLite. It is a shorter and lighter version of the M16A2 automatic rifle, achieving 80% parts commonality with the M16A2.[1] The M4 has selective fire options including semi-automatic and three-round burst (like the M16A2), while the M4A1 has a "full auto" option in place of the three-round burst.

Variants of the carbine built by different manufacturers are also in service with many other foreign special forces units, such as the Australian Special Air Service Regiment (SASR). While the SASR uses weapons of essentially the same pattern built by Colt for export (Colt uses different models to separate weapons for the U.S. military and those for commercial/export purposes), the British SAS uses a variant on the basic theme, the SFW built by Diemaco of Canada. Although Diemaco was purchased by Colt and renamed Colt Canada, the Diemaco names and related firearms were kept.

Like all the variants of the M16 assault rifle, (A2 and on) the M4 Carbine and the M4A1 Carbine can be fitted with many accessories, such as night vision devices, laser pointers, telescopic sights, bipods, either the M203 or M320 grenade launchers, the M26 MASS shotgun, and anything else compatible with a MIL-STD-1913 Picatinny rail. Other common accessories include the AN/PEQ-2, Advanced Combat Optical Gunsight (ACOG), and M68 Aimpoint. EOTech holographic weapon sights are to be part of the SOPMOD II package. Visible and IR (infrared) lights of various manufacturers are also commonly attached using various mounting methods.

Usage during the Big Shell Incident

The M4A1, with the M203 grenade launcher attachment, was used by SEAL Team 10 during their disastrious mission aboard the Big Shell, in 2009. The M4 was also used by Iroquois Pliskin, a.k.a. Solid Snake, having infiltrated the facility in the guise of a Navy SEAL. Pliskin's M4 was temporarily used by Raiden, in order to ward of terrorist member Vamp in the Strut B transformer room.

During the same incident, the M4A1, with grenade launcher attachment, was also utilized by the Hi-Tech Soldier attack teams of the Sons of Liberty.

The M4 in Metal Gear Solid 2: Sons of Liberty can be compared with the AKS-74u in the game, although the latter has a suppressor available. The weapon is highly accurate, possesses a high rate of fire, and is equipped with a visible red-dot laser. The M4A1 is ideal as an 'absolute combat weapon' in the case the player is forced against hordes of enemy soldiers, especially in Arsenal Gear where the player fights alongside Snake, who automatically offers ammunition when the player's ammunition level is almost depleted.

In Metal Gear Solid: Portable Ops Plus, the M4 is a viable alternative to the dimensionally longer, 20-round per magazine M16A1; otherwise both weapons share very similar features including their iron sights and fully automatic firing rate. Unlike MGS2, there is no laser-sight. This is the standard issue weapon of the SEAL and High-Tech Soldiers. For a description of the M4 (SOPMOD) within the game, see the M4 Custom article instead.

"An improved model of the M4 carbine, which is itself a shorter version of the M16A2 rifle adopted in 1994 by the U.S. Army. The M4A1 adds a detachable carrying handle and a full-auto firing mechanism, among other features. it has now established itself as the standard shoulder arm for Special Forces. Fires 5.56mm x 45 ammo. uses 30-round box magazines."
―M4A1 description in Metal Gear Solid: Portable Ops Plus.

Another M4 variant appears in Metal Gear Solid 4: Guns of the Patriots as the M4 Custom, which features a fully customizable Rail Interface System (RIS) and a different trigger group to a standard M4, allowing both full auto and three shot burst fire. Whilst such an RIS system is available on real M4A1 carbines, it was missing from Metal Gear Solid 2 due to engine limitations.

Dummied code in the PC version for Ground Zeroes indicated that the M4 was planned to be in the game. 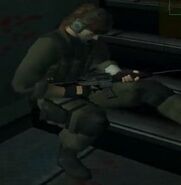 Pliskin with the M4. 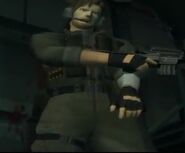 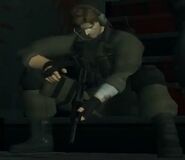 Retrieved from "https://metalgear.fandom.com/wiki/M4?oldid=257013"
Community content is available under CC-BY-SA unless otherwise noted.