The M1 Abrams is a third-generation main battle tank produced and used by the United States. It is named after the commander in the Vietnam War and former Army Chief of Staff member General Creighton Abrams, and was designed for modern armored ground warfare. It comes in three main variants: The M1, the M1A1, and the M1A2 (a fourth, M1A3, variant is currently under development).[1]

Zanzibar Land utilized M1 tanks as part of its Tactical Army's Heavy Tank division, prior to its fall in 1999.[2]

In February 2005, an M1 tank was utilized by the rogue FOXHOUND during the Shadow Moses Incident. Vulcan Raven and two Genome Soldiers used one of the two M1's stationed on Shadow Moses Island to battle against Solid Snake in a canyon. The M1 was equipped with advanced vetronics, which allowed it and the gunner to track a target once it was locked on to the target. Its main gun also had an effective firing range of up to 3000 meters, and had a maximum speed of 45 mph (72.4km/h). Snake was able to evade the tank's main gun using chaff grenades, and disabled the tank itself by throwing frag grenades towards the top hatch while the gunner was exposed to fire, after first slowing it down by damaging its treads.

The second M1 tank was still housed in the abandoned hangar on Shadow Moses when Snake returned there in 2014.

In the original Metal Gear Solid, the M1 tanks are depicted as the M1A1 variant, due to the lack of a commander's independent thermal viewer (or CITV). During the revisit to Shadow Moses in Metal Gear Solid 4: Guns of the Patriots, the tank stationed in the hangar building is instead an M1A2, identifiable by the CITV, a cylindrical object located on the forward left corner of the turret.[3]

Calling Otacon will have him reminisce about Snake single-handedly defeating a tank with grenades, as well as noting that he once asked a military officer if it was possible to do so. According to Hideo Kojima on his Twitter account, this was based on a real life conversation between him and a tank squad leader during development of Metal Gear Solid. He also said the conversation made sense after watching the 2014 film Fury.[4]

The blowing up of the tank with grenades is a recreatable scene in Déjà Vu, one of the extra ops of Metal Gear Solid V: Ground Zeroes, although the actual vehicle is closer to an APC.

The M1 Abrams, alongside the Hind D, will have a pre-order exclusive player figurine for the upcoming board game based on Metal Gear Solid. 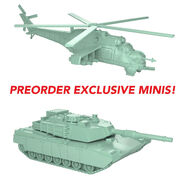 M1 Abrams and Hind D pre-order exclusive figurines for Metal Gear Solid: The Board Game.
Add a photo to this gallery

Retrieved from "https://metalgear.fandom.com/wiki/M1_Abrams?oldid=270783"
Community content is available under CC-BY-SA unless otherwise noted.