This article is about a fictional representation of a real world subject.

Richard McGonagle
Lyndon Baines Johnson was the 36th President of the United States, taking office after the assassination of John F. Kennedy.

Johnson served as the 37th Vice President under Kennedy. Immediately after Kennedy was shot on November 22, 1963, Johnson took the oath of office aboard Air Force One at an airport outside Dallas.

After the failure of the CIA's Virtuous Mission in Tselinoyarsk, President Johnson received a hotline call from Soviet leader Nikita Khrushchev, who blamed the United States for the nuclear attack on OKB-754. Johnson assured Khrushchev that the affair had been orchestrated by The Boss, an American defector, and Yevgeny Borisovitch Volgin, a GRU colonel. However, Khrushchev demanded that America prove its innocence by eliminating The Boss, in order to avert a potential nuclear war. With America's reputation on the line and the two nations on the verge of World War III, the CIA was authorized to execute Operation Snake Eater, which succeeded in eliminating The Boss and her Cobra Unit, along with Volgin and the nuclear-armed Shagohod.

Following the operation, Johnson awarded the Distinguished Service Cross and the title of "Big Boss" to the mission's solo operative Naked Snake. At first, Snake was reluctant to shake Johnson's hand but eventually relented. Despite the mission's success, Johnson was relying on the KGB to keep a lid on the events in Tselinoyarsk, a strategy that the KGB could use as leverage in future negotiations with the American government.[2]

As President, Johnson sent additional troops to the already war-torn Vietnam, further exacerbating the situation there. In 1968, he announced an end to the bombing of North Vietnam and at the same time withdrew from the 1968 Presidential race.

Johnson's succession to the presidency due to JFK's untimely death was partially the reason why Naked Snake was reluctant to shake his hand at the award ceremony, in addition to his knowledge about the true nature of Operation Snake Eater.[3]

In the late 1960s, Johnson was responsible for initiating the Les Enfants Terribles project.[4]

President Johnson was voiced by Richard McGonagle in Metal Gear Solid 3: Snake Eater. His voice sounds distinctly different during his telephone conversation with Khrushchev, when compared to his small speech during Big Boss's award ceremony. The former was closer to how he sounded in 1964,[5][6] while the latter was closer to how he sounded late in his presidency.[7][8] During the game's development, it was originally intended that Big Boss be awarded his title and medal by the CIA Director, until it was decided that Johnson should do it instead.[9] In the Japanese version, he was voiced by Shinji Nakae.

In real life, President Johnson died of a heart attack on January 22, 1973 at the age of 64. He was also one of seventeen Presidents not to run for a second presidential term, which was largely because of growing negative publicity of the Vietnam War (and particularly, the official reporting of the Tet Offensive). 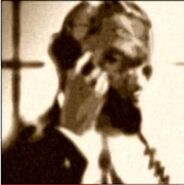