Laughing Octopus, also known as The Devil's Child, and twice informally referred to as Tentacles, was the stealth expert of the Beauty and the Beast Unit. She suffered from a severe case of Post Traumatic Stress Disorder due to traumatic events in her childhood. Like all the members of the BB Corps, she was mentally unstable and prone to outbursts and mood swings. In Laughing Octopus' case, she was prone to outbursts of manic laughter. She was equipped with an advanced OctoCamo suit, along with a number of mechanical appendages that served a variety of purposes.

The young woman who became Laughing Octopus was born in a small seaside Scandinavian town known as the Devil's Village. The primary meat consumed in this village was the octopus, also known as devil fish, caught nearby. An anonymous, crazed cult nursed a deep hatred for the village. When Laughing Octopus was a teenager, the cult accumulated enough heavy weaponry to launch a deadly overnight assault against the town. The conflict concluded when the cult rounded up the survivors and executed them one by one. However, instead of executing the girl (whom they referred to as "The Devil's Child"), they forced her to participate in the torture of her family and friends. They also forced her to act as if she enjoyed it all by making her laugh. Fearing for her own life, she obeyed her captors and massacred her entire family.

The incident left her mind broken beyond repair and prone to fits of manic laughter, especially during combat.

The woman was somehow later recruited into the Beauty and the Beast Unit and informed by Liquid Ocelot that killing Solid Snake would cleanse her of pain, fury, and sorrow. She was fitted with an OctoCamo suit developed by DARPA and a tentacle-bearing helmet and a mask and took up the name "Laughing Octopus."

In 2014, Laughing Octopus and the Beauty and the Beast Unit attacked local rebels in the Middle East. She displayed impressive camouflage abilities, hiding in the shadows before striking with her deadly tentacles and killing several soldiers. She was later sent to South America, where the French PMC Pieuvre Armement was fighting the South American rebel soldiers. Upon arrival at Liquid's safe house, she and Vamp secured the area and captured several rebel forces. However, upon Vamp's request, she spared one soldier, although she also told the same soldier, while assuming Snake's appearance using FaceCamo, that the rebels should be wary of "this man's face."

Laughing Octopus was then stationed at the research lab where Naomi Hunter was being held. Snake eventually reached the lab and made contact with Naomi, but she was quickly escorted off the premises by Pieuvre Armement troops and the lab was rushed by FROGS under Octopus's command. After Snake eliminated the FROGS, Octopus entered the lab herself, formally introducing herself to Snake before attacking him.

Despite her considerable camouflage and ambush skills, Snake was able to defeat Octopus. Once defeated, her octopus helmet and face mask tumbled to the ground, and Octopus stumbled forward. Her bodysuit flickered on and off as she muttered that she was an octopus, and her tentacles were beyond her control. Octopus then dropped to her knees and began to vomit what appeared to be ink while laughing hysterically. Suddenly, Octopus sobered, retracting her earlier comments and explaining that in reality she was scared of the things she was laughing at. As she talked, the monstrous and distorted voice she had while in her Beast form slowly turned normal. She then slowly advanced toward Snake, attempting to psychically inflict her trauma on him, but she was again defeated, causing her to fall to the floor, curling into the fetal position. Snake then checked her pulse, and then procured her FaceCamo mask for his own purposes.

She was later mentioned by Snake to Meryl Silverburgh in Eastern Europe, explaining where he got his FaceCamo. During this instance, he also informally referred to her as "Tentacles" as a reference to her octopus-like nature.

The trauma she had suffered as a child made Laughing Octopus irrevocably insane. Her insanity manifested itself in fits of loud, manic, unnerving laughter, especially in the midst of battle.

Unlike the other BB Corps members, Laughing Octopus wore no armor. Instead, she wore a stealth suit that was able to mimic the color and texture of any background she stood against, very similar to the ability of Snake's OctoCamo suit to do the same. Indeed, the suit drew on the same DARPA technology used in Snake's OctoCamo suit.

She also possessed a full-face mask covering her entire head. This mask had the same abilities as the suit. With this combination of camo mask and camo suit, she could completely camouflage herself from head to toe, totally blending into any background. This allowed her to remain hidden and undetected though she were but a few feet away from an enemy, directly in front of him. Her camouflage ability was not limited to backgrounds. She could mimic the appearance of machinery or objects such as mannequins. She could even take on the appearance of any allies she knew her foe had, to fool him into coming closer to her so she could attack him. To enhance this illusion, she had the ability to perfectly mimic the person's voice.

However, unlike Snake's OctoCamo suit, neither her suit nor her mask had any shielding against body heat. Thus she was clearly visible in thermal vision and so could be easily spotted by enemies equipped with such vision, though still less visible than users of Stealth Camo.

Laughing Octopus wore a helmet to which were attached four long tentacle-like mechanical appendages.These were her main offensive weapons. Each had three structures at its end that together made a three-pronged pincer, allowing her pick up and manipulate objects with each tentacle. These tentacles were an evolved form of Solidus Snake's snake armed combat suit. Each tentacle and its pincers was under her mental control. She used them as effortlessly as a normal person uses his hands and arms. She could use them to bludgeon, impale, grab and smash or wrap and crush foes easily. In addition, each tentacle was capable of emitting an electric shock of high enough voltage to electrocute an enemy. Also, she could use them to climb and hold on to structures and even use them for locomotion, all at great speed.  She could even use them to hold onto a ceiling, lying prone against it, face down, above an enemy. By holding onto a large vehicle such as a Stryker, she could allow herself to be transported.

An additional attack she was wont to use was to curl up with the tentacles forming a ball around her and roll at an enemy like a bowling ball. This attack, given the speed at which she rolled and the unyielding material that the tentacles were composed of, was akin to being struck by a car; serious injury or death was the result.

Defensively, she was able to release a cloud of thick, inky black smoke, much as her namesake releases a cloud of inky black substance. Like an octopus, she used this cloud to escape attack. Not only did this cloud obscure regular vision, it shielded her body heat, making thermal vision unable to penetrate it. She released a group of small explosives in the cloud, making any attempted pursuit through the cloud dangerous. Moreover, the explosives homed in on the enemy. When wounded, her body bled a similar substance in liquid form. This sometimes gave away her position if she were concealed on a ceiling above an opponent; it could drip down and land at the opponent's feet.

In her beauty form, she, alongside the rest of the unit, also was capable of setting foes on fire by touch.[1]

Because of her earlier childhood trauma driving her insane, Laughing Octopus, regardless of her true emotions at the time, frequently went into hysterical laughter, especially when fighting and killing her foes. Likewise, she also frequently referred to her actions as being "funny" and "hysterical," although she actually feared her actions. The symptoms were noted by Rose to resemble Ganser syndrome. She also was shown to lack self-control, as during her operations in South America, she proceeded to wantonly slaughter any and all rebel forces that were imprisoned while wearing her OctoCamo in Snake's visage, and only was prevented from killing one of them by Vamp throwing a knife at her and ordering her to spare one.

Laughing Octopus appears in Metal Gear Solid 4: Guns of the Patriots, in which she is fought by the player during a boss battle. Depending on the player's actions, she either dies or falls unconscious, with her body surrounded by swirling flower petals. If Octopus is defeated lethally, she also appears to be engulfed in blue flames. If the player used non-lethal methods to neutralize her, she would be snoring unlike the other B&B members should they also be non-lethally defeated. If the player used lethal methods, she would be silent. Either way, Snake reacts with mere flat acknowledgement, and moves on. Laughing Beauty's appearance is based on that of South African model Lyndall Jarvis.

Laughing Octopus holds the distinction of being the first character to use the word "fuck" in the English version of the series. However, in the Japanese version of the series this distinction belongs to EVA in Metal Gear Solid 3, who says "Fuck you" to Colonel Volgin. This was changed to "Go to hell" during localization. The line in question, "It's all so FUCKING HYSTERICAL!", said right after Snake neutralized the Haven Troopers accompanying her, mirrored a line in the film Road to Perdition.

Laughing Octopus later appeared in Versus Battle, where she fought against Fortune.

If the player brings out the Metal Gear Mk. II while Octopus herself is disguised as the Mk. II, she will say: "What?!", and disappear.

Also, a phase of the battle allows Snake and Laughing Beauty to enter a "white world" in which Snake must survive for three minutes. If Snake pulls out his camera, Beauty will pose suggestively for him. The timer also keeps ticking. Playing the song "Oishii Two-Han Seikatsu" makes Laughing Beauty dance for Snake.

Laughing Octopus in the Middle East, in 2014. 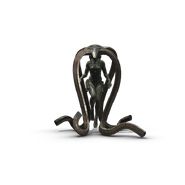 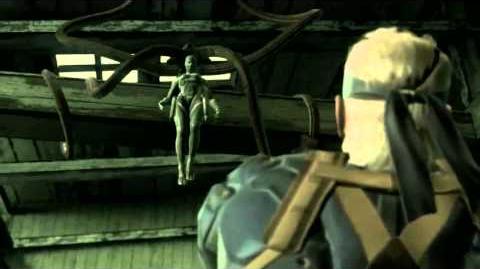