John Turner was a former U.S. Navy Intelligence Officer and served as one of Lt. Solid Snake's comrades during Operation 747. Having been in service of the Navy's Intelligence Agency six years prior to the mission,[1] he helped Snake infiltrate an enemy base by luring away the guards and allowing himself to be captured. It was thought that he was locked up in a train heading towards the main enemy complex, but it was later revealed that the personnel had switched him with a double to lure Snake into a trap. The real John Turner was reported as missing in action after the mission's completion and was later removed from official Navy records.

John Turner is a supporting character in Snake's Revenge. According to the game's manual, Turner was a camouflage expert who disappeared in South Vietnam during the Vietnam War in 1969. He was also nicknamed "J.T." The manual incorrectly states that he was a spy for the U.S. Air Force's Intelligence Department instead of the U.S. Navy. In addition, Turner's bio incorrectly features Snake's portrait and vice versa.[2]

J.T.'s portrait in the Snake's Revenge manual. It was mistakenly placed above Snake's bio. 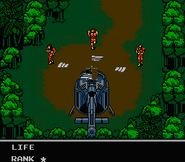 John Turner (left) at the jungle drop zone, during Operation 747.
Add a photo to this gallery

Retrieved from "https://metalgear.fandom.com/wiki/John_Turner?oldid=272696"
Community content is available under CC-BY-SA unless otherwise noted.