Haven Troopers, also known as FROGS or Frog Soldiers, were an army of elite, female soldiers equipped with powered suits that operated under Liquid Ocelot's direct command. They also accompanied members of the Beauty and the Beast Unit who acted independently.

In 2014, the FROGS ambushed Rat Patrol Team 01 and Old Snake at the Advent Palace in the Middle East. A fierce gunfight ensued, in which they demonstrated their impressive abilities of gunplay and acrobatic prowess, but ultimately Snake and his comrades emerged victorious.

They next encountered Snake in South America, once again ambushing him inside a small cabin and then patrolling some densely forested areas that Snake was forced to navigate through as he tracked Naomi Hunter. They were under the direct command of BB member Laughing Octopus in this particular case.

In Eastern Europe, they attempted to stop the van carrying Big Boss's remains. In addition, a small squad of FROGS aboard Liquid Ocelot's getaway ship gunned down surrounding forces of soldiers who had been incapacitated by Liquid's power over their nanomachines.

They later appeared on Shadow Moses Island, hunting for Snake during a strong blizzard as he fought Crying Wolf. Should all of the FROGS have been eliminated, Wolf had the option of calling for more reinforcements.

The elite soldiers made their final appearance aboard Liquid's Arsenal Gear-class warship, Outer Haven, during its battle with the USS Missouri. They were deployed in large numbers, meticulously searching every nook and cranny of the ship for intruders, never breaking formation nor letting down their guard. Besides completely covering the deck of the ship, they also attacked Snake just prior to his battle with Screaming Mantis. Additionally, a unit (using only their blades) was held at bay by Raiden in order to allow Snake to reach the inner bowels of the ship. After Snake and Otacon destroyed the Patriot AIs, the FROGS suffered a severe mental breakdown. The survivors were later rescued by the Marines and Army aboard the USS Missouri.

The Haven Troopers' characteristic heightened jumping ability and use of a catapult to launch themselves into the atmosphere and effect a dynamic entry earned them their nickname of "FROGS." They also possessed the ability to cling onto walls, allowing them to gain leverage over targets in urban environments, the mechanism of which was speculated to employ van der Waals force.

SOP and the nanomachines within their bodies allowed only a minimal psychological deviation from baseline values, meaning that these units felt essentially no emotion in combat. Upon their death, those internal nanomachines would combust, leaving them fully carbonized within seconds by bursting into blue flame. However, their nanomachines still retained some functionality after death, as demonstrated by Screaming Mantis's ability to manipulate their nanomachines. It was presumed that they suffered the same effects as normal PMC soldiers when the SOP system was shut down; the sudden rush of emotion and feelings caused them to have a serious (but non-fatal) mental breakdown.

Similar to other PMC soldiers, they also had their emotions suppressed via SOP, although to a far greater degree. However, they are still capable of feeling trace amounts of fear, namely when being held up or having a gun pointed to their face. Also, they do seem to feel some amounts of anger and disgust, such as when Snake is searching them during a hold up and touches either their groin or breasts. Some of even seem to express some forms of joy when Snake touches their breasts as well. When the SOP system was shutdown, a Haven trooper sitting in a boat can be seen comforting a comrade by holding her and stroking her head.

The Haven Troopers were mostly armed with the FN P90, a Belgian-made Personal Defense Weapon System, to combat enemies from short to medium ranges. The 5.7mm rounds used in the P90 have high velocity and low impact, while they have low shock and lack the stopping power of other rounds such as the .45ACP used by the Mk. 23 and Operator, they are designed to penetrate body armor with ease.

When serving as snipers, their weapon of choice was the DSR-1 sniper rifle, often used by German Special Forces. Due to its bullpup design, the DSR-1 is shorter than most bolt-action marksmen rifles while retaining good power and accuracy.

As their sidearm, the Haven Troopers used the Five-seveN 5.7mm pistol. It uses the same ammunition as the P90, benefiting from its accuracy and armor piercing capabilities despite being a handgun. For Close Quarters Combat, they used a short machete that was holstered in their right thigh plate carrier, and a garrotte[1] when countering any unarmed attacks, as well as several small throwing knives similar to the ones used by Vamp.

They have also been seen wielding XM25 airburst grenade launchers in Advent Palace.

Haven Troopers appear in Metal Gear Solid 4: Guns of the Patriots, and bear a notable resemblance to Arsenal Tengus from Metal Gear Solid 2: Sons of Liberty, who also wielded P90s and blade weapons.

Unlike regular PMC troops in Metal Gear Solid 4, the all-female Haven Troopers obviously cannot be knocked unconscious by grabbing their crotch after a body search (it turns into a grope). If Snake attempts this, the soldier will yell "Pervert!" "If you don't cut that out..." "You idiot!" or "You men are all the same!" and retaliate with an incapacitating kick. If you press triangle while searching her chest, the soldier may say "Hey...You're pretty good at that." Sometimes even moan. They may also grunt or angrily say "You...!" or "Hey!"

If a Haven Trooper sees an Emotive Magazine, they will go to it, stand to attention, and salute the BB Corps member displayed inside it, rather than be imbued with rage, joy, fear, or sorrow (depending on the opened page). This would suggest that the BB Corps would be part of their hierarchy up their chain of command, just below the command of Liquid Ocelot and Vamp.

During Act 2 on the Mountain Trail, the player, Raiden will mention that "...these PMCs have received some degree of scout training", explaining why they are able to detect the sound of the Solid Eye whenever the player attempts to use it while sneaking around them.

Shooting Haven Troopers with Emotive Ammo will cause them to immediately faint, due to SOP limiting their emotions in combat, unlike normal PMC troops who succumb to their emotions for a short time beforehand. Similarly, equipping the Big Boss FaceCamo causes the Haven Troopers to faint upon seeing it. This makes it a suitable item to use during the Advent Palace ambush in Act 1, and the boarding of Outer Haven in Act 5.

On the right side of their helmets, Haven Troopers have their own unit designation number painted on. Known numbers include 03, 67, 54, 56, 57 and 14. This may suggest that they themselves are regimented just like any other military unit.

Although the Haven Troopers themselves were not playable in Metal Gear Online, the player could, as a female character, acquire a full set of Haven Trooper armor should the player both have had the SCENE expansion pack, and have 20000 rwd points to pay for it. This was also available in the last moments for free prior to the permanent shutdown of all MG​O servers.

The Haven Troopers were given a mention in Rat Patrol Team 01's profile in their appearance in Konami's E3 Battle.

A squad of Haven Troopers ready their weapons after jumping up to the roof of Advent Palace.

A Haven Trooper fires at Solid Snake with her P90.

A Haven Trooper aims her DSR-1 at "Big Mama" while the latter is pursued by Ocelot's forces.

A Haven Trooper hunts Solid Snake with her machete.

A Haven Trooper's nanomachines combust upon her death, incinerating her body.

A group of Haven Troopers recover aboard a life raft, under the watch of a US Soldier.

An injured Haven Trooper is treated by a personnel from the USS Missouri.

An injured Haven Trooper is pulled out of the water by a U.S. soldier.

A holster that is used by Haven Troopers to store their machetes.

A Haven Trooper reloads her P90.

A Haven Trooper aims her Five-seveN handgun at Solid Snake.

A Haven Trooper clings on to the Advent Palace walls.

A DSR-1 similar to those used by Haven Troopers.

An XM-25 similar to those used by Haven Troopers. 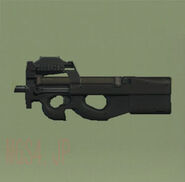 The P90 used by the Haven Troopers. 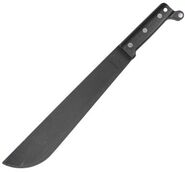 A machete similar to those used by the Haven Troopers. 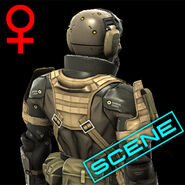 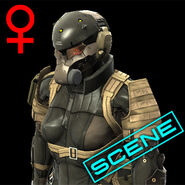