The Fox Engine is a cross-platform game engine created by Kojima Productions.[1] The development of the engine began after the completion of Metal Gear Solid 4: Guns of the Patriots with the goal of making the "best engine in the world." Fox Engine was revealed in the Konami pre-E3 press conference on June 3, 2011 as a tech demo and made its public debut at PAX Prime 2012. The engine allowed Kojima Productions to develop multiplatform games with a significantly shortened development time.[2] It also allowed the developer to move away from developing a game for a single platform.[3]

Metal Gear Solid: Rising was originally set to use Fox Engine, but it was cancelled.[4] Instead, Metal Gear Solid V: Ground Zeroes became the first game in the series to utilize the engine.

The Fox Engine is named after FOX and its logo sports Philanthropy's written-in-Japanese motto which means "to let the world be."

The Pro Evolution Soccer series by Konami is currently using the Fluidity engine, which was derived from the Fox Engine.

On February 21, 2012, a site named Development Without Borders owned by Kojima Productions was uploaded promoting the next MGS for recruiting staff at the Game Developers Conference pavillion between March 6th and March 9th including "Project engineers for the latest Metal Gear Solid targeted for high-end consoles and PC", "Engineers to help develop next-gen engine technology for use with the FOX Engine" and "Kojima Productions Brand Manager."[5][6]

On June 8, Hideo Kojima, in an interview with CVG, talked about Fox Engine: "One thing that we want to make clear is that Fox Engine is not just a graphics engine, it includes the entire toolset that we use to create games. It's a very powerful toolset and allows us to create games in more efficient ways. We can look at objects and gameplay in real time as we are developing, and it saves us spending lots of time making items that we may then decide not to use once they are ready to put in the game. Another area where Fox Engine excels is that it can be used to develop the same game on multiple platforms at once. It [Fox Engine Lighting Sample] was actually running on current hardware - it's running on PS3, 360 and current PCs. It's not something out of reach. One thing we paid a lot of attention to is lighting effects, the way light shines through and reflects off different materials, and this is something that couldn't be done in past generations but can be done with current generation platforms. The sample that you saw is based on a meeting room that we use every day. We recreated that room in Fox Engine as a test, and put the two side by side. When we first looked at it you could tell that things were different but a lot of it was just lighting effects, so our approach was to keep on refining those effects and implementing updates until it became really hard to tell the difference between the real thing and the Fox Engine version. Of course, the resolution will depend on the screen you are running it on, but we're using tricks to make it look really high. For example, because we're limited by polygons, we're using some programming tricks to resolve that issue by smoothing the image out to give the impression of a higher polygon count."[7]

On June 20, in an interview with IG Magazine, Hideo Kojima revealed that "There will be a MGS5 with the new Fox Engine, but what we showed was not the in-game play, or something like that. It was only a demo that we had developed internally and that we released [for Konami pre-E3 2011 press conference] because the lighting and all interactions with the environment had fooled everyone."[8]

On July 23, speaking with the PlayStation Blog about Metal Gear 25th Anniversary, Hideo Kojima said: "The Fox Engine is nearly finished, but the only way to be sure it works is to create a game at the same time and improve the engine with our tools as we go along. Originally we were going to do this for Metal Gear Rising: Revengeance, but a lot happened along the way and instead it is being made with the engine they have at Platinum Games. Production studios in Japan are nearly extinct, a fact that we have recognized for nearly 10 years, and although the Fox Engine is not finished we are ready to show what it can do… on August 30th in Japan to be more specific."[9]

On August 30, a demo of Ground Zeroes was shown at Metal Gear 25th Anniversary in which the Fox Engine's abilities was demonstrated.[10] Eventually a similar demo of the game was shown at PAX Prime 2012. The demo was running on a PC and played using an Xbox 360 controller. While the game and engine are designed with both Xbox 360 and PlayStation 3 in mind, Hideo Kojima stated the engine will cater to next-gen consoles.[11] He also stated "The thing is, this is not just a tech demo. This is an upcoming, new, open-world Metal Gear Solid game."[12]

In September 2012, it was revealed that Kojima Productions attempted to make their game development more efficient, in terms of creating a cross platform game engine that also supports cloud-based technology.[13]

On November 29, Hideo Kojima told EGM that "I’ve always said that I want to work on original properties, but Metal Gear offers plenty of benefits. The Fox Engine, for example, took a lot of time and money [to create]; we were only able to develop it because it was intended for the next Metal Gear."[14]

In a January 19, 2013 interview with IGN, Hideo Kojima said "The new engine is built towards not only having better visual quality, but also better functionality that will allow new kinds of gaming experiences, UI, playability, etc., and that is something we at Kojima Productions are working at, and some of which will be incorporated into 'Ground Zeroes.' In terms of technology, FOX Engine is very efficient and that’s one of our focus as well. We are continually trying to make it as efficient as possible, and with it, we can develop games in much shorter time period than ever possible before."[15]

On March 12, Hideo Kojima stated “Fox Engine by itself can’t compete with engines that are being sold right now as a business,” He added “It makes our workflow as efficient as possible for our purposes. We’re focusing on things like lighting – like in the Ground Zeroes trailer, using lighting to cover for, say, a low polygon count, but still being able to achieve photorealism." “It’s possible to make many things more realistic, but that doesn’t mean you should, You have to prioritize, and that is what’s going to separate the teams that succeed and the teams that don’t.” explained Kojima.[16]

On March 21, Hideo Kojima tweeted "The concept of the ‘Fox Engine' is photo-realism." "The age of fixating on pictures and sound in games is over. Now the questions are: How free is it? Does it connect to the internet and is the gameplay smooth? Even so, a certain level of realistic atmosphere is required. " "At Kojima Productions we're aiming for a line where even simple CG models look photo-realistic when you zoom out of the game screen." Kojima followed up with a recounting of the past. "When Metal Gear Solid 1 was released in 1998, it was said that it was 'the day that [pre-rendered] movies would disappear.' We looked to the future and chose to have video sequences in the game that used polygon models instead of pre-rendered graphics. Now they make VFX movies with game engines." "With Peace Walker, we tried a hand-held system with the age of cloud technology in mind. People laughed at us then, too." He then concluded with a brief point on looking to the future. "Businessmen in the field always think ‘What platform or career is going to succeed? With whom/where should I strengthen my ties?' and look to the future and choose their path from there. But technology is always evolving, and it always leaves the laboratory and becomes a part of everyday life. Creators must look to that future when they create."[17]

Games that utilize the Fox Engine

Since mid-2011, the date Fox Engine was officially announced, various images of developing the engine on different occasions were released by Kojima Productions:

Fox Engine Demo shown at the University of South California.

An early screenshot of The Phantom Pain.

Two of the AI weapons, Peace Walker and Chrysalis, were later used in a test for the Fox Engine (the mecha were bigger than expected).

A screenshot of one of project's programmers "Lionel" and his avatar, made in about an hour of fiddling.

Job listings for the next MGS.

Which is rendered in the Fox Engine, A or B?

The correct answer is B. As the company explains, the engine doesn't use pre-calculated lightmaps to determine how static objects will reflect the light around them, but instead uses a physics-based lighting process that allows for moving objects that can be "lit so they naturally blend in with the environment."

Question of whether the images are real or generated by the Fox Engine.

Motion capture work; Fox Engine allows mo-cap sessions to be rendered in real time for preview purposes, rather than processed for later.[21]

"Very amazed to learn this "Ultimate Character Bento" tweet got around 10000RT. Maybe I shall use this as one of the item in my game lol. You may say it is waste of technology but this quality can be done in 2 hours after 3D scanning the real bento over FOX Engine."[22]

A damaged protector, which was claimed broken due to a particulary dangerous stunt.

Image regarding the development of a giant set for motion acting after finishing up a round.

MGSV mocap work. According to Hideo Kojima's Twitter account, it was meant for a "murder scene" in the game. The same murder scene was revealed in the Nuclear trailer a few years later. 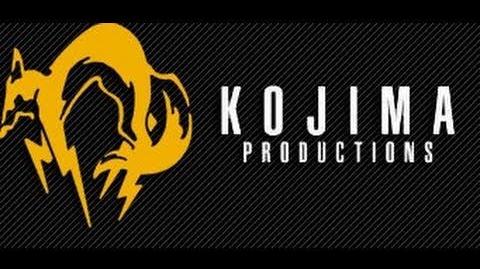 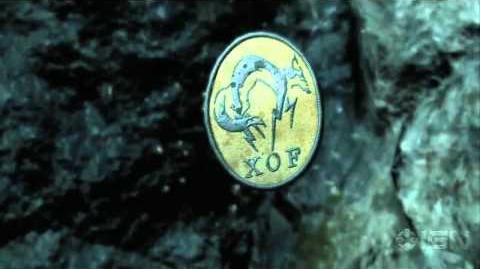 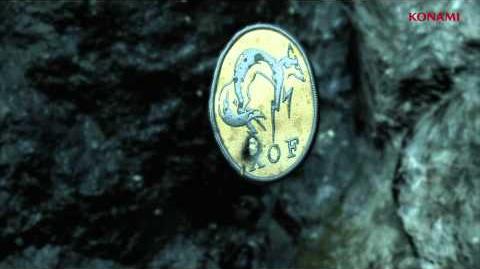 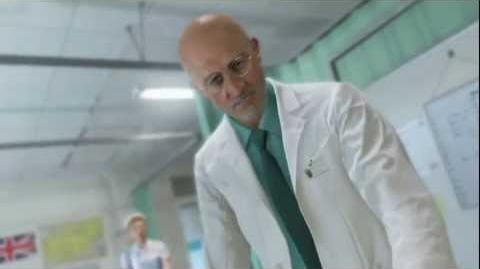 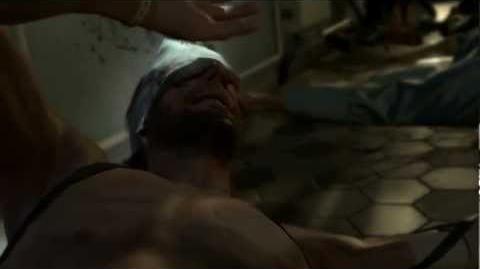 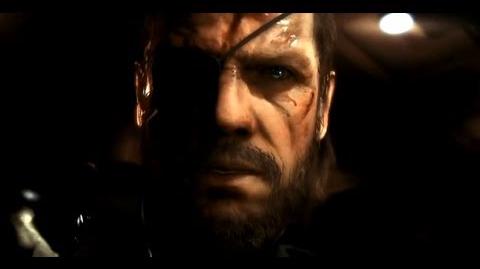 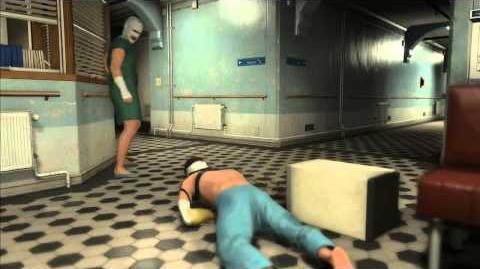 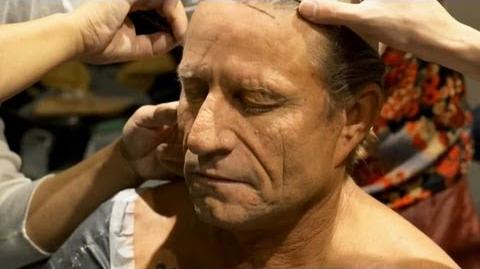