Fatman was a member of Dead Cell and a highly trained expert in bomb making. Along with Vamp and Fortune, he was one of the three remaining members of Dead Cell who participated in the armed takeover of the Big Shell offshore cleanup facility in 2009. Fatman was named after the atomic bomb used to destroy Nagasaki in World War II.

Fatman was interested in explosives from a young age. Neglected by his parents, he often hung around his father's clock store, quickly developing an obsessive fascination with all things mechanical and time as well. He eventually managed to build an atomic bomb at ten years old thanks to finding a guidebook on the Internet. After building the atomic bomb, he aimed for a career relating to bombs. He earned some fame for building an atomic bomb at the age he was at within the trade of bomb creation/disposal but he was near-universally hated by everyone at his school, which evidently resulted in his wanting fame. At best, the only thing he amounted to at his school was occasionally bringing a gun into it.

At some point later in his life, Fatman transferred to Indian Head, where he was trained by former NYPD Bomb Squad expert Peter Stillman, as well as excelling in unprecedently high marks in Indian Head and absorbed all information about building bombs. Stillman had passed on all his knowledge to Fatman, hoping that he would use it to help others and aid society in general. Stillman treated Fatman like his own son. Nevertheless, he rejected rules and grew to loath his mentor. His mad behavior eventually lost him a job at NEST.

Fatman later joined Dead Cell as their bomb expert and helped construct bombs that were used to simulate terrorist attacks to train the military and other government organizations. He was said to have kept his hands as soft and smooth as a woman's and either spent his time admiring his hands or giving them manicures, never able to keep them still. If he even had a bit of extra spare time, he'd spend it disassembling and reassembling his Glock 18 over and over again. He also seemed to enjoy riding around on inline skates.

Despite his membership to Dead Cell, Fatman had absolutely no loyalty to the group or to their leader, Colonel Jackson. Also, after the liquidation of Dead Cell, he felt absolutely no pity or sadness at the near destruction of his unit and in fact was actually glad at its destruction, as he felt free to become the emperor of explosives.

Fatman lent his hand in the taking over of the Big Shell facility after Dead Cell went renegade and joined the Sons of Liberty. He planted a series of bombs on each of Big Shell's struts, which were used to distract anyone trying to dismantle the main bombs in the core sections of Big Shell.

Fatman's mentor, Peter Stillman was brought in by SEAL Team 10 in order to lend a hand in the bomb disposal. Together with Raiden and Solid Snake [going by the name Iroquois Pliskin, he was quickly able to disarm supposedly all of the C4 placed around the facility. However, Fatman had actually outsmarted Stillman, using smaller bombs as a decoy for larger, undetectable ones. He had also programmed the larger C4 bombs to activate after all of the "baby C4s" had been deactivated. Although Raiden disarmed one of the two bombs, the other exploded as planned, heavily damaging one of Big Shell's struts, flooding the second central core resulting in the death of Stillman.

Fatman later encountered Raiden atop the heliport on Strut E. When Raiden confronted him about the terrorists' supposed ransom demands, Fatman expressed ignorance, the former having been deliberately misinformed to by his C.O., the Colonel. After neutralizing Fatman's bombs scattered around the heliport area and engaging Fatman in a vicious battle, Raiden defeated him. Fatman received a fatal wound that resulted in external bleeding, causing him to complain that he had "nothing to wear for the party," as if reacting to a stain on an expensive suit. Before dying, he activated a remote detonator and revealed to Raiden that one last bomb remained that was powerful enough to blow away the entire Big Shell once it detonated. He explained that it couldn't be deactivated even if Raiden destroyed the detonator and refused to give away its location, though he assured Raiden that it was close by. Fatman's death did not bother him, as, in his eyes, he was now a legend for having killed Stillman. He also implied that the Patriots would be happy with the results. As it turned out, Fatman had hidden the final bomb beneath his body, and once it was defused by Raiden, his threat was eliminated.

Following Fatman's death, the Sons of Liberty began to suspect that he may have been planted by the Patriots, though Dead Cell initially believed that he had merely become a stereotypical mad bomber. Revolver Ocelot later revealed that Fatman was indeed an agent of the Patriots, designed to test Raiden's abilities as part of the S3 Plan, in order to determine whether or not the program would produce valid data. He had only agreed to take part for the opportunity to kill his mentor.

Fatman was highly intelligent, though he was lacking in common sense. His intelligence was best highlighted by his creating an atomic bomb at age 10 just from a guidebook, as well as his graduating among the top of the class from NAVESCO at Indian Head, which Stillman commented had a lot of people dropping out due to the courses being "hellish." In addition, he also had traits of a psychopath, taking joy in destruction, laughing maniacally on random occasions as well as being quick to anger. He took pride in some of his more heinous actions, proclaiming that he was both "the greatest humanity has to offer and the lowest," the latter part having a hint of a thrill when saying it. It is implied that most of his behavior stemmed from his parents' neglect, as well as being shunned by his peers in high school, and was also amplified with the liquidation of Dead Cell.

Fatman was also narcissistic, often comparing his actions to art and becoming deeply enraged when anyone criticized him. In one particular instance, he threw his wine glass to the ground hard enough to completely shatter it in rage after being insulted.[1] In his attempts to create a unique modus operandi, Fatman's explosives all carried the scent of his signature cologne (save for the large one at the bottom of Big Shell's Strut A and the one that killed Stillman in Strut H). Testament to his love of manicures, Fatman sported pink fingernails during his fight with Raiden on the Big Shell. He also wore small, diamond earrings, and also had a quite noticeable New Yorker accent.

Fatman had issues with authority and preferred to play by his own rules. He held contempt for his former mentor Peter Stillman, despite the fact that Stillman treated him like a son, and how some of his actions cost him his job within NEST. Additionally, he was resistant to cooperation with the Patriots, until he relented in exchange for the chance to surpass Stillman. During the Big Shell Incident, Fatman eventually became so uncontrollable that he no longer played by even his own rules, as Stillman discovered when he found out that the C4 packages didn't carry the signature scent of Fatman's cologne. Fatman displayed his sadistic side when taking joy in the death of Stillman and his activation of a large C4 package that would result in countless deaths via the Big Shell's destruction. Fatman was also willing to put his allies in harm's way to achieve his goals, as evidenced by his planting a baby C4 explosive onto a Gurlukovich mercenary stationed on Shell 2, planting a C4 explosive onto Solidus Snake's Harrier, and his setting explosives onto Strut E to lure Raiden to the heliport, despite it potentially undoing his fellow Dead Cell team members' hard work.

Fatman was known for his intimate knowledge of creating bombs. While under Peter Stillman's training, he received unprecedented high marks for the trade, and built an atomic bomb at age 10 from the use of a guidebook he found on the internet.

Due to the nature of his trade, Fatman wore a bomb blast suit that included a laminated ballistic insert to protect his head and body from injury, and a protector plate on his back that would ease the impact on his spine if knocked down by an explosion. He also wore a cooling system underneath the bomb blast suit to alleviate any chance at overheating if wearing the suit for prolonged periods of time. The fact that he was capable of rollerblading around while wearing the suit (which overall would exceed fifty kilograms) indicated that he had considerable agility, although he could still lose his balance if impacted by an object.

Fatman used the Glock 18, the machine pistol variant of the Glock 17 used by the NYPD. He obsessively kept it clean, and often assembled and disassembled it repeatedly to keep his hands busy.

Fatman once had a child arch nemesis, "Little Boy," whom he later killed.[3] Like Fatman, he was named after one of the atomic bombs used in World War II; in this case, the Uranium bomb dropped on Hiroshima.

Fatman (ファットマン, Fattoman?) is a character who appears in Metal Gear Solid 2: Sons of Liberty, where he is fought by the player during a boss battle. He also appears in the non-canonical Snake Tales, A Wrongdoing, in which he had been responsible for the death of Richard Ames's sister in a church bombing. He was also mentioned in A Wrongdoing to have been a former and disgraced Navy SEAL. Fatman's design was admitted by Yoji Shinkawa to be the most difficult to create of the Metal Gear Solid 2 characters, as he was to make him both obese and good-looking at the same time.[4]

The Metal Gear Solid 4 Database erroneously claimed that Fatman was hired on without any knowledge of the Patriots' existence even though he strongly implies their involvement several times while talking to Raiden.[5]

During the boss battle in Metal Gear Solid 2, the player can knock Fatman to the ground by shooting his bomb blast suit three times with a lethal firearm. This can also be done by hitting him three times in close quarters battle. Fatman can then be shot in the head while he is vulnerable, either for additional damage, or additional stamina depletion, depending on the weapon used. If the player managed to kill Fatman non-lethally, shortly after his death scream, it pans away from the Heliport where Fatman is heard still skating before crashing.

After the battle, the player can move Fatman's body around, exposing the location of the last C4 explosive, and will drop Peter Stillman's dog tags when he is placed back down. Due to Fatman's weight, Raiden can only move his body for a few seconds.

Defeating Fatman in the HD Collection version will result in the player unlocking the achievement/trophy "Party's Over", a paraphrase of Raiden's retort to Fatman's lamenting that "[Fatman will] be late for the party" after Raiden mortally wounds him.

Fatman also appeared in Versus Battle. 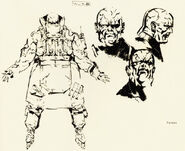