Dwarf Gekko, commonly known as Tripods and Scarabs, were small, unmanned weapons that guard important areas and were used for reconnaissance. They were used most often by Liquid Ocelot and his mercenary forces.

Dwarf Gekko were small, black spheres - about 1/3 as tall as the average man - with a large, blue "eye" and three organic-looking arms, similar to Screaming Mantis' additional arms. Their main methods of locomotion were to roll around in their spherical form, or use their three arms to hop about and run in a limited fashion. While one or a few were easily defeated, the Dwarf Gekko often attacked in large groups, where they showed their true deadly potential. Scanning any areas they were guarding with a beam of light, if they detect an intruder, an alert was raised, causing an infinite amount of Dwarf Gekko reinforcements to converge en masse upon an enemy. Besides rolling into or swiping at their enemies to cause injury, they were capable of latching onto them and inducing a painful, electric shock with their central "eye." They detonated when destroyed, making it dangerous for enemies to be nearby when taking them on. Sometimes, they could even self-destruct by clinging onto someone, ensuring that their enemy dies. They also had the ability to latch onto walls and work like a security camera, and if they were too far away to engage in hand-to-hand combat, they used their human-shaped hands to operate a number of handguns, most commonly the GSR, the Five-seveN handgun and sometimes a Desert Eagle.

Other than combat-related duties, Dwarf Gekko were also somewhat efficient in disguising themselves, with three Dwarf Gekko being enough to, after donning a fedora and a trenchcoat, pass for another person, as evidenced with their use in Eastern Europe.

In addition, they could also act as a digital-optical output mounted proxy (DOOMP) for soldiers should they be activated and/or reprogrammed to be controlled remotely by cyborgs. They also contained a USB port by 2018 in case they had to retrieve data remotely as a DOOMP.

The Dwarf Gekko were designed for combat in and to infiltrate compact spaces, as full Gekko were incapable of doing so as discovered by their increased deployment into urban counterterrorism operations. This ability was the primary reason for their name of Dwarf Gekko. The Gekko itself can act as the Dwarf Gekko mothership. During the height of the war economy, the Dwarf Gekko underwent field testing, and as such, was considered top secret to non-military/PMC personnel, although rumors nonetheless circulated among military analysts.

In 2014, Dwarf Gekko were briefly seen by Solid Snake in the Middle East, attached to the "head" of a Gekko.

Three Dwarf Gekko later appeared in Eastern Europe, disguising themselves by stacking on top of one another and donning a trenchcoat and fedora. They spied on Snake as he followed a Resistance member to Big Mama's hideout, but they were eventually discovered and destroyed by the latter. As Snake and Big Mama entered the sewers, another Dwarf Gekko spotted them and alerted Liquid Ocelot of their presence.

When Liquid returned to Shadow Moses Island to steal Metal Gear REX's rail gun, he had the Werewolf PMC deploy a large number of Dwarf Gekko in the area, knowing that Snake would soon come to stop him. They constantly scanned and guarded most of the indoor areas of the abandoned disposal facility, accompanied by several Gekko. Around this time, Nastasha Romanenko supplied Otacon with some information on the Dwarf Gekko, which he later relayed to Snake.

Dwarf Gekko later appeared in the missile hangar of Outer Haven, attacking in three large waves as Solid Snake made his way across the walkways towards GW's server room. When he arrived there, numerous hidden Dwarf Gekko revealed themselves and nearly overwhelmed Snake before they were deactivated by FOXALIVE.[2]

Despite FOXALIVE taking down the Patriots' AI network, the Dwarf Gekko still continued to see use. When they had initially been developed, cyborgs were still not commonly known, especially when the Patriots were still around, and as such they were somewhat weak against cyborgs.

However, by the time of the late 2010s, in large part because of cyborg development, the Dwarf Gekko's designs were improved to take into account cyborg combat: specifically, their weapons systems and armor utilized CNT musclefiber, and they were also capable of leeching MCFC fuel cells from cyborgs until they detonate after consuming enough MCFC fuel.

Several were later utilized by the PMC Desperado, with one of its captains, Mistral, also being capable of merging various Scarab arms to herself. However, at least one ended up being reprogrammed by the PMC Maverick agent, Raiden, during his mission as a means to scout and/or dispatch his enemies remotely. Several Gekkos also accompanied Mistral in her fight against Raiden. There was also a variant that acted as conjoined twins, called a Humanoid Dwarf Gekko in reference to their overall humanoid shape.

Although Dwarf Gekko (仔月光 Ko gekkō) made appearances in Act 1 and Act 3, they are not actually encounterable by the player until Act 4.

When confronting Dwarf Gekko in combat, the best resort is to use grenade launchers and machine-guns at a distance, shotguns at close combat, or simply to rush through them with forward rolls. Tranquilizers do not knock them out, rather they become disabled for a short period of time before getting back up, making tranqs less useful against them. Despite their great numbers, they possess one notable weakness that a patient adversary can exploit: unlike the larger Gekko, their scanning beam is easily thwarted by inanimate substances. An intruder who remains immobile inside a metal drum, or even a cardboard box, will effectively be invisible to a Dwarf Gekko. However, if the player lies in wait at one of its patrol routes even using metal drums or cardboard box, they will discover the player thus triggering an Alert. If a Dwarf Gekko is destroyed, the place will go into caution even if they didn't detect Snake.

Chaff grenades are highly effective against Dwarf Gekko, as any units in the vicinity will be stunned for a period of time, giving Snake the chance to destroy them or find a hiding spot. It would not trigger a caution after the effect wears off and will allow for their weapons being dropped, allowing for an easy time getting Drebin Points as the explosion caused by conventional means make the weapon fly off in a random direction. Also, the stealth camouflage is useless against Dwarf Gekko, as they use thermal scanners to detect their targets.

In Act 5, Dwarf Gekko spawn indefinitely on the walkways within Outer Haven's missile hangar, after Snake leaves Meryl Silverburgh to deal with the Haven Troopers. This can be useful for achieving a large amount of Drebin Points as the Gekko can be destroyed with relative ease (using a large magazine machinegun will make this easier still).

In the Werewolf TV spot, around the point where the narrator states "Perfecting the world through conquest of technology. Protecting civilian contingent through strategic combat solutions.", tiny nanobots resembling Dwarf Gekkos could be seen crawling through the infrastructure, with the only difference being that there were four orbs fused together for one of them, and several had insectoid legs rather than human-like arms.

The TGS demonstration of Metal Gear Solid: Rising has a Dwarf Gekko appear at one point. They perform acts such as spinning watermelons, juggling bowling pins, or balancing their own kind, and when defeated, will applaud Raiden. This particular model is known as the Kogekko.[3]

The Dwarf Gekko were not seen in promotional material for Metal Gear Rising: Revengeance until the TGS 2012 trailer. While they are confirmed to be enemies, the trailer has also shown that Raiden can capture at least one and turn it over to his side by attaching a cable to his neck and reprogramming it, making it scout and attack as well. One of the Desperado cyborgs, Mistral, has the ability to attach multiple Dwarf Gekko arms onto herself. When the player gets hit by Mistral, the Dwarf Gekko will either applaud Mistral or laugh at Raiden.

During the Mistral battle, Dwarf Gekko will spawn indefinitely. Since Dwarf Gekko occasionally drop kits to restore some life and completely restore the FC gauge, and that kills count toward BP, theoretically it's possible to gather an unlimited amount of BP and stay alive while doing so, since Mistral's attacks are typically avoidable. This is very useful in attempting to gain BP for items such as the skins, weapons, and enhancements. Having a weapon such as the Fox Blade or Murasma will make the process much easier. The same occurs with the AI Mistral encountered later.

Chopping off the upper arm of a Dwarf Gekko in Blade Mode will result in it briefly pausing in confusion as it searches for its missing limb, followed by the robot charging at Raiden and exploding on contact.

The Dwarf Gekkos were used as a chair for Mistral in the Blade Wolf DLC. They can be heard saying things like "HOLD HER!" some of them even made wailing sounds similar to crying and straining because they were having trouble supporting her (most cyborgs weigh 300+ pounds).

Two special edition figurines of Dwarf Gekko were released to various members of the development staff to commemorate the game's release. They were given the colors yellow for Kojima Productions, and silver for Platinum Games. They would later be issued for sale.

Dwarf Gekko later appeared in the Versus Battle page of the official Metal Gear Solid website, where they fought against the Cyborg Soldiers. The Dwarf Gekko stats noted that they were reconfigurable, relentless, and resourceful, but were only intended for guard duty and reconnaissance. 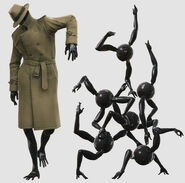 CG models of Dwarf Gekko, with three units having adopted a disguise (left).

A Dwarf Gekko knocking Snake back.

A Dwarf Gekko latching itself onto Snake.

A horde of Dwarf Gekko.

Shinkawa statue of a Dwarf Gekko.

Raiden about to reprogram a Dwarf Gekko.

Raiden's Dwarf Gekko fighting a Desperado soldier, with the Gekko getting kicked.

Raiden's Dwarf Gekko about to shock an unsuspecting Desperado soldier.