Decoy Octopus was a member of FOXHOUND that specialized in impersonation. His disguises were so thorough that he would even inject the blood of those he impersonated into his own body. Along with the rest of his unit, he went rogue during the Shadow Moses Incident in 2005.

Decoy Octopus was originally from Mexico.[1] Prior to February 2005, he was recruited into the U.S. Special Forces Unit FOXHOUND and served under squad leader Liquid Snake. Octopus was a master of disguise, copying his targets physical appearance, mannerism, and even their own personal DNA, going so far as to drain their blood and inject it into himself.[3]

In February 2005, Octopus and the other members of FOXHOUND staged a revolt against the U.S. government on Shadow Moses Island, taking DARPA Chief Donald Anderson and ArmsTech President Kenneth Baker as hostages. After fellow FOXHOUND member Revolver Ocelot tortured Anderson to death, Octopus disguised himself as the DARPA Chief and drained the man's blood, as part of FOXHOUND's plan to access the island's nuclear weapons.[4][5]

Disguised as Anderson, Octopus awaited rescue by ex-special forces agent Solid Snake. After Snake gained access to his holding cell, Octopus revealed to him that the terrorists had captured the nuclear-armed Metal Gear REX, and that they needed two detonation codes to activate it.[6][7] He lied to Snake, saying that the terrorists had successfully obtained Anderson's code, and that they only required President Baker's code to launch REX.[7] The misinformation was intended to trick Snake into arming REX via the PAL system, which FOXHOUND were unable to access.[4]

During this time, Octopus had unknowingly become infected by the FOXDIE virus, for which the Pentagon had secretly used Snake as a vector.[8] As Octopus tried to glean further information from Snake regarding the PAL system and whether the White House or Pentagon would give in to FOXHOUND's demands, he suddenly succumbed to FOXDIE and suffered a heart attack, dying at Snake's feet.[9]

The former occupant of the adjoining cell, Meryl Silverburgh, initially mistook Octopus for the DARPA Chief, and held Snake at gunpoint shortly after Octopus' death, believing Snake had murdered him.[10]

Octopus's death from a heart attack, triggered by the FOXDIE virus, was later recreated for the S3 Plan via Richard Ames, whose pacemaker was shut down by the Patriots during the Big Shell Incident.

Laughing Octopus of the Beauty and the Beast Unit utilized the name and talent of Decoy Octopus during the Guns of the Patriots Incident, achieving her own mimicry through OctoCamo technology.

Described as a "master of disguise", Decoy Octopus would alter his appearance and voice to perfectly match that of the subject he was impersonating, going as far as to take their blood into his body. In his normal appearance, he lacked ears and possessed a flattened nose. According to Revolver Ocelot, Octopus was among the older members of FOXHOUND under Liquid Snake's command.[11]

Born in Mexico, Decoy Octopus became a successful actor and SFX artist after moving to Hollywood.[12][13] He was later recruited by the CIA for his exceptional skills in mimicry, where he was assigned to impersonate government VIPs on top secret missions. It was through his service with the CIA that he came into contact with FOXHOUND.[12]

Octopus was fluent in a dozen languages.[13] At least some of these languages were French, German, Spanish, and included varieties such as Black Vernacular English.[12] To aid his disguises, he shaved down his cheekbones, jaw, and nasal bones, cut off his ears, and possessed computerized vocal enhancement implants.[12] Octopus also took steroids, changing his physique and metabolism, and received bone marrow transplants to change his blood type.[12] To avoid becoming confused as to his own identity, due his extreme methods, he requested that the military give him a full mental deprogramming after each mission.[12]

Octopus gained his nickname due to his ability to contort his body and dislocate his joints, allowing him to adopt any manner of walk he chose and to navigate through narrow spaces, respectively.[12] The name also derived from his mastery over his sense of touch, giving him exceptional grip strength and a high tolerance for temperature extremes.[12]

Decoy Octopus (デコイ・オクトパス, Dekoi Okutopasu?) appears in Metal Gear Solid, although his normal appearance is only partially visible during a flashback sequence (excluding the profile images in the briefing videos). His actual voice is never heard and his background is never revealed in the game. Octopus is the only member of FOXHOUND who does not serve as a boss character, and his body does not possess a collectible dog tag in the remake Metal Gear Solid: The Twin Snakes.

Mexico is identified as Octopus's place of birth in the Metal Gear Solid: Official Mission Handbook, published by Millennium Books. A Mexican origin was later confirmed by the description on the Decoy Octopus character card in Metal Gear Acid 2, included with the MGS1 Pack.[1]

The "Ghost" of Octopus appears in Metal Gear Solid 4: Guns of the Patriots, if the player photographs the elevator in the Tank Hangar with the Camera. The image is that of his face portrait from artwork for Metal Gear Solid.

Octopus was featured in Versus Battle, where his character competed for votes against Metal Gear Mk. II.

"STRENGTHS:
Master of Disguises and Mimicry
WEAKNESSES:
FOXDIE, Lack of Combat Expertise
FEATURED FACT:
Decoy Octopus’s disguise field craft was so exceptional he even transfused the blood of his subjects and fooled Solid Snake himself
FEATURED GAME:
METAL GEAR SOLID: THE LEGACY COLLECTION"
―Decoy Octopus in Versus Battle

Hideo Kojima later reflected that he considers the circumstances surrounding Octopus to be an original approach to a boss fight, since the player expects to fight him but never does.[14]

In Metal Gear Solid V: Ground Zeroes, Octopus's death is recreated during the Déjà Vu Extra Op by a prisoner in Camp Omega. Should the player character utilize the Classic Snake skin, the prisoner will appear as Donald Anderson, Octopus's disguise. 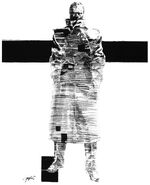 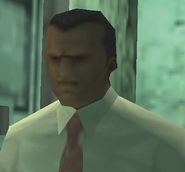 Octopus's mask is removed by Raven in Metal Gear Solid. 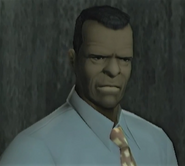 Octopus unmasked in The Twin Snakes. 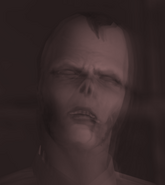