Dead Cell was a former special forces unit specialized in counter-terrorism operations that was established by U.S. President George Sears. Although the unit was officially a part of the U.S. Navy, the group answered directly to the President.

Dead Cell was first formed in the early to mid 2000s as a small government organization who would carry out surprise assaults on allied bases, such as embassies, consuls, and military installations, in order to provide anti-terrorism training for the Navy SEALs and Marine Corps. One of the earliest recruits to join Dead Cell during its formation was Vamp.

After their original leader, Colonel Jackson, died in prison, while incarcerated on charges of corruption, the group's actions became more extreme. Under the leadership of Fortune, Jackson's widow, Dead Cell were blamed for the mass murder of civilians, though this had been orchestrated by the Patriots, the shadowy organization behind American politics. As a result, Dead Cell became a rogue unit.[1]

The U.S. military became concerned by Dead Cell's activities, and on October 2008, they set in place a trap aimed at eliminating the group. Members Chinaman[2] and Old Boy,[2] were killed, leaving only Fortune, Fatman, and Vamp alive. Although Fortune and Vamp were devastated by the events, Fatman was unconcerned, as he felt free to become the "Emperor of Explosives." On April 29, 2009, the Patriots manipulated Dead Cell into joining Solidus Snake (former President Sears) and the Sons of Liberty terrorist group in the armed takeover of the Big Shell. Together they stole Arsenal Gear and its nuclear payload in order to seek revenge on the Patriots.

As part of the Patriots' S3 Plan, Dead Cell had been carefully chosen to carry out the "role" of FOXHOUND, in an elaborate recreation of the Shadow Moses Incident. Fatman appeared to betray the unit and attempt to destroy the Big Shell, ruining the Sons of Liberty's plans. In reality, he was working for the Patriots directly and had been assigned to test Raiden's progress: if the Big Shell was destroyed, the simulation would have ended. The Patriots dragged Peter Stillman into the situation in order to coax his former protege into agreement. Fortune also had an electromagnetic device planted on her, which could deflect incoming bullets, in order to convince her that she was endowed with supernatural luck.

Following Arsenal Gear's destruction, the entire team had been wiped out, except for Vamp. When Vamp, the last remnant of Dead Cell, was killed by Raiden in 2014, the unit was completely eradicated.

Dead Cell is based on the real life U.S. Navy counter-terrorist units called Red Cell. The backstory of the unit also somewhat resembles its real life counterpart, in that both Colonel Jackson and Red Cell founder Richard Marcinko were both tried and convicted of misappropriation of government funds and sent to prison, differing in that Jackson died in prison, while Marcinko did not. During production, Dead Cell was originally known as the Black Cell, and all of its members were intended to wear sunglasses.[3] The idea of the members wearing sunglasses made it as far as when the script was finalized, but it was cut before release due to the characters in The Matrix also wearing sunglasses.[4][5]

Dead Cell members adopted the use of trench coats similar to FOXHOUND.

The characters Old Boy and Chinaman were originally going to appear in Metal Gear Solid 2 as Dead Cell members, to be fought by the player, but were cut from the final version. However, the characters remain in the game's script, where they are described as having been members who died during the unit's liquidation.[2] While concept art of Chinaman exists, Old Boy makes his first and only visual appearance in the IDW comic book Metal Gear Solid: Sons of Liberty.[6]

At one point, after Raiden witnesses a man in a cardboard box crossing the strut connection bridge, he will speculate to Iroquois Pliskin that the man might have been a member of Dead Cell, as he thought it was "stupid to be seen walking around in that" and referred to him as a psycho, unaware that Pliskin, or rather, Solid Snake, had actually been the man in question.

The Dead Cell boss battle theme, known as "Yell 'Dead Cell'", appears in Super Smash Bros. Brawl as a randomly played song on the Shadow Moses Island stage or as a set track on a custom stage. The theme is also available for players' listening pleasure in the game's Sound Test mode. Although largely the same as in its original usage, it also had some extra seconds added to it.

Although Dead Cell is referred to in-game as being standins for the Sons of Big Boss from the previous game, their overall characterizations are more similar to Black Chamber, the enemy group from the non-canon game Metal Gear: Ghost Babel. This includes being willing to risk hurting multiple innocent lives to get revenge on an anonymous person/group for their tragic background due to their belief that the innocent people were just as guilty, as well as harboring a strong hatred of Solid Snake for his perceived role in their misery.

Dead Cell as a whole appeared in Versus Battle, where they fought the Cobra Unit.

According to Kojima on his twitter account, as well as the Piggyback Deluxe Metal Gear Solid V game, the Dead Cell bosses were partly inspired by "Kaijin" (怪人), which the latter source translated as "mysterious individuals". Although technically accurate in terms of it being a literal translation, the specific meaning of the word had been meant to be a reference to the monsters of the week from Japanese TV shows such as Super Sentai and Kamen Rider, which he explained in a podcast.[7] 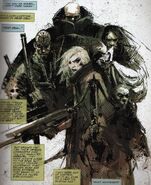 Dead Cell, as depicted in the MGS2 official comic book, including Chinaman and Old Boy.
Add a photo to this gallery

Retrieved from "https://metalgear.fandom.com/wiki/Dead_Cell?oldid=270845"
Community content is available under CC-BY-SA unless otherwise noted.