The Déjà Vu mission was an operation conducted by the Militaires Sans Frontières on July 13, 19XX, in which Big Boss infiltrated a U.S. Naval prison facility in Cuba. Big Boss's objective was to recreate the "strangely familiar" scenes shown in some mysterious photographs that had come into MSF's possession.

At 00:01, Big Boss had arrived at the facility, and was informed by Kazuhira Miller that the photographs had been uploaded to his iDroid. Big Boss then used the photographs as clues to find the locations they showed and recreate the scenes they depicted: collecting an item while avoiding searchlights on a helipad; seeing a grounded chopper being overlooked by two soldiers; driving a jeep around the base; blowing up an APC with a soldier inside by throwing grenades into the cockpit; locating a surveillance camera; finding a Moai statue; and initiating a power blackout by shutting down a generator, which caused a levitating gas-masked figure to appear. After recreating the seven scenes, Big Boss escaped the facility via a ventilation duct, and ended up having to take a quiz.

Déjà Vu is an Extra Ops mission that was initially exclusive for the PlayStation versions of Metal Gear Solid V: Ground Zeroes. It was later patched into the Xbox versions on May 1, 2014.[1] It is unlocked by collecting all the XOF patches in the main game. Déjà vu (French for "already seen") refers to the phenomenon of having the strong sensation that something currently being experienced has been experienced before in the past, regardless if it has actually happened or not.

Although some missions (notably Eliminate the Renegade Threat and Classified Intel Acquisition) can optionally have the player leave the base without using the Hind, Déjà Vu is the only mission of the seven (including its counterpart, Jamais Vu) where the player cannot be extracted via Hind to complete the mission, although they can summon it to spray off the Metal Gear Solid: Peace Walker logo for a trial completion, as well as use it for extracting captured personnel. On a related note, like the two side ops mentioned above, this mission also features two post-credits debriefings the player can access depending on how they complete the mission, not counting the end-game quiz the player needs to take. Specifically, if the player manages to complete the mission without recreating every scene (as high as six and as low as one), Miller will call an unknown contact stating that Big Boss has completed his mission, before confirming that Big Boss hasn't found all of the scenes. If the player manages to not only complete the mission after recreating every scene, but also passes the end-game quiz, Miller will comment that the player lives up to the legend and compliments him. Both times, Miller mimicks Ocelot.

If the player calls Miller while looking at the prisoner at Camp Omega and the prisoner in the Admin Building's basement via the binoculars, Miller will say "Wait a second..." and "That man..."

The cassette tape "Déjà Vu" can be found on one of the rocks near the shore. It is found in the same place with its equivalent mission, Jamais Vu. The tape contains two themes, "Encounter/Resurgence" from Metal Gear Solid, and "Theme of Tara" from Metal Gear.

Besides the aforementioned scenes that the player has to recreate from the original Metal Gear Solid on PlayStation, there are many other references to the game and other entries:

If the player completes the mission on Normal for the first time, Kazuhira Miller will mention when stating that the quiz is necessary to completing the mission that he'll throw in a special bonus if the player manages to complete the quiz, and upon the completion of the quiz, Miller will state the bonus will be given later. He says the same thing on Hard difficulty.

Two of the armories outside of the base have a black logo which says "Kojima Productions" and "Kojima Productions LA," but are otherwise blank. When near the first one, Miller will call in and question what the term "Kojima Productions" means, and think there has to be a reason there.[15] Calling him further through the binoculars will also have Miller comment that the empty oval the logo was on needed something on there,[16] as well as find the logo familiar and thinking there's a trick to exposing the hidden material.[17][18] The player has to use the searchlights on the watchtowers to "complete" the logo, yellow lights for the standard "Kojima Productions" logo, and red lights for the Los Angeles branch. Completing the standard company logo will have Miller announce "KOJIMA PRODUCTIONS." While completing the Los Angeles branch logo will have him express bemusement at the logo.[19]

However, those not directed by Hideo Kojima, will cause Miller to have trouble reading the game's title or recalling anything from them. In addition, a rifle found in the admin building's storehouse is equipped with a light that allows Big Boss to remove the Hideo Kojima-directed games' logos, similar to the removal of the XOF logos in the main game's opening, but not the others. Upon erasing all of them, Miller will confirm their disappearance, although he will also stated that the markings will "live on inside you." In addition, Hideo Kojima will thank the player "for all [their] support," alluding to a special message from Psycho Mantis when he scans the memory card in the Japanese version of Metal Gear Solid and discovers Snatcher and Policenauts save files in the card. In the Déjà Vu missions, the Metal Gear Solid 4 logo is located on a wall of a garage building, and Metal Gear Solid 2 was located on a fence.

If the tank soldier is extracted while the mission is played using the Classic Snake or Cyborg Ninja skins, he will appear in The Phantom Pain despite the mission being non-canon.

Deja Vu, alongside Jamais Vu, were mentioned in the commentary trailer for Metal Gear Survive, citing that the latter game's story is similar regarding canonicity (or lack thereof) to the two Extra Ops. 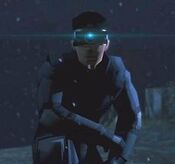