Cyborg Ninja was an alter-ego assumed by several individuals. The name is derived from the powered exoskeletons and high-frequency blades that they utilized (both which gave them ninja-like appearance and abilities), and in most cases, the replacement of their organic body parts with cybernetic ones. Many of the exoskeletons were developed by Tokugawa Heavy Industries.

Frank Jaeger, also known as Gray Fox, was a former FOXHOUND member in 1995 and Big Boss's most loyal soldier who was supposedly killed during a fistfight in a minefield with Solid Snake in 1999. His body was recovered by Dr. Clark, who fitted him with a prototype exoskeleton in order to use him as a test subject for the Genome Project. The tests also placed him under severe pain, which resulted in him being drugged for several months while experimenting on him, and the aftereffects of the experiment continued to anguish him even after breaking free of the experiments, at least once screaming for medicine. After escaping and killing Dr. Clark in 2003, he would act as the first Cyborg Ninja throughout Liquid Snake's FOXHOUND revolt in 2005. In addition, detailed records for the Cyborg Ninja project were destroyed with the lab when he broke out and escaped.[1] Nastasha Romanenko also heard stories about the project, although she didn't actually think they were true until Snake fought against Fox.

Leader of the Gurlukovich Mercenaries Olga Gurlukovich appeared as the second Cyborg Ninja during Solidus Snake's takeover outside Manhattan in 2009. Acting as a double agent working for both the Sons of Liberty and the Patriots, her role as the Ninja was to assist Raiden and contribute to the recreation of the events that occurred in 2005, as scripted by the Patriots. Though she assumed the Cyborg Ninja persona, she never received any cybernetic implants that replaced any part of her body. Although Rosemary claimed that the research notes for the Cyborg Ninja project were lost in the lab's destruction, the fact that the Ninja concept still existed implied that backups of the notes were retrieved to continue the experiments.

Raiden was granted a High-frequency blade from Olga in 2009. While undertaking a mission for Big Mama to recover the remains of Big Boss, he was captured and held in Area 51; there, as part of the Patriots' experiments, his head was completely severed from his body from the jaw down. He was fitted with a cyborg body, and left severely wounded to the point of death. He was saved by Dr. Drago Pettrovich Madnar and given artificial white blood. After he was rescued by Big Mama, he used his abilities as the Cyborg Ninja to assist Old Snake during the Guns of the Patriots Incident in 2014. Unlike the other Ninjas before him, Raiden made no secret as to his true identity. Raiden was fitted with a more-human looking Cyborg body after the mission was completed, while the original Cyborg Ninja body became a "suit" he could wear if needed, similar to Olga's cyborg ninja outfit before him.

However, after sustaining severe injuries from an attack instigated by the PMC Desperado Enforcement LLC., Raiden was outfitted with a second Cyborg Ninja body, being primarily dark in color.

Between the events of 2014 and 2018, cybernetics were widely spread. Four cyborg ninja-like mercenaries affiliated with Desperado Enforcement LLC. – Sundowner, Mistral, Monsoon, and Samuel Rodrigues – were involved in the chaotic events of 2018. Although Sundowner, Mistral, and Monsoon were full-body cyborgs, Sam possessed relatively minimal cybernetic enhancements other than in his replacement right arm.

All of the Cyborg Ninjas carried a high-frequency blade as standard issue. Gray Fox was also outfitted with an arm cannon which fired explosive energy blasts. Raiden holstered a SOCOM pistol as his sidearm. Raiden is said to use the H.F. Blade that Olga gave him, but there are some differences between the swords; Raiden's second blade had a dark gray color, and the handle of the sword was different in that there was no hilt. By 2018, he was seen using a more advanced sword with a curved blade.

Cyborg Ninjas were demonstrated to have significantly enhanced abilities such as superhuman strength, speed, agility, and endurance. Notable instances of the sheer power of these enhancements include Gray Fox holding back Metal Gear REX (2005), Raiden spinning two Gekko that latched onto him before tossing them away and single-handedly holding back a charging Outer Haven (2014), as well as lifting and throwing a Metal Gear RAY unit.

Raiden was also powerful enough to throw a new model of Metal Gear RAY in the air in 2018.

The Cyborg Ninja (サイボーグ忍者, Saibōgu Ninja?) character did not exist in the original concept for Metal Gear Solid and was an original creation by series artist Yoji Shinkawa. Hideo Kojima liked the concept so much, he decided to incorporate it into the storyline.[2] An unrelated Ninja-type character, Black Ninja, previously appeared in the preceding game, Metal Gear 2: Solid Snake.

In Kojima's Metal Gear Solid 2 Grand Game Plan, the second Cyborg Ninja was originally intended to have been a machine, before eventually being changed to Olga in the final version. In one scene, the Ninja would have altered its voice in order to taunt Solid Snake and Otacon, by mimicking Meryl Silverburgh and Sniper Wolf, respectively.[3]


Raiden is the only Cyborg Ninja in the series to survive the events of the game in which he is featured. He is also the only Ninja to have never fought Solid Snake in a main game, either during gameplay (Gray Fox) or off-screen (Olga Gurlukovich).

After completing Metal Gear Solid twice, Gray Fox's exoskeleton swaps its colors so that its red portions become gray and the gray portions become red. Also observable is the color of the "eye" changing from red to green.

Although the Cyborg Ninja has never been playable in any of the main Metal Gear Solid games, he has been featured as a playable character in the expanded versions of the games, along with other game titles:

Concept artwork for Gray Fox from MGS and Raiden from MGR both appeared in Versus Battle, where they fought each other.

"STRENGTHS:
Half Man, Half Machine, All Art
WEAKNESSES:
Paper can be Ripped to Shreds
FEATURED FACT:
Both ninja cyborgs and true art can be defined as much by what’s not there as what is

Concept art of Gray Fox as the Cyborg Ninja. 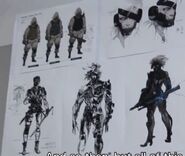