Curry is a type of spiced dish that is derived from India or other South Asian countries.

Originally an Indian dish, it was prepared with meat, vegetables, and other ingredients cooked in spices. It made its way into Great Britain around the 16th century. It was later adopted into the British Navy due to its nutritious nature as well as being capable of being preserved. During World War II in the early 20th century, Japan developed curry as rations for its Navy. Upon returning, it eventually found its way to Japanese homes and was formally adopted into the Japan Self-Defense Forces. The dish is most popular as a simple to cook yet widely adaptable savory and aromatic comfort food.

During the Peace Walker Incident in 1974, the mercenary group Militaires Sans Frontières procured various curry recipes. The MSF then developed a spicy curry dish for its soldiers, which was sealed in specially manufactured retort pouches. The development of the retort pouches were not easy, as their only reference during development were the vacuum-sealed sausage rations used by the United States military at the time of the mission, with the temperature and the pressure adjustments also requiring a lot of trial and error before successful development. The result was a type of ration using retort pouches comparable to those used to store space-food, and required three minutes to boil it in water before eating. Big Boss, when learning of this from Miller, was impressed at how they were able to develop it.[1]

The group's R&D Team later added more spice to the dish to create "Great Curry," which had a flavor more closely related to freshly cooked curry. They later made the curry 95% fat free and made it even more spicy to create "Future Curry," which as the name implies, went "far beyond" freshly cooked curry. Each variant of curry, overall belonging to the Legendary Taste series, had 1 serving as well as 434 grams per serving.[2]

Curry appears in one of Iroquois Pliskin's VR Missions, Variety Level 01, featured in Metal Gear Solid 2: Substance. The mission requires the player to take down seven enemy soldiers with the PSG1, to stop them from approaching a curry dish that has been left in the open. Should the player fail, the soldier who reaches the dish will react in an identical manner to encountering a Book, and the mission will result in a Game Over.

The Yellow Genome Soldier in Metal Gear Solid: Portable Ops Plus is mentioned to enjoy curry.

In Super Smash Bros. Brawl, one of the weapons that the player can utilize against other fighters is the Superspicy Curry, which has the fighters spraying fireballs until they grow adjusted to the flavor. The trophy description also alludes to Solid Snake eating it. The description erroneously mentioned that it debuted in Kirby's Adventure, when in reality, it debuted in Kirby's Dream Land. It returned in Super Smash Bros. Ultimate with the same function as in Brawl.

"The spiciest curry around. Eat it, and you'll be able to attack by spitting out fireballs. The eater of the curry will soon be unable to handle the heat, however, and end up frantically dashing about the screen. This is a pretty funny sight that never gets old, especially when it's Samus or Snake. Eat this mouth-scorching dish if you dare.
NES Kirby's Adventure"
―Superspicy Curry Trophy description from Super Smash Bros. Brawl

In the Japanese version of Metal Gear Solid: Peace Walker, the various levels of curry (Spicy Curry, Great Curry, and Future Curry) were actually Bon Curry, Bon Curry Gold 21, and Bon Curry Neo, respectively, added in by Hideo Kojima as a joke in regards to product placement.[3] There was also a briefing file where Big Boss and Miller talked about the Bon Curry, but it was removed in the overseas versions, presumably due to copyright issues.[4] The briefing file implied that the name "Bon Curry" was named by Miller after Cécile Cosima Caminades regarding her French nationality, due to "Bon" being the French word for "good."[5] A similar tape, relating to Retort Pouched curries in itself, and likewise occurring before the Bon Curry tape, was also removed, presumably for the same reason as the Bon Curry tape itself.[1] Similarly, the various Curry in the Japanese version shared the exact same flavor text in the basic menu description, while the overseas versions had each Curry being given a slightly more unique description for each version. For their model viewer descriptions, it was the opposite: The English versions, besides slight alterations, had the same overall description, while in Japan, each model viewer description for the item was completely unique.

Humorously, the Curry items were given an indirect mention during one of the briefing conversations when Miller suggests dispatching several MSF members to other countries, when Big Boss sarcastically asks if he is going to make MSF-brand rations, with Miller briefly considering it to be a good idea.[6]

Each of the three Curry items in the game restores LIFE when used, and if equipped, will automatically be used should the LIFE gauge become depleted.

When preparing to face the most difficult enemies in battle such as Custom AIs or Gear Rex, it is recommended to place Curry (preferably Future Curry) in an Items slot, in addition to standard Rations, for prolonged survival. 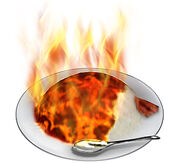 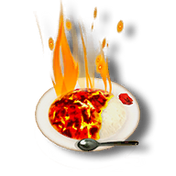 Superspicy Curry in Super Smash Bros. Ultimate.
Add a photo to this gallery

Retrieved from "https://metalgear.fandom.com/wiki/Curry?oldid=272060"
Community content is available under CC-BY-SA unless otherwise noted.