Crocodile Cap is a cap shaped like a crocodile head that can be used as camouflage.

The Crocodile Cap appears in Metal Gear Solid 3: Snake Eater. It is located in Chyornyj Prud and weighs 1.6 kg when placed in the player character's inventory.

The player must enter the water and stay to the left. There will be a log that can be swum under. To get to the ledge, the player must climb a tree and use ropes to navigate down into a hidden clearing. The Crocodile Cap is located there.

While the cap is equipped, guard dogs will refrain from approaching Snake, and Snake can be mistaken for a crocodile when in water and mostly submerged, such as in Ponizovje South, when swimming the aqueduct. Also, if peeking around a corner with guards nearby while wearing it and crawling, the guards will flee in terror as they'll think a real Crocodile is lurking nearby. Wearing the Crocodile Cap during the Ocelot battle will cause the soldiers to mock Snake. If Snake wears the Crocodile Cap while fighting The End, the latter character will briefly mistake him for a Crocodile and ignore him.

If Snake tries to contact any of his support group while wearing the mask, most of the group will actually compliment Snake for using an ingenious disguise, much to Snake's chagrin (he was hoping that he'd receive a "normal" reaction from them [i.e. either laugh or react with surprise at his even wearing the cap]). However, EVA will give a "normal" reaction when he contacts her while wearing it. Also, Sigint will compare the cap's use to rumors of the OSS using cow suits during World War II to fool the Germans in a similar manner, where they would hide among actual cow herds to observe the enemy units if called on it.[1]

The Crocodile Cap (implied to be the same one as the one worn by Naked Snake during Operation Snake Eater) was also available in the MEME Expansion for Metal Gear Online as bonus equipment.

A more realistic version of the Crocodile Cap can be found in Metal Gear Online 3. In addition, a Crocodile Cap from the Snake Eater era is an unlockable equipment in the Event Episode "The Encounter: Begin 1964 Event!", requiring 1000 Battle Points to unlock. 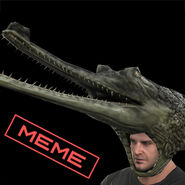 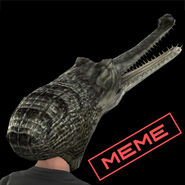 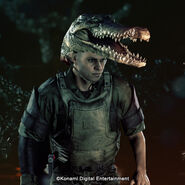