Cigarettes are rolls of fine cut tobacco leaves wrapped in a cylinder of thin paper for smoking.

Cigarettes are made from the dried leaves of tobacco plants, which contain the alkaloid drug known as nicotine. They are enjoyed via the inhalation of the smoke that is produced when lit. As a result, the nicotine enters the bloodstream where it stimulates the central nervous system and brain. One variant of cigarette, called "bent cigarettes", can be lit by bending them, which is useful if someone doesn't have a lighter on them.

Though Amanda Valenciano Libre preferred to smoke cigarettes, she accepted a cigar from Big Boss after he rescued her unit in Rio del Jade, Costa Rica. Big Boss later helped her roll a cigarette while tending to wounds she sustained while fighting Chrysalis. Amanda chain smoked cigarettes due to a fear of mosquitoes that she developed after surviving a potentially bad case of malaria. Her brother Chico, was also a smoker, although Big Boss made him promise to quit while recruiting him into the Militaires Sans Frontières, in order to redeem himself for endangering his comrades under torture.

Huey Emmerich formerly smoked cigarettes, although he wasn't allowed to while working in the labs for the Peace Sentinel, since the smoke and tar would ruin the precision equipment. He instead developed an electronic cigarette to bypass this, which expelled vapor rather than smoke. Cécile Cosima Caminades preferred to smoke unfiltered French cigarettes. Although MSF subcommander Kazuhira Miller was not known to have smoked tobacco himself, he did previously sell cigarettes to U.S. soldiers in Japan at ten years of age, eventually running the small shop himself after his mother fell ill.

KGB agent Vladimir Zadornov used to smoke cigarettes, although he quit prior to the events of the Peace Walker Incident due to it "ruining his lungs." The forefinger of his prosthetic hand was equipped with a lighter, that was originally meant to allow him to smoke.[1]

The Arms dealer who visited Nova Braga was a smoker, as evidenced by his intel photo during a briefing among Diamond Dogs, where he smoked a cigarette while meeting with a CFA soldier on what was presumably business-related matters.

Soviet soldiers in Afghanistan as well as soldiers belonging to the Private Forces Contract Forces of Africa, Zero Risk Security, and Rogue Coyote in the Angola-Zaire border region were seen smoking cigarettes while relaxed and guarding the base a few times.

A pack of cigarettes and a scope were Snake's only belongings upon his arrival on Shadow Moses Island in 2005. He was able to smuggle them in his stomach, since Naomi Hunter's earlier shot had suppressed his stomach acids. During his infiltration, he smoked a brand of cigarettes called Moslems, which were designed to cut down on second-hand smoke, and were at the time considered his favorite brand.[2] To locate infrared sensors Snake had to blow the smoke over them.

During the Tanker and Big Shell Incidents, Solid Snake continued to smoke cigarettes. During the former event, he disposed of a lit cigarette over the George Washington Bridge shortly before infiltrating the dummy tanker USS Discovery, for which Otacon berated him, although he also kept them on him as a "good luck charm." In the latter event, he supplied the cigarettes to Raiden in case he needed them.[3] Although Raiden himself said he didn't smoke, he later admitted that he had briefly, although he had quit some time prior to the mission.[3][4][5]

During the events of the Guns of the Patriots Incident, Solid Snake smoked The Boss brand of cigarettes, which were filtered[6] hand-rolled cigarettes containing 16mm of tar. He stored them in a small box and stubbed them out in a portable ashtray. A few times, Snake would also smoke them on the Nomad, even when smoking was not allowed on the plane. During his mission in South America, Drebin 893's pet monkey, Little Gray, became addicted to cigarettes, after snatching one of Snake's lit cigarettes. Although Drebin initially refused to allow Snake to give Little Gray another after the latter beckoned for one, he eventually relented by the time Snake, Meryl Silverburgh, and Johnny Sasaki infiltrated Outer Haven. Snake later quit smoking after the events of the insurrection, as one of his first steps to fulfilling Big Boss's final wish to Snake.

The Cigarettes are a recurring item in the Metal Gear series. In various games and media, with the exception of Super Smash Bros. Brawl (due to the slightly younger audience base for that game) and Metal Gear Solid Mobile, usually depict Snake as smoking cigarettes. However, in the Worlds of Power book adaptation, Snake was not a smoker, and refused to procure cigarettes due to fears of them being a trap, and also deciding "they're deadly enough on their own" even if they weren't actually poisoned. Most of the supporting characters in the series often chastise Solid Snake for smoking, with only Nastasha Romanenko and Rosemary in Metal Gear Solid and Metal Gear Solid 4, respectively, not minding too much, other than giving a general warning about the health effects (and in the case of Rosemary, possible detection from the enemy).[8][9]

In the original MSX2 version of Metal Gear, the Cigarettes serve no purpose for the vast majority of the game. They are only useful during the game's ending, as equipping them will grant the player more time to escape Outer Heaven, by slowing down the timer countdown of the self-destruct sequence. In the re-released versions, however, the ability to detect infrared sensors was added, as well as the slow depletion of the Life Gauge, which was first featured in later games of the series. While the negative health effects of using the Cigarettes were not included in the original version, the game's manual does mention the General Surgeon's Warning in its description of the item. The image in game's manual depicts them as the American brand Lucky Strike, which is owned by British-American Tobacco.

Like its predecessor, Metal Gear 2: Solid Snake also features the Cigarettes, though this time it is required on one occasion, in order to hang glide from the Tower Building by calming Snake's nerves. The game's original manual identifies the brand as Lucky Striker (ラッキー・ストライカー, Rakkī Sutoraikā?), and the in-game icon resembles the packaging of the real-world brand Lucky Strike, though the brand name and icon was were omitted and altered, respectively, in the re-released versions. Again, like the original Metal Gear, the re-released versions feature the depleting Life Gauge effect of the Cigarettes when they are equipped, which was not present in the original MSX2 version. In one of the game's opening cutscenes, a pack of cigarettes can be seen amongst some military equipment: in the original version, the brand is identified as "Bal Mal," whose name and pack design is based on that of the real life Pall Mall brand; in the re-released versions, the name and pack design is changed to the fictional "Gator" brand.

Contacting the radio frequency 140.07 with the Cigarettes equipped will allow the player to listen to music from the in-game soundtrack. During this time, Snake's transceiver portrait will also have the cigarette in his mouth. The exact positioning of the cigarette varied depending on the version of the game being played: In the original version, it's located near the left portion of his mouth, while in the re-released versions, it's on the right portion of the mouth.

The Fogger (発煙筒, Hatsuentō?, literally "Smoke Emitter") was used in Metal Gear: Ghost Babel to detect infrared security beams. A smoke generator, it is the only such item that doesn't deplete Snake's health. It is described as a "Device that lights up and emits smoke." It was primarily added in for the younger age bracket. Although Snake is seen smoking briefly in the opening scene of the game, the cigarette itself is hidden from view.

In Metal Gear Solid 2: Sons of Liberty, the Cigarettes will help to steady the player's aim in First Person View, though the Life Gauge will still deplete. The demo indicated that the cigarettes were originally going to require refills like ammunition and rations, even having its own item box, although this was ultimately cut from the final release.[10] The opening scene for the Tanker Chapter featured Solid Snake disposing of his still-lit cigarette into the Hudson Bay just before removing his raincoat and activating his stealth camouflage in order to illicitly board the Discovery tanker. This led to a lot of controversy, which ultimately influenced similar instances in later games, such as Snake Eater.[11]

Although the cigarettes don't appear in Metal Gear Solid 3: Snake Eater due to Naked Snake preferring cigars, a narcosis gun that is modeled after a cigarette can be obtained by the player. In Metal Gear Solid: Snake Eater 3D - The Naked Sample, a GRU soldier intends to smoke some cigarettes while on patrol in Dolinovodno, though he accidentally fumbles the cigarette box and drops it into an ivy patch near Naked Snake's hiding position. The soldier then searches for it by poking his head out of the hole, and then attempts to feel for it blindly, with Snake narrowly avoiding being discovered. Eventually, Snake covertly helps the soldier by handing the cigarette box to the soldier. In addition, the reason Naked Snake stamped out his cigar before commencing the HALO Jump in the beginning of the Virtuous Mission chapter was as a response to the aforementioned complaints made against Metal Gear Solid 2 regarding Snake's disposal of a lit cigarette.[11]

The Metal Gear Solid novelization portrays how Snake got cigarettes onto the island differently. Instead of smuggling them inside his stomach, Snake stole a pack of them from a Genome Soldier, and had to adjust to its taste throughout the mission.

In Metal Gear Solid 4: Guns of the Patriots, the Cigarettes replenish Snake's Psyche, but lowers his Life. Also, if guards smell the smoke, they will investigate to find the source. In a pre-release trailer, Otacon initially thought that Snake quit smoking, but Snake admits that the reason why he hadn't smoked in a while was because he didn't have a light until he saw a still radiating burn on the wall.[12] In addition, examination of Sunny's character model's back pocket, while she is wearing an apron, shows she has a case of cigarettes. Aside from gameplay, the loading screen for the game also depicts Old Snake smoking a cigarette.

Although not actually usable in Metal Gear Solid: Peace Walker, cigarettes are alluded to frequently by various characters, either having smoked them directly (Huey, Cécile, and Amanda) or otherwise simply selling them (Miller), with the Artbook having sketches of Gálvez/Zadornov having a cigarette in his mouth. Electronic cigarettes were not actually developed during the game's setting, although they were patented in 1963. A real life example of electronic cigarettes include the Australian tobacco company Vapor Kings.

In Metal Gear Solid V: Ground Zeroes, a bald Marine smokes a cigarette after talking to an undercover agent. In addition, in Metal Gear Solid V: The Phantom Pain, a briefing file for the weapons dealer depicts him smoking, and various enemy soldiers can be seen smoking cigarettes during guard duty if the player hadn't triggered an alert. The concept art for Quiet included in The Art for Metal Gear Solid V also included two designs that had Quiet having a cigarette boxes strapped to her arm as well as artwork of Quiet sitting and smoking a cigarette, although it was never indicated in-game whether she smoked at all, let alone cigarettes.

A render for Gabriel Belmont in Castlevania: Lords of Shadow with the Solid Eye and Bandanna depicts him smoking a cigarette. 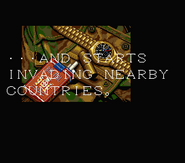 "Bal Mal" cigarettes amongst various other equipment, in the original Metal Gear 2 opening. 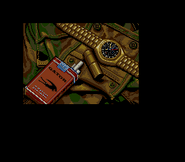 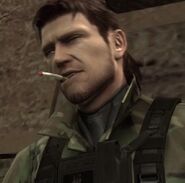 A FaceCamo-equipped Snake, smoking a cigarette in a Metal Gear Solid 4 cutscene.

Quiet concept art depicting her smoking cigarettes/carrying a box on her arm.

Community content is available under CC-BY-SA unless otherwise noted.