A cigar is a tightly rolled bundle of dried and fermented tobacco that is ignited so that its smoke may be drawn into the mouth.

A cigar is one of the oldest forms of tobacco smoking, and is distinguished from a cigarette in that, besides their obviously being larger than the latter, they are contained by a wrapper made by tobacco leaves rolled into a cylinder. In some cases, the cigars are closed at the end with the "wrapper", which necessitates cutting off the end before smoking the cigar. It generally takes an estimate of 20 minutes to a full hour to finish smoking one cigar. As cigars require a constant temperature and humidity to remain functional, it is generally stored in a humidor. The main centers for cigar production include Cuba, the Dominican Republic, and the Philippines, with Havana leaves being a common ingredient for Cuban cigars and Manila leaves for Filipino cigars. Like cigarettes, cigars also have health hazards due to their containing nicotine. Because of their taking very long to finish, they can also act as a substitute for torches in dark areas.

Renowned American soldier The Boss once smoked cigars, though she quit sometime prior to the events of the Virtuous Mission.[1]

In late 1964, Naked Snake carried Habano-brand Cuban cigars with him during the Virtuous Mission and Operation Snake Eater.[2] He was annoyed whenever people either mistook cigars for cigarettes or treated both as the same thing.[3][4] Immediately prior to making his HALO jump in the Virtuous Mission, Snake smoked a cigar in the back of the plane, much to the annoyance of his instructor and Major Zero, before stamping it out.[5] After Snake was hospitalized following the first mission's failure, Zero visited him in an ICU, and provided him with a cigar.[6] Aside from recreational use, Snake also used them to burn leeches from his body, and as an improvised torch in darkened areas.[1]

While meeting with clients prior to the Peace Walker Incident in 1974, Snake's lighter stopped working in the rainy weather in Colombia, and he was unable to smoke a cigar. Ramón Gálvez Mena then offered him the use of his own lighter, which was built into the forefinger of his prosthetic hand. Snake later supplied Sandinista National Liberation Front comandante Amanda Valenciano Libre with a Cuban cigar after rescuing she and her troops in Rio del Jade, Costa Rica. Amanda's brother Chico intended to smoke one of Snake's cigars after he was seemingly given one, though Snake immediately snatched it back when it was lit, telling Chico that it wasn't for kids.

Big Boss continued to smoke cigars in the 1980s after he came out of his coma. He smoked one while on a motorcycle, prior to riding off in Western Ormideia.

Big Boss smoked his last cigar with Solid Snake in 2014, while succumbing to the effects of the new FOXDIE virus.

Venom Snake used his prosthetic hand as a cigar lighter. He smoked one in Afghanistan while rescuing Kazuhira Miller from the Soviets. He used a special electronic cigar known as a phantom cigar, which contained Wormwood, a herbal drug that sped up his perception of time when smoked, as well as had some anesthetic affects.[7][8] On his birthday, he smoked a traditional cigar on Mother Base, which was ignited by sniper rifle fire from sharpshooter Quiet. In addition several crates on Mother Base also contained a significant amount of cigar packs, although the crates had sustained some damage due to Quiet, in her own way of greeting Venom Snake a happy birthday during his aforementioned birthday celebration, shot the initials "HBD" into the boxes with her sniper rifle.

Although Ocelot himself didn't smoke cigars, he did help Big Boss light his cigar in Cyprus as his last deed for him before the latter went into hiding in 1984.

During his 2014 insurrection against the Patriots in 2014, Ocelot, then going by the moniker of Liquid Ocelot, smoked cigars in a manner similar to his "father," Big Boss.

Colorado senator Steven Armstrong frequently smoked cigars. He smoked a cigar when meeting up with Samuel Rodrigues before having his "final interview" with him in 2016, and later when meeting with Raiden in 2018 before fighting him with Metal Gear EXCELSUS, and later after beating Raiden atop the mech, during their fight in Pakistan.

The Cigar is a support item that appears in Metal Gear Solid 3: Snake Eater. Its function is almost identical to the Cigarette from previous games as it slowly depletes the Life Gauge whenever it is equipped. However, the Cigar also has additional uses, such as removing leeches in the Survival Viewer, driving away hornets, or providing some illumination in dark areas.

The cigar brand Habano, as seen in-game, is fictitious, although there is a real Cuban tobacco company called Habanos S.A. It is most likely based on the H. Upmann No.2; a favorite of President John F. Kennedy.

At the beginning of the game, Naked Snake stomps out his cigar prior to performing his HALO jump. This was specifically added in to address the angry response the development team received when Solid Snake tossed a lit cigarette into the Hudson Bay in Metal Gear Solid 2: Sons of Liberty.[10]

Although Big Boss does not smoke cigars in Metal Gear Solid: Portable Ops, he does make up a story about intending to order one, if the player should make radio contact with Major Ocelot.[11] In Metal Gear Solid: Peace Walker, Big Boss only smokes cigars during cutscenes.

Big Boss is sometimes seen smoking cigars inside the MSF helicopter between missions in Metal Gear Solid V: Ground Zeroes. In Metal Gear Solid V: The Phantom Pain, Venom Snake smokes both real cigars and an electronic version, the latter being available for use in gameplay as the Phantom Cigar. There is a brand name of cigar called Phantom in real life.[12]

During the 12 Days of Metal Gear event, the seventh day had "5 Cigars Smoking", referring to Big Boss smoking them on the main menu.

Venom Snake smoking an electronic cigar in a trailer for The Phantom Pain.

Big Boss smoking a cigar in a trailer for The Phantom Pain. 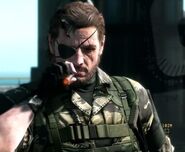 Venom Snake with the Phantom Cigar in The Phantom Pain. 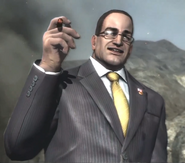 Senator Armstrong with a cigar in Metal Gear Rising.
Add a photo to this gallery

Retrieved from "https://metalgear.fandom.com/wiki/Cigar?oldid=272051"
Community content is available under CC-BY-SA unless otherwise noted.