Chrysalis was an AI weapon developed by the CIA Peace Sentinel in the early 1970s. Its main function was to serve as a VTOL attack craft.

Chrysalis was one of the four AI weapon types developed by Huey Emmerich as part of the Peace Walker Project. As with all AI units, it was equipped with an AI pod, designated TJ-Chrysalis-6000. It was divided into two units: a freely-moving front unit and a rear section, connected by a bar. Three propeller units gave it great aerial maneuverability. Due in part to its unmanned status, Chrysalis could utilize extreme G-force maneuvers that most aircraft of the time were incapable of, allowing it to quickly evade missile attacks. If significantly damaged, the Chrysalis will end up landing temporarily while the AI fixes it, with the AI also doing repairs while it is still in the air. It was also capable of airlifting objects that are at least as heavy as 500 tons. This is especially evident with its airlifting Peace Walker from the Crater Base.

Chrysalis was armed with four missile launchers, holding a capacity of two missiles in each, along with chainguns. It also carried a rail gun on the left side of the rear unit, and utilized unmanned "kidnapper" drones, each possessing a grappling line and machine gun. The AI would often foreshadow its attacks by a burst of song from its speech synthesis system.

In 1974, Chrysalis was deployed in Costa Rica to combat Sandinistas that had fled Nicaragua, led by Amanda Valenciano Libre. They were attacked at a nearby boathouse after the Peace Sentinels managed to locate it, and Amanda's brother, Chico, was captured by one of its kidnappers. It later attacked Amanda just outside of Bananal Fruta de Oro's gate, with Naked Snake locating it due to a Kidnapper approaching that area and preventing her capture, nearly at the cost of Amanda's life.

Afterwards, Chrysalis arrived at the Mt. Irazu AI weapon facility to transport Peace Walker away along with the Peace Sentinel's leader, Hot Coldman's, Hind D. The AI weapon almost discovered Snake near a river in Central Heredia, though it was distracted by the mercenary's escaping mule. The Chrysalis later attacked Snake just outside the Mayan pyramid AI lab, but ultimately fell to Snake and the Militaires Sans Frontières. Several of its parts, including the rail gun and the radome, were later salvaged by the MSF to create Metal Gear ZEKE.

Chico went on to sell Snake's photograph of Chrysalis to a magazine, claiming it to be a UFO, which led to Grenadan Prime Minister Gairy requesting that the U.N. set up an agency to investigate the "UFO problem."

The term "chrysalis" refers to the pupal stage unique to butterflies in which a caterpillar expands its skin and forms a protective casing to protect itself during metamorphosis. Appropriately enough, the Chrysalis AI greatly resembled a butterfly in shape and design.

The Sandinistas referred to the Chrysalis as el colibrí, which translates to "the hummingbird" in Spanish. Its Kidnapper drones were thus termed el chicolibrí, a portmanteau of the words chico and colibrí, meaning "boy" and "hummingbird," respectively.

Amanda's Sandinistas sometimes referred to the Chrysalis as hombre nuevo (Spanish for "new man"), though they were reluctant to do so, to avoid insulting the memory of Che Guevara, who had also been referred to as such.

According to Kojima Productions artist Yutaka Negishi, Chrysalis was originally intended to be capable of landing, and also had a design of Chrysalis in landing mode. However, it was removed from the final version.[2]

The song sang by Chrysalis, is "Sing" by the Carpenters, which was released in 1973 for the LP album Now and Then. It's very same song recorded in Cécile Cosima Caminades' tape. If Cécile is contacted by radio during the battle with Chrysalis, she will recognize the AI weapon's voice as being "that woman from the lab."

Chrysalis, alongside the other AI weapons, was also made as an action figure for the Peace Walker line of the Square Enix toy-making subsidiary Play Arts Kai. It came with a code to unlock a soldier when inputted.

The Chrysalis was later given two AI voice DLC. The first utilized alternate voice data giving it human qualities and was voiced by either Vanessa Marshall or Yumi Kikuchi (depending on the release). The second, released in Japan only, gave Chrysalis's voice a Kansai dialect.

"CHRYSALIS: Human Voice
This is the alternate voice data for the "CHRYSALIS" AI weapon. (V.O.: Vanessa Marshall)
When downloaded, this will change the voice for the respective AI weapon from EXTRA OPS."
―CHRYSALIS: Human Voice DLC PSN description for the International release of Metal Gear Solid: Peace Walker

Chrysalis appeared on Versus Battle on the series official website, where it fought against Peace Walker (the latter identified as Basilisk).

Chrysalis also appears in Metal Gear Solid: Social Ops as a boss as well as a series of cards. In addition to both its ordinary/Type II forms as well as its Custom Forms, it also has a golden card.

In addition, the player can also develop a Chrysalis as their Metal Gear in the Mother Base development game in the Ground Zeroes app, accessible after upgrading the Hangar strut to level 3. It costs 300 materials to create. The player can also unlock a custom version of Chrysalis by obtaining a score of 60k+ on Hard Mode of Eliminate The Renegade Threat while connected to the app.

The Chrysalis's railgun uses rounds that will destroy any cover that the player attempts to hide behind.

If you are grabbed by one of the kidnapper drones, move the analog stick left to right rapidly to escape. The Chrysalis does not stop its attacks while the kidnappers are present, so avoid standing still.

When the Chrysalis begins charging its railgun, it will target you with a red laser. Quickly take cover in the narrow passage near the southeast corner of the map. If you're not close to the southeast, run away and execute a roll as it fires. You can also take this opportunity to hit the AI pod with a rocket, since Chrysalis won't avoid it, and it will cause it to stop the attack. The southeast passage is also a great place to deploy a support supply marker since it's the place that offers best protection.

If you do not wish to salvage the Radome, then destroying it will prevent Chrysalis from dodging missiles and RPGs.

Once the Chrysalis is incapacitated, it will land near the entrance to the lab. Run up the stairs and be prepared to blow the hatch on the AI pod. Once inside the pod, collect as many memory boards as possible. Sometimes, it lands directly on the grounds near the stairs, if such is the case, go over to the grounds and blow the hatch on the AI pod.

One should note that using the FIM-43 is the best weapon to take down the Chrysalis when facing it the first time (due to its lock-on ability), but it might destroy the Railgun. To avoid this, make sure your FIM-43 rocket is away from the Railgun. If you want to salvage the railgun with less probability in destroying it, try using the LAW and a machine gun. This is much more difficult as the Chrysalis tends to dodge the LAW rockets at the last moment. To counter this, use a Chaff Grenade and quickly fire at the Chrysalis. This also becomes easier once you acquire the LAW Rank 3 or higher.

The kidnapper drones deployed by Chrysalis Custom are much faster and more accurate and thus cannot be disregarded as threats.

Attacking the small tail rotor at the back of the Chrysalis deals more damage than attacking the AI pod.

Chrysalis Charging through the air 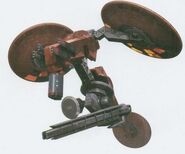 Chrysalis, alongside Peace Walker, in a test for the Fox Engine.

Retrieved from "https://metalgear.fandom.com/wiki/Chrysalis?oldid=270974"
Community content is available under CC-BY-SA unless otherwise noted.