A card key or key card is a flat, rectangular card that stores a physical or digital signature, which can be used to disengage a card key lock on a door. They eventually became outdated in the aftermath of the Guns of the Patriots Incident in 2014, due to advances in cyborg technology relegating ID directly into the left limb of a cybernetic soldier, although they did still see some minimal usage.

A punch card is a piece of stiff paper that contains digital information represented by the presence or absence of holes in predefined positions.

The warehouse at Ponizovje, Tselinoyarsk utilized punch card systems for some of their doors during the 1960s.

The missile silo on the San Hieronymo Peninsula utilized this system during the early 1970s.

IC cards were used in the fortress of Zanzibar Land to unlock doors of various security levels, and in some cases, up to three system levels. They were also used as part of ArmsTech's Permissive Action Link system for the nuclear warheads stored on Shadow Moses Island.

A personal area network card utilizes a computer network for communication with other devices, in proximity to an individual's body.

In the 2000s, PAN cards were used in the facilities of both Shadow Moses and the Big Shell, also serving as ID cards for base personnel. The card system transferred data by passing minute electric currents using the salt in the user's body as a transmission medium. PAN cards could be carried anywhere on one's person and unlock doors automatically. During the Big Shell Incident, Otacon was supposed to get PAN cards for the SEAL Team 10's Bravo Team, while undercover as a chief architect of the facility's security systems, but failed to do so.

In 2016, the World Marshal Inc. HQ building utilized three card keys, each of which were given a specific color: Red, Blue, and Yellow. One led to the heliport/penthouse of the HQ, one led to the immediate premises of the server room, and one led to a storage room on the same floor. The Brazilian freelance swordsman/mercenary Samuel Rodrigues, during his raid at the HQ building, attempted to find the card keys so he could access the penthouse and confront U.S. senator/unofficial World Marshal CEO Steven Armstrong.

In 2018, during the Abkhazian Coup, one of the cybernetic soldiers under the employ of Desperado had been tasked with keeping a card key on a force field over a portion of the city. LQ-84i, upon escaping captivity by tricking Mistral, ambushed the guard and stole his pass so he could enter the gate, having deduced its use from Mistral's taunts. However, it was later revealed that Mistral had deliberately worded her taunts in such a way that ensured that LQ-84i would deduce how to escape the force field as part of her plan to get fellow Desperado member Khamsin killed by the LQ-84i.

Hideo Kojima, the creator of the Metal Gear series, originally wanted to force the player to use trial-and-error to figure out which cards worked for which doors. He was inspired by the classic George A. Romero horror film Dawn of the Dead. In one of the scenes, one of the characters has to go through several keys in order to try and open a door with zombies approaching. Just as the zombies are about to attack, he finally picks out the right key and moves to safety. Kojima wanted to give players this sense of dread and urgency in his game. While he was able to implement this in Metal Gear and Metal Gear 2: Solid Snake, it was somewhat minimized in the latter with the addition of master card keys. He decided not to implement it in further games as it would become too "troublesome."

In Metal Gear Solid and Metal Gear: Ghost Babel, ID cards are backward compatible, allowing access to any doors equal to or lower than the card's security level. Though the card itself must be equipped in order to open doors, this was not made a requirement in the sequel Metal Gear Solid 2: Sons of Liberty as well as the remake, Metal Gear Solid: The Twin Snakes.

Card keys do not make an appearance in the main game of Metal Gear Rising: Revengeance, although they did appear in the Jetstream and Blade Wolf DLC as well as the E3 Demo. In addition, they were also mentioned in the main game during a Codec conversation with the character Doktor regarding left hand ID tags in R-01, with the implication that the card keys had long been outdated and replaced with cybernetic left hands.[1] 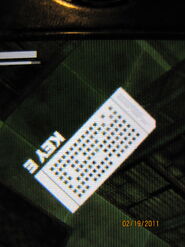