The Canard Rotor/Wing is a class of VTOL aircraft with fixed-wing and rotary-wing flight. One of the more famous examples was the Hammerhead, a mass-produced variant of the class in use since at least 2014, as well as the first one to enter public use. The Hammerhead had a large two-blade rotor that locked in place and was used as a wing surface for high-speed flight. Its primary weaponry were AIM-9X Sidewinder missiles and a chin-mounted M230 chaingun. It also had a spotlight at the tip of the fuselage next to the chaingun.

The Canard Rotor/Wings utilized fixed-wing and rotary-wing flight (hence its name). As such, they were able to do so by having the canards (far front wings) and the tailwings act as sufficient air cushions to allow for it to maintain flight while the aircraft transitions between phases. The rotor was equipped with a jet nozzle to provide the propulsion to keep it hovering when in rotor mode, and in flight, the rotor becomes fixed and acted as the primary wing of the vehicle. The design was also simpler than most prior helicopters, and even cut down on the aircraft's overall weight. It also made maintenance much easier. When in flight mode, it was also given a decisive speed advantage due to it utilizing the same overall concepts as other jets. As such, it was also well suited as an escort for tiltrotors. It also had the tip-jet concept in its design, similar to the World War II-era German conceptual aircraft, the Triebflügel.

The Canard Rotor/Wing first entered development as the Boeing X-50 Dragonfly, in an attempt to produce a helicopter that could transition to fixed-wing flight in mid-air. It was funded by DARPA and could take off and hover well enough during the initial stages of the project, but problems with the mid-air transition between rotor and fixed wing forms and vice versa resulted in the project's initial cancellation in 2006. Eventually, the designs found their way into AT Corps' hands, and they picked up where Boeing and DARPA left off, eventually fixing the initial problems by having the tail wings and the canards (the far front wings) keeping the vehicle in fight during transition phases, resulting in the creation of the Hammerhead.

During the Guns of the Patriots Incident in 2014, Hammerheads were used by Outer Heaven PMCs in the Middle East and South America.

Samuel Rodrigues fought against a Hammerhead immediately prior to fighting Steven Armstrong on World Marshal Inc. HQ's heliport. Several Hammerheads were also utilized by Armstrong to power himself up to his maximum form, and later to use them as makeshift missiles midway through. Sam later used a Hammerhead as a means to launch himself back at Armstrong, after he was thrown at it.

Hammerheads were utilized as Unmanned Gears by Desperado Enforcement LLC. and World Marshal in 2018. Several were utilized in the mission in Abkhazia, where they ambushed Raiden at a bridge and fired missiles at him, destroying much of the bridge in the process. Several were used by Desperado captain Monsoon during his fight with Raiden as makeshift missiles via the magnetic properties of his cyborg body, while another three were later used by Sundowner against him. Sundowner, nearing defeat, later attempted to use a Hammerhead as a last ditch effort to kill Raiden, with Raiden adopting a Slider to fly in pursuit of the chopper, and eventually having the Slider collide with the chopper to destroy it and send Sundowner flying right at Raiden.

The Canard Rotor/Wing is based on the Boeing X-50 Dragonfly, a failed project aimed at producing a helicopter that could transition to fixed-wing flight in mid air, which was cancelled in 2006. This account was later explained in Metal Gear Rising: Revengeance.

The aircraft first appeared in Metal Gear Solid 4: Guns of the Patriots but were not actually named in the game itself. The novelization of the game supplied them with their name, "Canard Rotor VTOL scouting craft."[1]

A possible variant of the CRW appears twice in a pre-release trailer for Metal Gear Solid 4, showcasing the Gekko.[2] Its overall shape is different to the aircraft seen in the final game, ranging from the two missile launchers on its fins, and the size of the main rotor and ailerons. It is possible that this was an early model for the CRW, though it is not seen in its fixed-winged formation, and does not appear in the final game.

Hammerheads first appear as Raiden is crossing a bridge in R-01, triggering a brief sequence where he must run to escape the collapsing bridge followed by a battle with a single Hammerhead. The Hammerhead is armed with AIM-9X missiles which can be cut in Blade Mode, a chin-mounted M320 chain gun (which they hardly ever use) and can swoop low to the ground to ram Raiden, an attack they telegraph by rising high into the air. They are vulnerable to the Homing Missile which will severely damage and often stun them, and to attacks with the Dystopia Sai which can do likewise.

The Hammerhead AI will often malfunction when severely damaged and fire off all its missiles at once, which allows Raiden to use his Ninja Run to jump up the missiles and attack the fuselage. Hammerheads have no weak point to attack with Zandatsu; if destroyed normally they will drop an Electrolyte Pack, while if Raiden runs up their missiles they will not drop anything at all, which can leave him at a disadvantage since there is no way to recover FC from them directly.

Although implied to be the same as Metal Gear Solid 4, there were some slight differences in the design, such as the location of the chaingun on the fuselage. This was probably artistic differences, however.

The trophy/achievement "Jumping the Shark," is awarded for destroying 10 Hammerheads. The name of the achievement/trophy is a reference of the phrase that usually means that a work is beyond salvagable after a specific event. It was coined from an scene on the show Happy Days where one of the main characters, Fonzie, proceeded to jump over a caged shark as part of a waterskiing stunt during a vacation at Hollywood.

The Hammerhead also was featured in the Versus Battle section of the official Metal Gear Solid website, although it was identified simply as "Attack Chopper."

MGS4 artbook page, including concept sketches and renders of the (at the time unnamed) Hammerhead.

A Cyborg Raiden jumps atop missiles fired from a Hammerhead.

Monsoon preparing to throw a helicopter at Raiden.

Raiden attacking the hammerhead. Note the name below the HUD

CRW prior to gekko attack 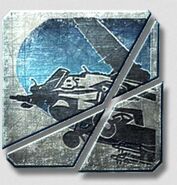 The achivement you get for destroying 10 HAMMERHEADS